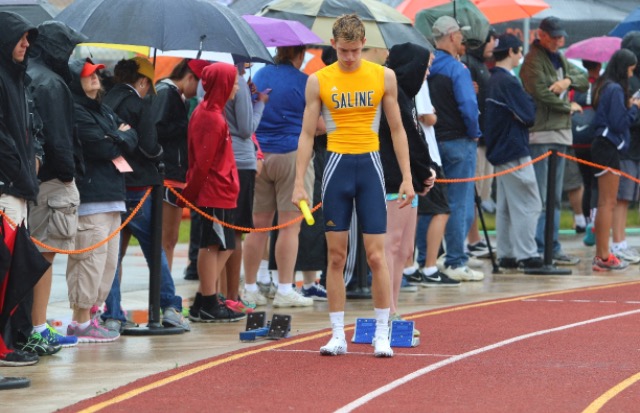 Freshman sprinter Jake Kellersohn thought the long-jump was what he wanted to do as he entered his freshman year of high school. But fate told him otherwise. Four years later, he finds himself in a surprising situation.

While the first day of spring almost always occurs on March 20, Michigan is known to be an exception. The cold, snowy weather lasts well into March, not caring if spring sports are in action for high schools.

Playing in the cold may not seem like a big deal for the athletes. Spectators cringe at the thought of sitting outside in the cold watching athletes run around the bases or around the track, but they don’t give much worry to the athletes themselves. Some athletes are suited up, they think, and they are constantly active in some way, keeping their body warm. Yet, that’s not always the case.

Cold weather causes muscles to tighten, and if proper precautions aren’t taken, it can cause serious injury.

According to the National Athletic Trainer’s Association website, wind, along with cold temperatures, takes much of the heat out of an athlete’s body.

Along with that, it is always important to stretch and prepare your body for events, and even more so when conditions like this occur because muscles are tighter than normal.

During the first meet of his high school career, Kellersohn learned what not preparing properly can do to your body.

“I had not stretched very well,” Kellersohn said. “I went and jumped, and I landed a little funny, and then my hip was in pain. It wasn’t a sharp pain, but it lasted a while.”

He was checked out by his high school’s athletic trainer and a doctor. Both did not think anything serious had happened. His doctor ordered an X-ray just to be safe.

The results came back and shocked everyone: an avulsion fracture at his left hip was the reason for his pain. An avulsion fracture occurs when a small chunk of bone that is attached to a tendon or ligament gets pulled away from the main part of the bone.

That happens due to extremely tight muscles. When an athlete’s muscles are so tight they can pull a piece of the bone apart from the rest of the bone.

The injury sidelined him for three months. He couldn’t do any strenuous activities. Walking was the limit for him. After his recovery, he thought his track and field career was done. He gave up the most popular sport in his town and transitioned to basketball.

He played basketball for the next two years and was a team captain, but it wasn’t what he loved to do.

“Senior year came around, and basketball wasn’t what I wanted it to be,” he said, “and then I decided to run track.”

He went into the season expecting to do long-jump again, and did so for the first three meets.

Then one day, a friend mentioned the idea of him running the 100-meter dash “just so you’re not sitting around doing nothing all day.”

Kellersohn took it into consideration.

The first event he ever took part in was against a field full of freshman. That may not seem very daunting, but the idea of losing to people three to four years younger than him made him nervous.

Kellersohn finished the meet roughly 40 meters ahead of the pack. To put that in perspective, 40 meters is almost 44 yards. Kellersohn won his first meet by almost half the length of a football field. Needless to say, he found the event where he most excelled.

“After he started running his senior year, I looked at him and said, ‘Where the heck have you been?’”

His coaches began putting him in the 100-meter dash, where he became the school’s top runner, and the 400-meter relay team, which he helped guide to a state championship at the Michigan High School Athletic Association State Finals, breaking the school record in the process.

Leslie believes Kellersohn was an integral part of the championship his team won last year.

“Him being a part of this team helped us win state,” Leslie said.

Leslie added that his progression from partaking in very little his freshman year to being a “basketball kid” and then a runner was surprising.

“What’s interesting is that as a freshman, he wasn’t a varsity athlete,” Leslie said. “We have over 100 runners in our program, so I didn’t remember him his freshman year at all.”

The team was also on their way to nationals to compete with schools from all across the country, but an injury on the team prevented that from happening.

“Based on the times [they had recorded during the season], we could have been All-American,” he said. “It would’ve been incredible.

“It all escalated so quickly,” he said of that season. “It was hard to wrap my mind around it at the time. It was ridiculous how fast everything was going.”

“He’s a hard worker, just a grinder,” Burns said. “With his work ethic, he’s not going to back down from a challenge. He’s got a lot of fast times ahead of him. He’s going to be one of the key contributors [in the future].”

“I thought I was going to get blown away and these guys, who were at the top of their game, were just going to dust me,” Kellersohn said. “But I was with them, and I was competing. It was such a good feeling. It was even better than running at states in high school. This was a whole new level and a whole new thing for me to try to take on and conquer.”

Later, he was invited to participate in the Meyo Invitational in South Bend, Indiana on Feb. 5-6.

The Meyo Invitational is an elite event that only invites the top runners in the country. To even be considered for the event runners have to meet certain times during the beginning of the season and have those times submitted to the invitational organizers for consideration.

Kellersohn didn’t think he deserved to be at the meet that weekend.

“I remember thinking, ‘Why am I here? What am I doing here?’” he said. “These are some of the best kids in the country.”

Burns called it “one of the most elite meets in the Midwest.” Kellersohn was one of four freshmen from Butler to go.

“I gave him a goal for him to get to Meyo, and he met that,” Burns said. “You could tell he was anxious and ready to [run at the meet]. And he ran a season best time.”

Kellersohn acknowledged how nervous he was.

“I was nervous all day,” he said. “I didn’t run until 9:30 p.m., so I was nervous. Just sweating, shaking and just trying to calm myself down…I was a mess. When it came time to race, I calmed myself down. I saw some of the people I was running against and I thought, ‘Man, I don’t know how this is going to go.’”

At the meet, Kellesohn placed 48th in the 200-meter dash with a time of 22.98 seconds, a new personal record for himself at the time.

“I just remember thinking, ‘Alright, that wasn’t bad. You did pretty good.’”

Leslie believes that Kellersohn’s true potential will come out now that he is focusing on one sport.

“With just running track, the sky’s the limit,” he said.

Kellersohn has leaped over every hurdle that has gotten in his way thus far and succeeded in the process. He doesn’t know what the future will hold. In his defense, he is only a freshman. But for the moment, he is just glad to be a part of this team.