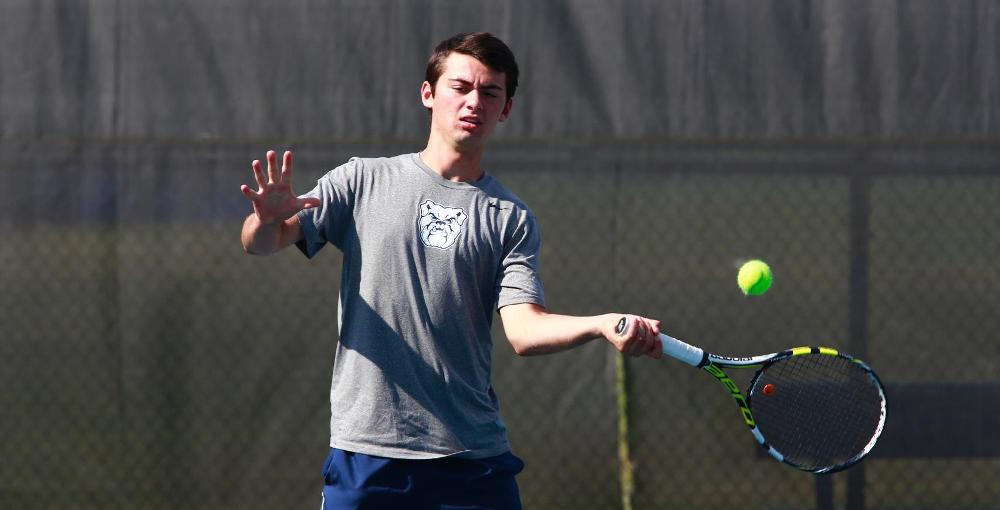 Freshman Mason Dragos provided the heroics for the Butler University men’s tennis team in a 4-3 win over Northern Illinois University on Feb. 19.

Make no mistake—the Bulldogs made a team effort to boost their season record to 3-6. Freshmen accounted for all four of Butler’s points. The Bulldogs lost the doubles point, but two-set singles victories from freshman Spencer Lang and freshman Ari Gerstein helped them bounce back.

“This win feels amazing, especially after losing last week,” he said. “We worked really hard in practice and focused on implementing what we worked on. We executed that stuff really well.”

The Bulldogs were down 2-3 late in the match. They could feel their backs against the wall, but freshman Adrian Mag rose to the occasion by winning 6-7, 7-5, 6-2.

“A win is a win, even if it is ugly,” he said. “I am going to try to carry this into the next weekend by pumping up all of my teammates all week and trying to have the same energy to get prepared.”

Once Dragos saw Mag, his roommate, clinch his match, Dragos said he felt a surge of confidence.

Butler will head east to play a weekend series against Cleveland State University on Feb. 26 and the University of Toledo on Feb. 27. Both matches against the Vikings and Rockets are slated for 7 p.m.