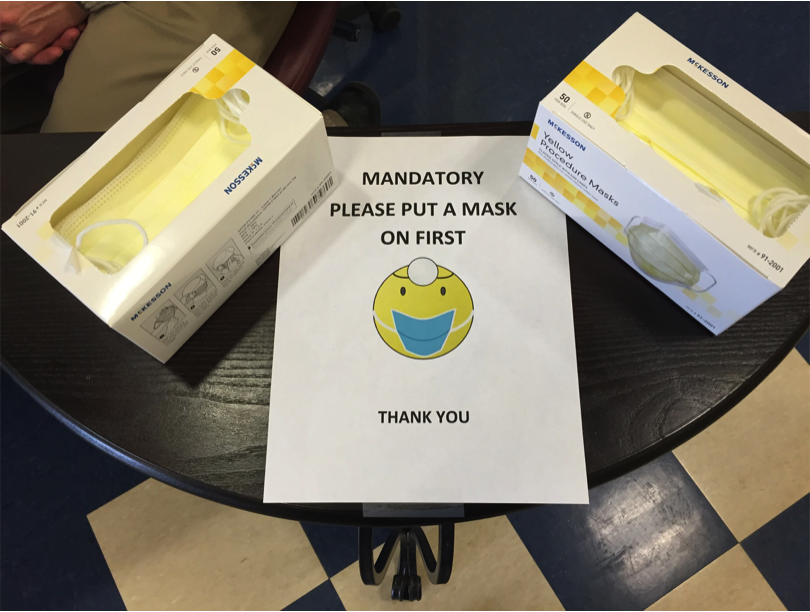 The word “mumps” has been a part of Butler University student’s daily conversations for the past week.

Butler students received their typical, daily Butler Connection on Tuesday, Feb. 16. Among the typical events and announcements, students found a link that was more unusual – about the mumps. A few days later, more mumps news came in an email. This time, students were told they need a booster shot to help them steer clear of the mumps.

A sign asking students to put a mask on before entering Health Services was placed outside the room. Photo by Blakely Heaton.

Mumps have infested Butler University and caused an outbreak— and the university is attempting to limit the spread and keep its community healthy.

What are the Mumps?

The Center for Disease Control and Prevention (CDC), defines the mumps as “a contagious disease caused by a virus.”

Symptoms of the mumps include, but are not limited to: fever, headache, loss of appetite and muscle aches. A common experience of the mumps is a severe swelling of the jaw. Mumps’ symptoms seem normal, but they are unique in that they won’t appear until 16-18 days after a person becomes infected/exposed to the virus. Everyone’s experience with mumps will be different. Some people could have very mild symptoms and others could experience more severe symptoms.

Signs line the doors of the HRC. Photo by Blakely Heaton.

Typically, those infected recover from the mumps in a couple of weeks.

Mumps aren’t very common in the United States anymore, but outbreaks are very capable of happening. In fact, many previous outbreaks have occurred on college campuses. Julie Howerton, director of Health Services at Butler University, said Butler is not the only campus affected.

“We are not alone in this,” she said. “This has happened for sometime on college campuses— The University of Iowa has 200 active cases right now, Ohio State University has had as many as 500, Kansas, IU, and Kentucky as well.”

Mumps is a contagious disease— it spreads through saliva and mucus. When people sneeze, cough or talk in close proximity, others can be exposed to it through the air. Other common ways the mumps are spread is by failure to wash hands and sharing drinks.

Kaitlyn Sawin, a sophomore marketing major, was concerned about the mumps when she first heard about it on Butler’s campus and began researching.

“I had heard of the mumps before the outbreak at Butler, but I didn’t really know what they were,” Sawin said.

Sawin also made it a priority to read the emails sent out by Butler.

“Some of their information has been confusing for students, using technical language,” she said. “I would recommend that they use simpler language, but overall they have done a great job.”

Sawin has taken extra health precautions in her daily life at Butler, including getting her MMR booster vaccine.

“I was more aware of how often I was washing my hands and how often people around me were getting sick, so I knew when to keep some distance” she said.

Sawin also noted a change in her peers since the mumps outbreak.

“Everyone has been more cautious and concerned. They have a lot of questions. The mumps has almost become a kind of a joke for some people” Sawin said.

What Butler is Doing to Protect Students

On Friday Feb. 19, Butler students received a lengthy email from the university requesting immediate action. At the time, nine cases were confirmed by the Marion County Public Health Department, the Indiana State Department of Health and Butler University.

To fight the outbreak on Butler’s campus, the Marion County Public Health Dept. required all undergraduate and graduate students, faculty and staff receive an MMR booster shot. These booster shots were offered at the Health and Recreation Complex (HRC) on Tuesday, Feb. 23 and Wednesday, Feb. 24 from 10 a.m. to 4 p.m. in the gym. On Tuesday, Feb. 23, Melissa McMasters, coordinator of Infectious Disease and Immunization Programs at Marion County Public Health Department, said they were prepared for 1,500+ people.

The turn out on Tuesday helped determine the kind of materials the Health Department would need for the next session.

“We will reassess after today’s [Tuesday’s] clinic, and if need be, we can have more vaccines available tomorrow [Wednesday],” said McMasters.

The clinic had roughly 50 people on Tuesday to help the vaccination process run smoothly.

Everyone required to get the booster vaccines will have until the end of the day on Friday, Feb. 26. Those who don’t have the original two vaccines and don’t receive their booster by this time will be required to remain off-campus until at least March 11.

Butler officials also said in the email that students confirmed to have the mumps “have been isolated,” and the people who were in contact with those people have been contacted.

University buildings are being stocked with more cleaning and disinfectants to help prevent surface contact with the mumps, and more people are being hired to help in Health Services to deal with the influx of patients.

The university created a webpage where students can stay up to date on the outbreak and learn how to stay safe. The website will be updated with all information regarding the outbreak as often as possible.

Some Butler students heard talk of the school shutting down if a certain number of mumps cases were reported— McMasters silenced those rumors.

“I don’t think there is any talk of shutting down the school at this point,” she said. “What we are doing today [Tuesday] by recommending the booster vaccine is trying to get the outbreak under control.”

How to Avoid the Mumps

The best way to prevent catching the mumps is to get the MMR (measles, mumps, rubella) vaccine.

Other ways people can avoid coming into contact with the virus include, but are not limited to, frequent hand-washing, limited close contact with others who may have been infected, and like at the Big Dawg Fair, fist-bumping instead of shaking hands.

Julie Howerton, director of Health Services at Butler, said the best thing people can do at this point is to get the booster, which increases their immune systems.

Howerton explained this is because after you get your two MMR vaccines as a child, the immunity that they give you can “wane off”– the booster will make sure your body’s immunity is where it needs to be to hold up against the mumps.

“If anyone is worried, come in and get your vaccine!” McMasters said.

What To Do If You Think You Have the Mumps

If you think you may have come into contact with the mumps or if you think you have the mumps, contact Health Services immediately to get tested. The earlier you find out the better, because then you won’t unknowingly be infecting others.