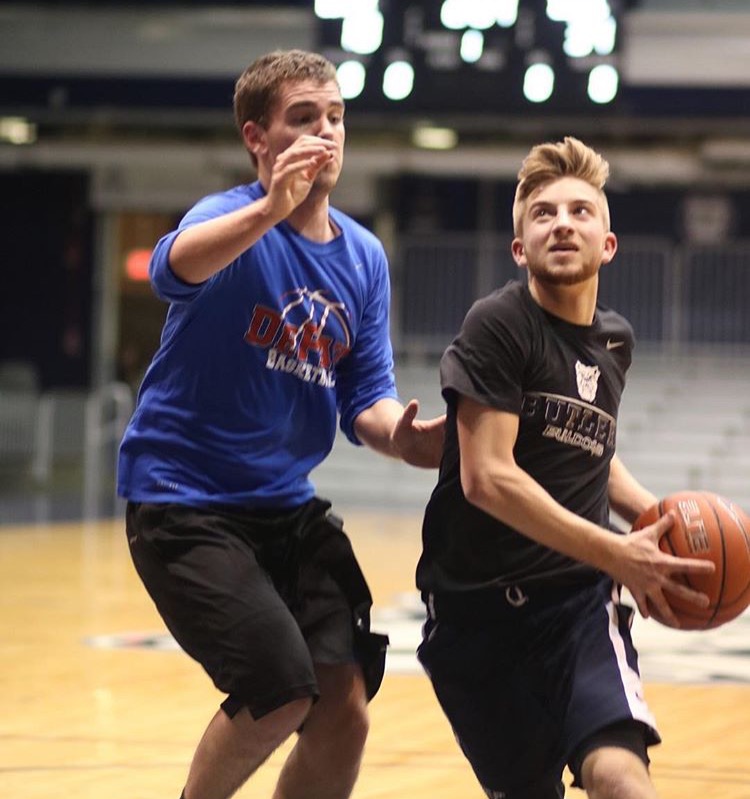 It’s not often that the light shines upon the people behind the scenes, but on the night of Jan. 26, the students that help run the Butler men’s basketball team got the opportunity to show off in the manager’s game. The Bulldog managers faced off against the managers of DePaul University’s basketball team the night before the Bulldogs and Blue Demons clash at Hinkle Fieldhouse.

The manager games started two years ago with influence from the popular Big 10 manager league, advertised by Jay Bilas and ESPN. Senior head manager Christian Murphy has been with the team for four years and has seen the growth of the program, he also has personally seen the number of managers rise from 4 to 11.

“We’ve been doing this for the past two years,” Murphy said.  “Everyone takes a fun approach, and it’s just a great atmosphere.”

Despite the outstanding play of sophomore Davis Furman, the Butler managers lost the game 76-51. Furman showed off his talent, hitting a number of shots from behind the arc, including one pull up jumper from nearly 37 feet away. The players in attendance loved the arsenal of moves that Furman used to rattle and back down his defenders.

“It’s a lot of fun to play with our guys,” Furman said. “I get to meet all of the other managers, see where they come from and how they get involved.”

Most of the Bulldog managers, including Furman and Murphy, have dreams of coaching at the college level in the future.

“I want to work my way into college coaching,” Furman added. “Hopefully, I land a position as a graduate assistant and just work my way up.”

Junior manager Pat Baker has been with the team for three years and enjoys the opportunity to play in the manager games.

“I think the managers take for granted what we do everyday, being able to be a part of the team and be around Hinkle,” said Baker. “To go from practicing, to playing an actual game on America’s greatest court is always a privilege.”

Being a basketball manager takes a lot of time, preparation and motivation. The 11 managers that Butler carries are expected to set up the locker room and court for practices and games, do laundry, code and break down game film, maintain equipment and much more that helps the team operate.

“It’s a reward for us to be able to go out and play after what we do everyday,” Baxter said. “To have the players and some fans come out and cheer for us is awesome.”

Freshman manager Sam Sturtevant, a newcomer to the team, loves the support the managers get from the players.

“It’s really special to see the players come out and watch us,” he said. “It shows that they appreciate us as much as we do them.”

The contributions that the managers bring to the program should not be overlooked. The impact they have on the team goes much further than handing out water bottles and wiping off the court. They bring a different view of the game to the table and help make life easier for head coach Chris Holtmann and his staff. The effort that the 11 managers put into the work they do is honorable and does not always get appreciated as much as it should.