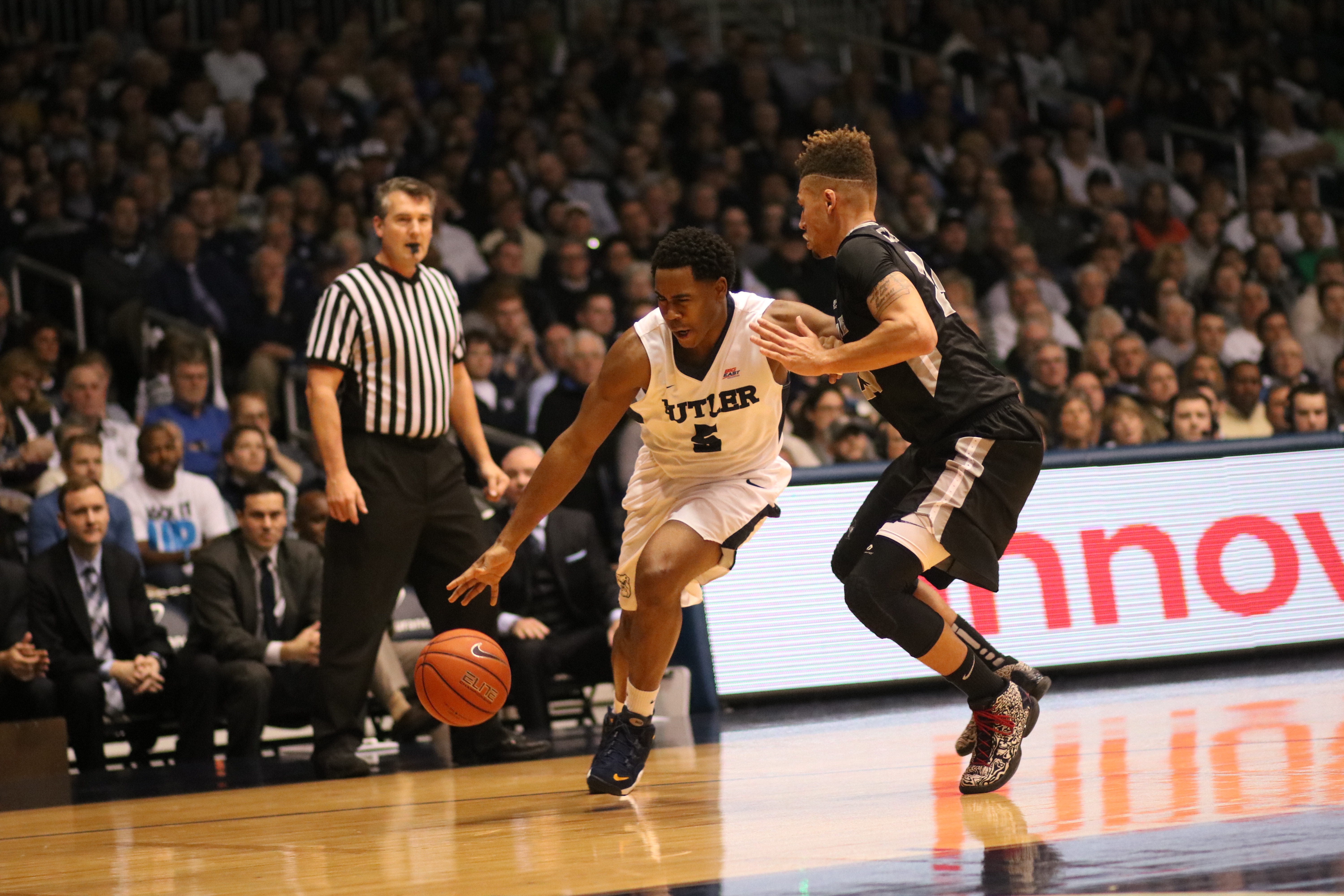 The Butler Bulldogs dropped their Big East opener on Thursday, losing 81-73 to the Providence Friars at Hinkle Fieldhouse.

It was a highly anticipated matchup, with a sellout crowd of 9,100 showing up on New Year’s Eve day to see the No. 9/10 Bulldogs take on the No. 12/13 Friars. The top-15 showdown was just the second such occurrence in Hinkle’s 87-year history, and the teams did not disappoint.

Providence (13-1, 1-0) opened the scoring with a three-pointer from Rodney Bullock and held the lead for nearly the entire first ten minutes. That’s when foul trouble started to hit for the Friars. Kris Dunn, the reigning Big East Player of the Year, picked up his second foul with 9:44 remaining and Ben Bentil did the same just seconds later.

The Bulldogs (11-2, 0-1) took advantage, going on 9-0 run, most of which took place with Dunn, Bentil, and Bullock on the bench. After four points from Providence, Butler began a new scoring run, this time running off 8 points in a row with Dunn and Bentil still sitting.

Roosevelt Jones (21) had 19 points for Butler, but the Bulldogs dropped their Big East opener 81-73 to Providence on Thursday. (Photo by Jimmy Lafakis)

Trailing by 9 with 4:19 left in the first half, Friars coach Ed Cooley put his top three offensive players back into the game despite their two fouls each. They all were able to avoid picking up another foul in the half, but the damage had been done.

The Bulldogs ended the half on a 23-8 run and took a 36-25 lead into the locker room. Cooley said that despite the halftime deficit, he was happy that the situation wasn’t worse for his team.

The Friars came out firing on all cylinders in the second half. Drew Edwards came off of the bench with 17:42 to play and immediately knocked down back-to-back threes. That sparked a 17-4 run for Providence that ended with the visitors holding a 5-point advantage. Cooley called Edward three-pointers, “the two biggest shots of the game.”

Butler was able to tie thing up three times after that point, but never took another lead. Roosevelt Jones converted a three-point play to pull the Bulldogs within three with 1:38 remaining, but Providence responded with the next seven points to seal the road win.

Butler Head Coach Chris Holtmann said that he felt his team did not come out strong enough at the start of the second half.

Kris Dunn struggled in the first half, recording 4 points, 2 assists, and 2 steals, partly because of his foul trouble. After halftime though, the Providence junior guard showed why the Big East coaches picked him to repeat as the conference’s Player of the Year this season. Dunn ran the floor and dazzled with dunks, tough layups and beautiful passes on his way to finishing with 20 points, 9 assists and 7 rebounds. Roosevelt Jones said that Butler made the mistake of trying to rush and answer back quickly when Dunn made tough shots.

“We should’ve slowed the game down when (Dunn) kept making them,” Jones added.

Bullock led Providence with a career-high 25 points and 10 rebounds, shooting 6-of-9 from behind the arc. In the team’s previous 13 games this season, the sophomore had made 7-of-26 from three-point range. Bentil added 19 for the Friars.

Kelan Martin led Butler in scoring with 20 points and also grabbed a team-leading 9 rebounds. Roosevelt Jones had 19 points while Jordan Gathers added 11. Gathers went 3-for-3 from behind the arc, but his teammates combined to shoot 0-for-14.