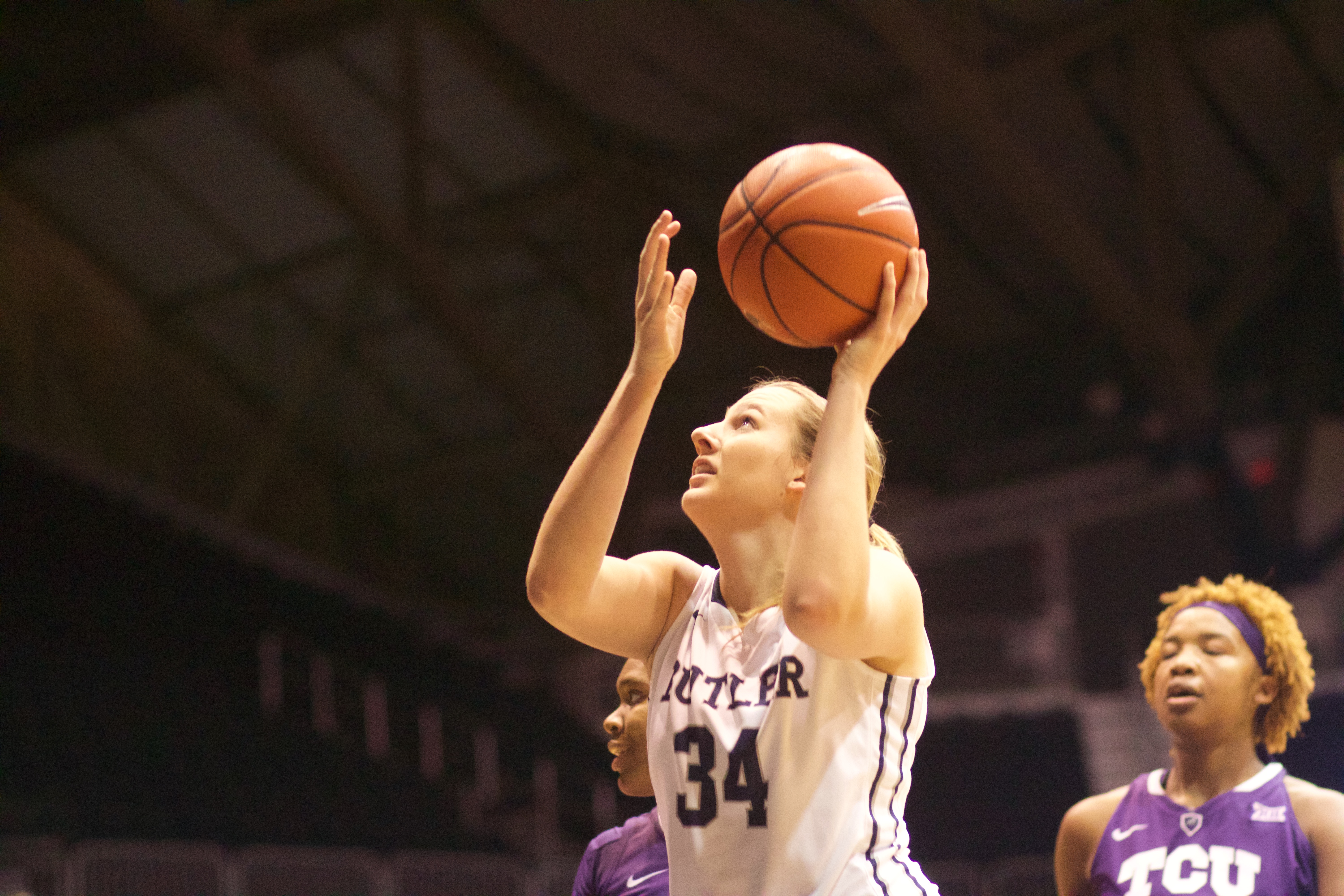 Butler women’s basketball freshman Tori Schickel is a quiet person, at least most of the time. However, her teammates have learned that when she does have something to say – well, watch out.

It’s not a nickname per se, but it’s the way Schickel’s teammates describe her personality. Butler Head Coach Kurt Godlevske sees why Schickel has earned the title.

“She’s very quick-witted,” he says. “She’s got those one-line zingers.”

Though she may be quiet off the court, it seems clear that the word ‘silent’ won’t be used to describe the freshman’s game. In the team’s season-opening win over Valparaiso, Schickel scored 29 points and pulled in 22 rebounds while shooting 50 percent from the floor and hitting 15 of her 18 free throw attempts.

That’s a pretty loud statement for someone who is known as ‘silent.’

“We played well overall,” Schickel says, “and I think that helped my success overall because I fed off of other people and what they were doing. It was just a great feeling knowing that we played so well as a team, but that helped me play well also. It was crazy. I couldn’t have asked for a better freshman debut.”

In fact, her debut was so good, that she was not only named Big East Freshman of the Week, but was also the conference’s Player of the Week. Godlevske says he was a bit taken aback by the offensive firepower that his young forward has shown early in the season. Still, the Bulldogs head coach adds that with the intensity Schickel brings each day to practice, nothing is too big of a shock.

“What you see on the floor is what we see every day,” he says. ”I mean, she comes out and gets after it, so it’s no surprise when she plays well.”

Standing at six-feet, two-inches, senior Belle Obert is the tallest player on Butler’s roster. That means matching up with Schickel each day in practice, something Obert says has been very valuable for her.

“She’s constantly getting offensive rebounds on me, so it’s really forced me to be a better rebounder and post defender,” Obert says. “I’ve loved playing with her. She’s pushing me every day in practice.”

High-intensity, grind-it-out practices are a part of being ‘the silent assassin.’ There are no fans in the seats, no cameras on the baseline. But when the chance to get better, and to help the team improve presents itself, there is no chance Schickel will be taking a pass.

“Coming in, practicing hard all the time is really big for me because I know if I don’t, I’m not giving everything for my teammates,” she says. “I’m not making them better and I’m not making myself better. That’s kind of been my attitude all through grade school and high school is, if you’re not practicing 100 percent you’re not doing anything for your team.

So quietly, when no one is looking, Tori Schickel is working hard to improve herself and her team. She wants to win and has does just that, leading her Evansville Mater Dei High School team to the state finals in three of her four seasons there.

However the ‘silent assassin’ isn’t so quiet when the lights turn on. Though the season is young, she has continued to put up big numbers, recording four double-doubles in just seven games. But it’s those other times, the times when no one is around, that make Schickel a special player for Butler.

“I think bigger things are to come just because of her work ethic,” Godlevske says. “I think she’s nowhere near as good as she’s going to be.”