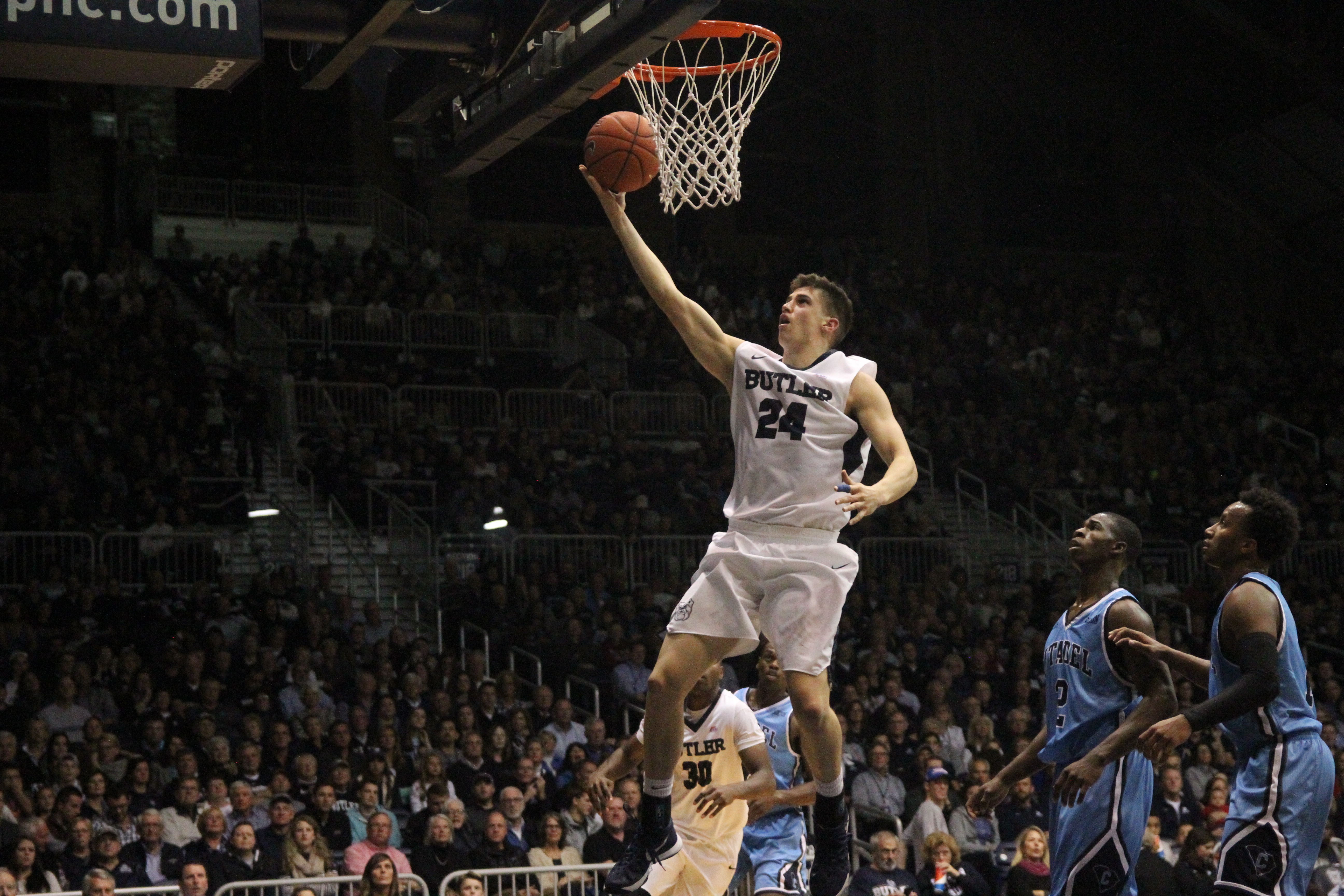 Seasons are not defined by games in early December. It’s a truth every college basketball coach in the country would attest to. However, that doesn’t mean it’s too early for teams to make a statement.

Butler certainly did that much on Wednesday, as fifth-year senior Roosevelt Jones banked in a well-contested layup with a tenth of a second remaining to defeat No. 17 Cincinnati 78-76 on the road.

The game started with the Bulldogs quickly jumping out to an 11-3 lead, thanks to two three-pointers by Kellen Dunham and five early points from Tyler Wideman.

It wouldn’t be that easy. The Bulldogs knew that going in, and an early eight-point lead was not going to change things.

Cincinnati clamped down on defense, holding Dunham to just two points over the final 16 minutes of the half. The Bearcats got going offensively too, hitting five threes in a seven minute span. That propelled them ahead, and they held a 33-28 lead at the break.

Graduate transfer Jordan Gathers (5) had 7 points on Wednesday, the most he’s scored in a Butler uniform. (Photo by Nora Navin)

It was a tough, physical half of basketball – something that would seem to play in Cincinnati’s favor. They came in ranked second in the country defensively, allowing just 54.6 points per game. But, Butler has been known in the past to have gritty teams, and head coach Chris Holtmann preached that mentality to his guys.

Butler came out in the second half and tied it early at 35. The Bearcats answered with an 18-9 run, and the 11,125 fans on hand at Fifth Third Arena were roaring. There were 12 and a half minutes remaining, and the Bulldogs were struggling to get stops on defense.

That’s when things began to swing back Butler’s way. After a layup from Jordan Gathers and a defensive stop, the Bulldogs got the ball to Tyler Wideman in the post. A foul was called as he went up for a shot, giving him two free throws following a media timeout.

However, Cincinnati Head Coach Mick Cronin jumped off of the bench and picked up a technical foul, arguing that Wideman traveled before the foul was called. Kellen Dunham knocked down both of the technical free throws, Wideman hit one of his two foul shots, and the Bulldogs were suddenly back within four.

The Bearcats held on to the lead until the 4:47 mark, when Dunham hit the second of two threes on consecutive possessions that gave Butler a one-point advantage. The teams battled the rest of the way and with the Bulldogs up one, Troy Caupain had his shot blocked by Wideman. Kellen Dunham came away with the rebound, and Cincinnati was forced to foul with 17 seconds left.

Dunham knocked down both free throws, and Cronin called timeout with his team down three. On the ensuing possession, Jacob Evans missed a three-pointer but Octavius Ellis tipped-in the rebound as he was fouled. Ellis made the free throw to tie the game with just over four seconds remaining.

Holtmann did have a timeout remaining, but said he felt his team was prepared enough for the situation and chose not to use it.

The team ran one of a few plays that they have for these end of game scenarios. Jones said the play is called ‘three across iso.’ Graduate transfer Austin Etherington took the ball out of bounds and threw a one-handed baseball pass to Jones, who battled for it against the defender at the opposite three-point line. Jones came up with it, drove around one Cincinnati player, and then bounced off of contact from Gary Clark as he tossed in the game-winner.

Wow! @ButlerMBB at the buzzer! The Bulldogs defeat ranked Cincinnati on the road. pic.twitter.com/RJDFnNbkhl

“That was a Butler win,” Holtmann said. “…To me that’s the highest compliment, because our guys played with real grit, through the horn.”

Holtmann gave credit to former head coach Brad Stevens, who he said was instrumental in setting up the final play during his tenure. He also praised Etherington, who had asked one of the assistant coaches to work with him on making long in-bounds passes hours earlier at shoot-around.

“He practiced it on his own, not knowing that his number would be called in that particular situation,” he said. “You had a senior, a fifth year guy, step up and do that.”

Dunham led the team with 24 points, his third straight game over the 20-point mark. He said that his team proved themselves by not letting the game get away, even when they were not shooting well.

“I think that it was a testament to some of my teammates to, you know, just hang around even though it was probably not one of our better shooting games, “ he said. “But to just keep fighting and trust in our defense and trusting that we’ll get some rebounds. I think that was huge.”

It was a big win, made bigger by the drama that unfolded in the final seconds. Even so, it won’t define the season for Butler. When February comes around and the Bulldogs are fighting each night in the Big East, this game will be a distant memory.

But if the ‘Dawgs were hoping to make a statement that they can play tough when they need to?