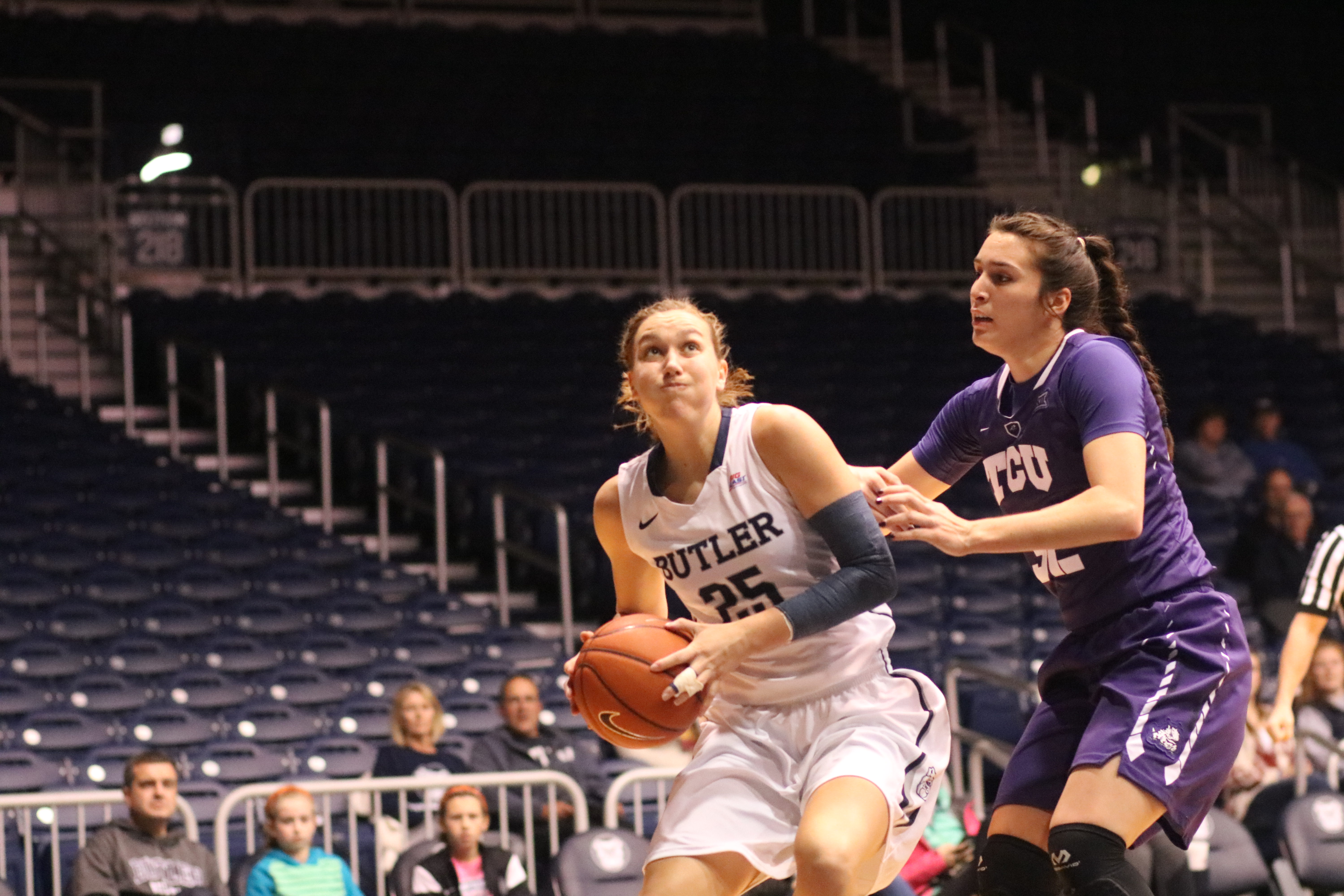 With a national TV audience watching and a talented Big 12 opponent in front of them, the Butler women’s basketball team had the opportunity to make a statement on Tuesday night.

The Bulldogs certainly took advantage, making the final run in a tug-of-war game to beat the TCU Horned Frogs 65-53 at Hinkle Fieldhouse.

Butler (4-2) played well defensively in the first quarter, holding TCU (5-2) to just 23 percent shooting from the floor. However, the Bulldogs allowed seven offensive rebounds leading to eight second-chance points, and the game was tied at 12 after the opening period.

The Horned Frogs came out of the huddle firing on all cylinders to start the second quarter, going on a 14-4 run that gave them a ten-point advantage. Then, suddenly, the momentum completely shifted.

The Bulldogs held TCU scoreless for almost six minutes, going on an 11-0 run that gave them a one-point lead. The Frogs finally ended the drought with a three-pointer, followed by Blaire Langlois hitting a jumper with five seconds remaining for the home team. That ended the roller coaster quarter, and the teams were tied at 29 headed into the locker room.

Butler Head Coach Kurt Godlevske said that while his team had a few difficult stretches in the first half, they have made strides in each game this season.

“I think you focus on the little things,” he said. “For us that’s so important. When we do the little things right we’re really good. So when they make big runs on us, it’s because we’re having breakdowns, mental mistakes. We’re just trying to correct those. And the kids, to their credit, they’re becoming fewer and fewer every game and that’s kind of our growth process.”

Butler sophomore Sydney Buck (12) had 10 points, including two three-pointers in her team’s 65-53 win over TCU on Tuesday. (Photo by Jimmy Lafakis)

Neither side could create much separation in the third quarter, as each team had a scoring drought that lasted more than three minutes. Butler was able to take a slim 45-43 advantage into the final quarter of play.

It was another run to start the fourth quarter, this time 11-0 by the Bulldogs. And this time, Butler wouldn’t allow the Horned Frogs to respond.

Godlevske said that while he was happy to get the win, the way his team played was the biggest takeaway of the night.

“(I am) more excited about just how we played and how we dug our heels in,” he said. “How we defended, how we rebounded, and how we really executed. We made a nice adjustment in the second half, and for the kids to be able to come and do that, I thought was huge for us.”

Fifth-year senior Belle Obert recorded a triple-double with 12 points, 11 rebounds and 10 blocks. She became the 20th player in Big East history to accomplish the feat, and just the second to do so with points, rebounds and blocks.

Obert said that she didn’t know that she was near a triple-double until after the game, when one of the assistant coaches told her that she came up one block short before realizing that the milestone had been reached.

The Butler center deflected attention from her stat line, saying the victory was a building block for the youthful group.

“We’re such a young team, and really a program that’s growing each and every year,” she said. “Getting wins like that, is just huge for our confidence and going forward knowing that, ‘hey, we can hang with the big dogs no matter what.’”

Freshman Tori Schickel led Butler with 21 points and 12 rebounds. Zahna Medley was the leading scorer for TCU with 13 points.

Butler’s next game comes on Friday, when they travel to Dayton to take on Wright State.