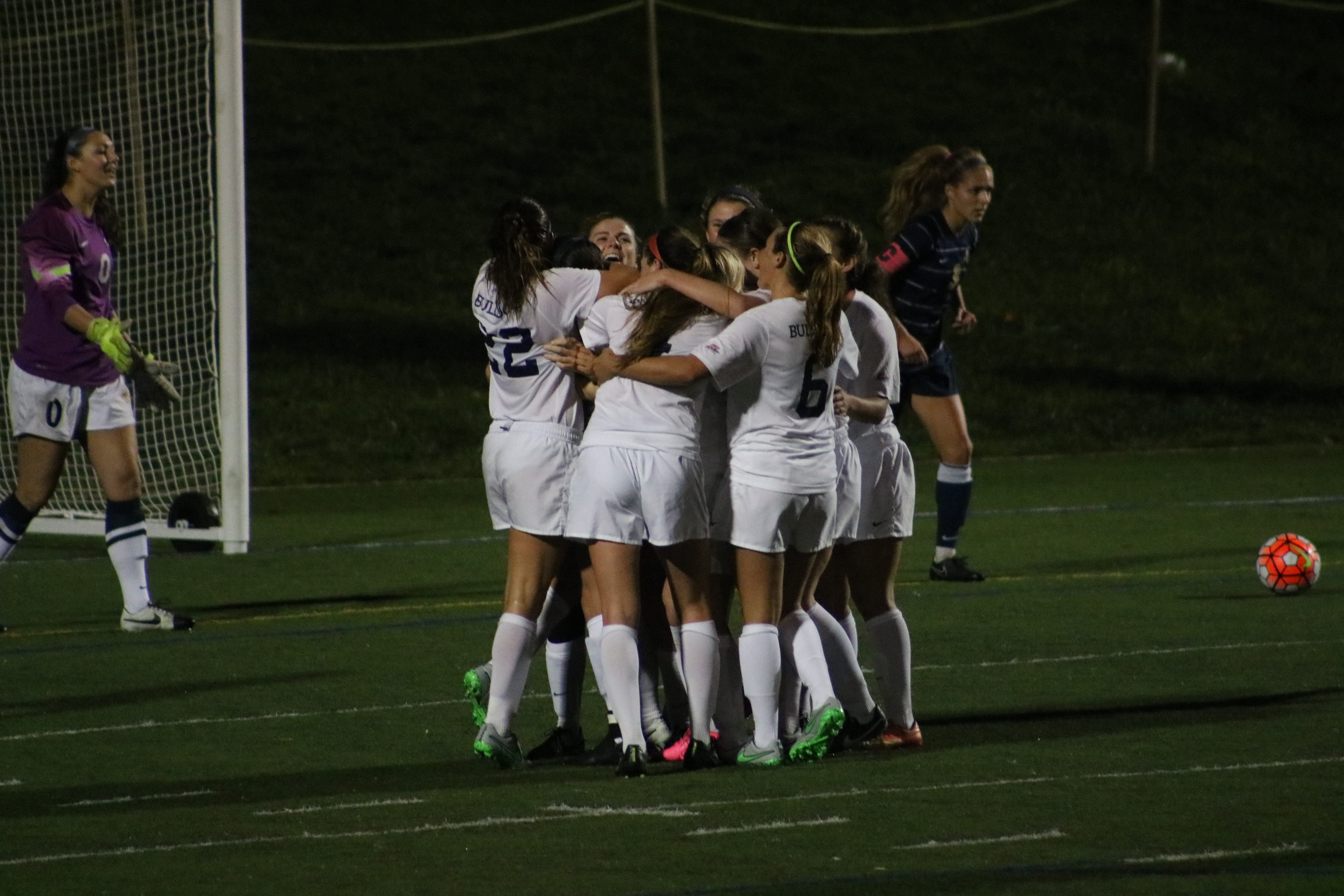 The Butler University women’s soccer team, ranked No. 4 in the Big East, notched their first ever win in the Big East Championship Tournament as they ended Marquette University’s season with a 1-0 victory that advances them to the semi-final round of the tournament.

Butler avenged a 1-0 home loss to Marquette with tonight’s win. Looking to repeat that feat against St. John’s (won 1-0 in Indy Oct. 1)

“The girls were fantastic,” said Co-Head Coach Rob Alman. “(They had] a warrior mentality, particularly in the last 10-15 minutes, just withstanding some pressure and some service into the box.”

In the first half, Butler outplayed Marquette very well, something they failed to do the last time the two met, which Alman said was the main reason they lost.

Butler controlled much of the first half. They played a lot of time on offense and played strong defensively when Marquette had the ball, which became less often as the clock counted down.

“I thought the first half performance was good,” Alman said “But we knew there was a little bit more in there for us in terms of shots and possessions through the midfield, in particular.”

Senior midfielder Sophia Maccagnone said when the two played nine days before, the team just didn’t seem like they wanted to win the game, and that was the biggest change this time around.

“We just wanted to not underestimate this team again,” she said. “We came out very tough and we wanted to make sure that they knew that we were a threat in the Big East. It’s tournament time. We came out and played like the second half last time for both halves.”

At halftime, Butler had three shots and three shots on goal, compared to just one shot and zero shots on goal by Marquette. The Bulldogs acquired four corner kicks, and the Golden Eagles had zero. The score, however, remained tied at zero.

Butler’s sophomore goalkeeper Madison Card had zero saves, and Marquette’s senior goalkeeper Amanda Engel had three. Also, Butler tallied up eight fouls and Marquette put 11 up on the board.

As the second half started, the Bulldogs still had much, if not more, control over the game. The Golden Eagles came out a little bit stronger and spent more time on offense. They also played a more aggressive second half.

“At the start of the second half, I thought we were great,” Alman said. “It was the most dominant period in the game.”

In minute 63, everything changed for Butler. Sophomore defender Shannon McDevitt took advantage of Marquette’s fallen goalkeeper and kicked a loose ball into the goal to give Butler a 1-0 lead.

“The goalie was right there,” McDevitt said of her shot, “but I knew that I needed to get another touch by her, and I just kind of barrelled through someone to get to the ball and get it in the back of the net.”

Neither team was afraid to foul each other. Marquette ended the game with 20 fouls, 9 in the second half, while Butler had eight in each half to put them at 16 for the game.

“We knew it was going to be a battle,” McDevitt said. “I think we all knew that we had something to prove to them, so it was great to see the team come out and play like we can.”

Maccagnone, who played her final game in The Butler Bowl, lead the team against Marquette and was responsible for three of the team’s nine shots and for two of their six shots on goal.

The game also achieved many records for the team. The win put them at 14-6-1 on the season. The 14 win season is the second most in program history, second only to the 2002 team that recorded 15 wins.

Also, the senior class has now become the winningest class in Butler women’s soccer history. The class not only owns the most successful record, but they have the best winning percentage, too.

And on top of that, the win against Marquette was their eighth shutout of the season, tying a single-season record at Butler. Card was in the goal for all but one of those shutouts.
The Bulldogs will return to action against St. John’s University in the semi-final round of the Big East Championship Tournament. They will play on Friday, Nov. 6 in Omaha, Nebraska.