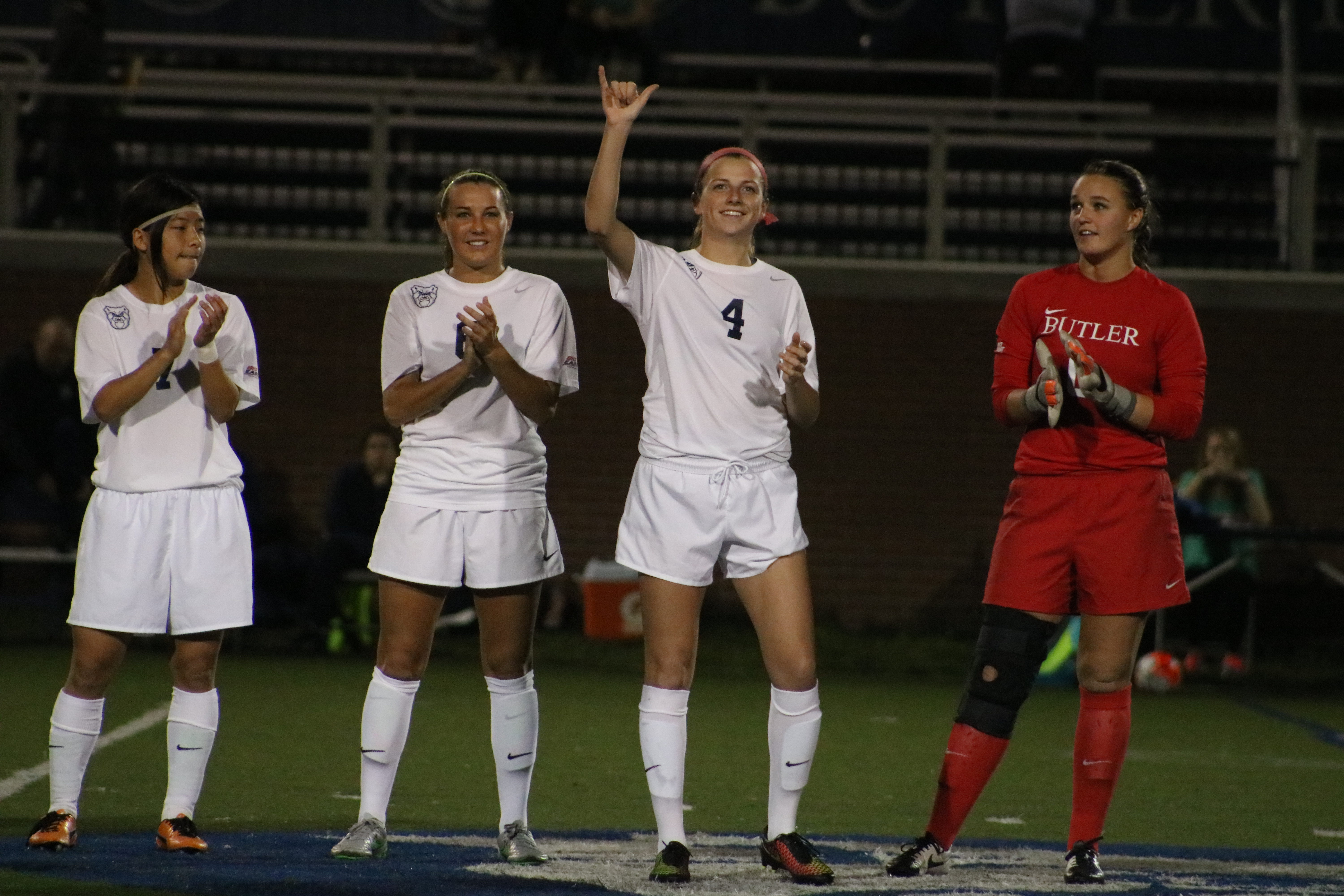 Butler University women’s soccer team, the No. 4 seed in the Big East tournament, upset No. 1 seed St. John’s University Friday in the semi-final round of the Big East Championship Tournament in Omaha, Nebraska. The Bulldogs will play in their first ever Big East championship game on Sunday, Nov. 8 against Providence. The game will be televised live on Fox Sports 1 at 1:30 ET.

“There is something different and special about a championship game,” Co-Head Coach Tari St. John said. “And while it’s special, it can also create distractions. We need to focus on doing what we do and prepare for Sunday. We’ll enjoy this and the girls deserve it. When we wake up tomorrow, it’s back to business.”

What a game! Thank you fans for the support!! We will see you on Sunday in the FINALS!!! #GoDawgs pic.twitter.com/tvb0N84MYW

The game was kicked into high gear early for the Bulldogs, and in minute 9, junior midfielder Serina Kashimoto scored a goal off a 25 yard penalty kick.

Butler played well the entire first half and held St. John’s scoreless at halftime. A major reason Butler was able to hold the Red Storm scoreless was due to sophomore goalkeeper Madison Card. St. John’s put up 12 shots in the first half, and Card had five saves.

The second half was much like the first. Butler played very strong, as did St. John’s, but St. John’s struggled to connect with the net, especially with Card protecting it.

In minute 57, freshman forward Paige Monaghan scored a big goal from 25 yards out to give the Bulldogs a 2-0 lead. Monaghan was assisted by senior midfielder Sophia Maccagnone.

And we have a second goal for the @ButlerWSoccer Bulldogs in Omaha. Check it out. https://t.co/dkRDZjIi8H

In minute 62, the Red Storm fired back at the Bulldogs by scoring a rebounded shot from six yards out by redshirt senior defender Georgia Kearny-Perry, putting the score at 2-1. She was assisted on the play by freshman forward Lucy Whipp.

The Bulldogs were not phased by the lone St. John’s goal and held on the rest of the game for a huge victory. The victory puts them at 15-6-1 on the season, tying them for the winningest season in Butler women’s soccer history.

“What a game,” St. John said. “Credit to St. John’s; they played outstanding today. They kept the pressure on us for 90 minutes. I’m extremely proud of our bend-but-don’t-break mentality today. Maddie Card relishes those pressure moments.”

After three shots in the first half, Butler added just two more to put them at five for the game, while St. John’s added 14 more to give them 26 on the game. Butler had two shots on goal and St. John’s had 12.

St. John’s junior goalkeeper Diana Poulin had no saves, and Butler’s Card had 11 on the game after adding six more in the second half.

Kashimoto and Monaghan were the team leaders for Butler. Each player had one shot, one shot on goal and one goal.
St. John’s star senior forward Rachel Daly, who played her last collegiate game, accumulated nearly half of the Red Storm’s shots with 11. She also had three shots on goal.