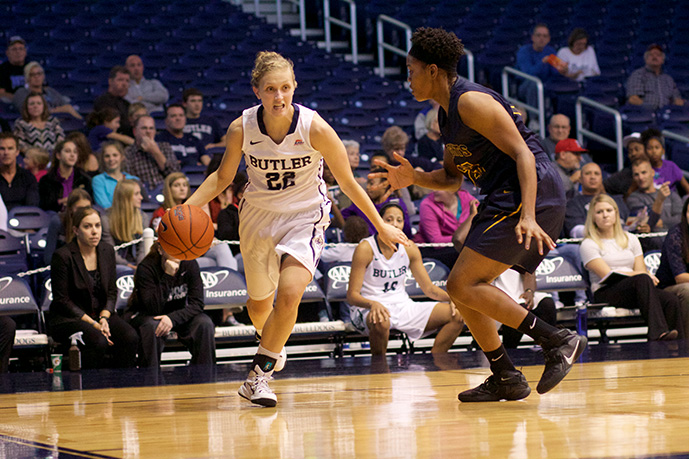 The Butler Women’s Basketball will focus heavily on leadership this season, as they prepare to open the regular season at Hinkle Fieldhouse on Nov. 13 against Valparaiso.

Head Coach Kurt Godlevske is in his second season with Butler. Last season, he led the Bulldogs to a 14-16 overall record, including a 10-8 record in the Big East Conference.

“We’re a lot deeper than what we were last year,” Godlevske said. “I expect a higher level of execution from our ladies. Anytime you get more and more repetition and more used to what you’re trying to run, you expect that efficiency level to go up.”

The return of seniors Blaire Langlois and Belle Obert and their leadership will be a key to the Bulldogs success in the upcoming season. The Bulldog roster is on the younger side this season, as they welcome five freshmen.

“Our seniors have the experience and knowledge of what it takes to be successful,” Godlevske said. “If our seniors do what they’re supposed to do and guide the freshmen in the direction we need to go, we think we can have a lot of success because they really do complement each other on the floor with their skill sets.”

Ward is the Preseason Big East Freshman of the Year and the highest ranked recruit entering the Big East. She said she believes the team is committed to doing what it takes to win.

As for the leadership role of the seniors, Langlois said believes it is their job to help guide the freshmen as they adjust to Butler.

“We’re a really young group so I think it’s important for us to set a good example and be there for the freshmen on and off the court, whether its for school, practice or getting accommodated to college,” Langlois said.

Langlois and sophomore Sydney Buck were the only players to start in all 30 games last season. Langlois was named Preseason All-Big East Team this year and top returning scorer (11.2) and assist-provider (69). Buck brings back sharp outside shooting, as she made over 60 three-pointers last season.

Obert joined the team last year after playing volleyball for Butler for four years. She came four games into the season and ended up being a starter for 24 of her 26 games played. She led the  Big East Conference in shots blocked and finished 24th in the country for blocked shots per game.

“As a team, because we’re so young, I think it’s a matter of using all our talent and figuring out how to put it all together,” Obert said. We have a lot of talent but because we’re young we haven’t gotten a chance to play a whole lot together.”

The Bulldogs also return redshirt freshman Nicole Orr and sophomore Emmy Schabel. An injury kept Orr out of most of last season. Schabel walked on for the Bulldogs last year and started in three games.

The season will begin with a tough non-conference schedule, including four teams that reached the NCAA tournament last season. Two of those games are on the road,  Chattanooga on Nov. 15 and South Florida on Nov. 25.  The other two are Green Bay and Arkansas at home in December.

At the start of December, Butler will play three straight games against teams that made the WNIT last season. That stretch starts at home against TCU, and continues when the team goes on the road to play Wright State and Ball State.

The Bullgdogs will play five of their first seven games of the conference season at Hinkle Fieldhouse and will host three nationally televised games this season, two of which come against conference foes.

The Big East home opener will be at home against Villanova on Tuesday, Dec. 29, and two days later, Butler will host Georgetown at Hinkle Fieldhouse.