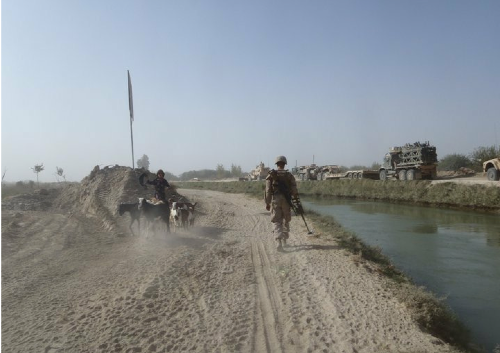 Cooper Dinges, 25, said he lives under the motto “the few, the proud.” After high school, he spent four years in the Marines as an amphibious assault vehicle crewman. He continues to be one of “the few” as a veteran at Butler University. Dinges is president and founder of BU Military Veterans, an organization that connects Butler veterans and organizes service projects.

Very few Butler students have gone through what Dinges has. There are nine veterans at Butler who are certified for some type of Veteran’s Affairs benefits.

Dinges said he created BU Military Veterans to help incoming veterans cope with the same problems he had coming to Butler three years ago. Now in his senior year, Dinges has come to terms with initial struggles.

“I didn’t know any vets at Butler,” Dinges said. “I was close to leaving because I didn’t feel like I could really relate to anyone.”

Not being in a classroom for more than four years, Dinges needed a refresher on how to be a student again.

“Having not written anything in a long time, FYS was a big help,” Dinges said. “And you kind of have to figure that out. Everyone comes to Butler and needs to figure out how to be a college student, but I feel like for vets it’s a little more challenging.”

The Marines provide a program for those about to leave military life. However, Dinges said it was not that beneficial.

“They teach you kind of how to be normal again,” he said. “You do mock interviews and they tell you how to use your benefits for college. People don’t take it very seriously, I don’t think it’s that effective.”

Dinges said the disciplinary nature of the military helped him in the classroom.

“I always went to class, I always did the work on time, I paid attention,” he said. “Other students do that too, but coming out of the military, you think that that’s what you should do and what you have to do so that helps.”

Dinges still has military tendencies. He sits up straight, stands up straight and walks like he has somewhere to be. In class, he sits front and center and stares at the teacher.

“My girlfriend asked me why I do that. That’s just how I show I’m paying attention,” he said. “I had trouble just relaxing after I got out and just enjoying myself in just regular social situations, but I think college has helped a lot with that.”

Another challenge Dinges and many veterans face is connecting with their civilian peers.

“Being in a class, you’re probably going to be older than everyone,” Dinges said. “So it’s been tough to relate to people and it’s been hard to warm up to that. I’ve gotten better at it. Now I have a lot of friends who are in my major, who are students that I met over time. It helps to accept being a student instead of being a veteran and being different.”

Dinges said once he accepted the student identity, it helped a lot.

“I always encourage that to some of our newer vets because as long as you keep separating yourself, you’re not going to be successful here,” he said. “I feel like I’m better than I’ve ever been since I got out, and I think it’ll only get better, I hope.”

Justin Wilson, 24-year-old first-year finance major, is vice president of BU Military Veterans. Wilson also served in the Marines as a combat engineer. After sweeping for mines and improvised explosive devices in Afghanistan for nine months, Wilson is struggling to fully adjust into civilian life and connect with peers.

Both Wilson and Dinges are at least four years older than most of their classmates.

“I don’t want to hate on non-veterans or anything like that,” Dinges said. “But it took some time to get used to people complaining about things, but stress is all relative and I’ve learned that. It’s OK to be stressed about school work, and I’ve figured out after a while that it is stressful, too. But in the beginning, I was like people are complaining about stuff that doesn’t even matter. And I’ve gotten a lot better about it.”

Commuting an hour to class everyday from Belleville makes creating connections that much more difficult for Wilson. In the Marines, Wilson was constantly with the same guys in his unit.

Wilson became accustomed to spending everyday with the same people while in the Marines.

“Not having anything like that, you get kind of lost,” Wilson said.

Wilson is often frustrated by peers but said he was the same way when he was 18 or 19 years old.

“They just kind of dismiss someone who is not the same age and not doing the same things like going out or whatever they do,” he said.

He said he feels like they dismiss his experiences.

Slamming doors and loud noises take him back to his time in Afghanistan.

“I’ve talked to VA counselors about it, and they kind of explained it the best way,” Wilson said. “They call the flight or fight response part of the brain a name, like Sally or something like that. Well, Sally is never going to make your decisions unless you get put in those types of situations, and your frontal lobe for the most part will make the rest.

“So when you’re exposed to something like an improvised explosive device going off – for instance, my best friend’s vehicle got blown up right in front of me – so when I experience a loud noise or something, Sally likes to take over the frontal lobe,” he said. “Even though I know where I’m at, you’ll still get that feeling for that split second until your adrenaline comes down.”

Wilson is working on a veteran committee at Butler to improve the lives for future veterans that attend Butler.

“We’ve been having a lot of issues,” Wilson said. “It’s not just me, because when someone gets out, even if you didn’t deploy or anything, it’s still very hard to transition from military life to civilian life.”

Even before the Marines, Dinges knew he wanted to attend Butler. The GI Bill helped him get here. The bill provides a range of benefits for veterans, including funding for tuition and living expenses. However, since Butler is a private institution, the bill only covers about half of the tuition costs. The Yellow Ribbon Fund is a provision to the GI Bill that helps veterans attend private universities without paying out of pocket.

Private universities enter a voluntary agreement waiving a certain amount of tuition as the Yellow Ribbon Fund and the VA matches that amount.

Butler agreed to provide $7,500 for up to 24 students per year. The VA then matches that, bringing the out-of-pocket expense for Butler veterans who qualify to just under $1,000.  When Dinges was a first-year student, Butler only gave the Yellow Ribbon Fund to 12 students.

“We basically kept bugging them and bugging them about it and eventually they increased it to 24,” Dinges said. “So at this point, any veteran here has it all paid for.”

Dinges said a lot has changed at Butler since he first enrolled.

“They’re trying to bring more veterans here, and I think that’s because they want to make Butler more diverse. Having more vets can be a part of that,” he said.

He said Butler President James Danko wanted to meet with the veterans and talk about potential improvements.

“I think overall, Butler’s doing a really good job,” he said. “There aren’t many colleges where you can get this much attention because there are so few of us. So we want more veterans, but at the same time, we’re kind of lucky to be some of the only vets and we get a lot of attention.”

“We want to see how we can use our strengths,” Wilson said. “We are an asset, we’re trying to implement our strengths and also fix the struggles we’re having transitioning.”

Every December, BU Military Veterans organizes a care package drive for deployed troops. They set up in Starbucks and collect supplies or money to buy supplies, package them and then send them out to the troops.

BU Military Veterans have veterans representing the Navy, Army, Marines and National Guard. Their next meeting is Nov. 3 at 7 p.m. in the Pharmacy and Health Sciences Building room 15.