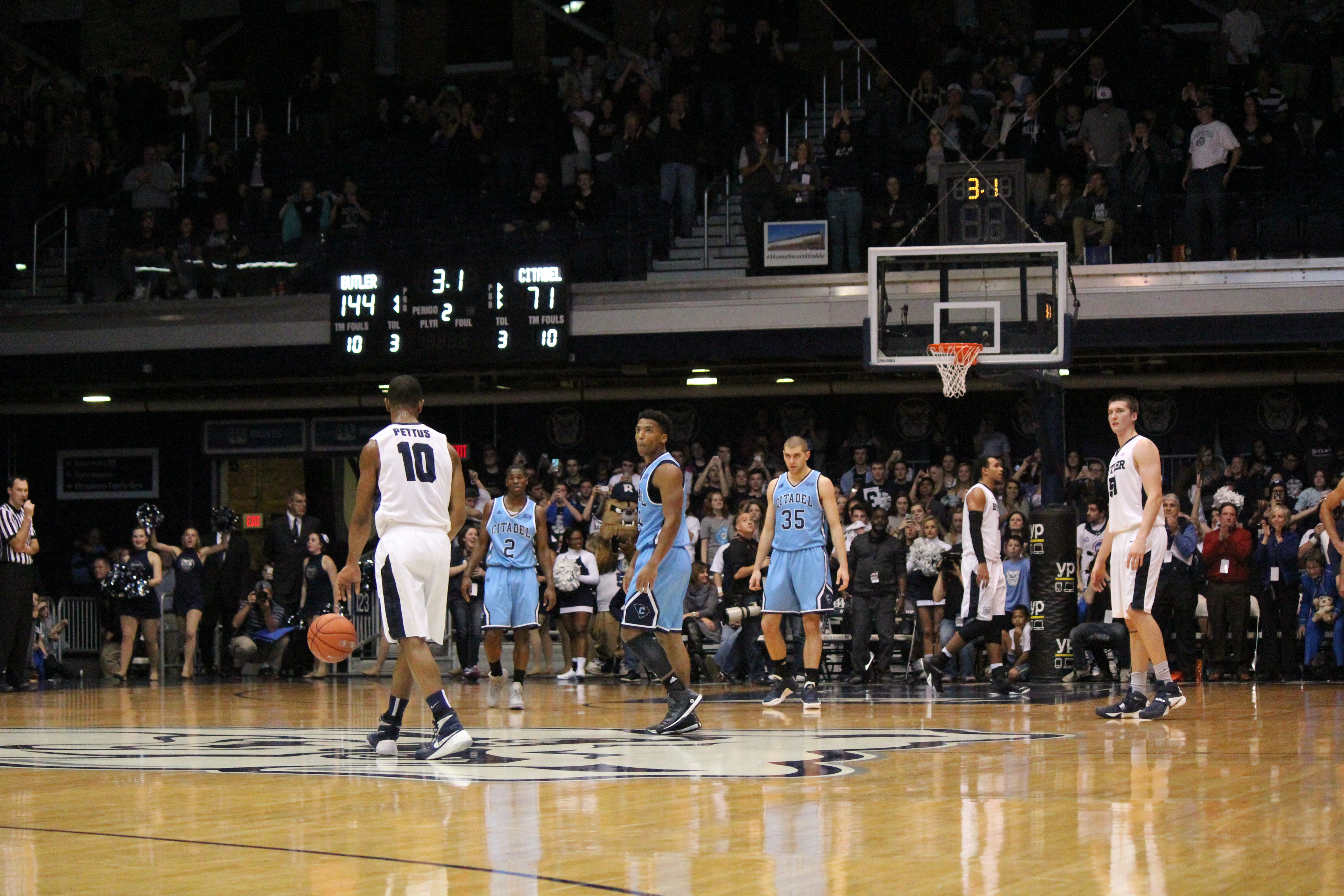 Take the Butler basketball record book and throw it away. After the team’s 144-71 season opening win over The Citadel on Saturday night, a new edition will be needed.

Butler broke nearly half-a-dozen team records, while putting on an offensive clinic for the announced crowd of 8,440 at Hinkle Fieldhouse.

The home team never trailed, taking a 7-0 lead to start the game. However, The Citadel (also nicknamed the Bulldogs) kept it close early, staying within single-digits for the first ten minutes.

In his debut as head coach at The Citdel, Duggar Baucom’s high-paced, three-point heavy offense was in full display, and his team knocked in a few early to keep themselves within striking distance. The Citadel’s Connor Schroeder banked-in a three from the corner with 8:52 left in the half, making the score 36-27. From there, Butler took full control.

The home team finished the half on a 35-14 run, giving them a 30-point lead at the break that would never get challenged.

“They won’t all be like that,” he said with a smile.

Kellen Dunham led the way with 24 points, 22 of which came in the first half. He played just four minutes after halftime. Andrew Chrabascz had an impressive stat line with 12 points, 8 rebounds, and a career-high 8 assists.

Three Butler players also set new career-highs in scoring; Jackson Davis had 19 points, Tyler Wideman had 18 and Tyler Lewis had 17 points in his Butler debut, eclipsing his previous career-high of 16 that he set while playing at North Carolina State.

Kelan Martin had his first career double-double with 13 points and 10 rebounds before fouling out, while Roosevelt Jones had the eighth of his career thanks to an 18-point, 11-rebound performance. Jones said the style of the game was extremely unique.

“I’ve never played in anything like this,” he said. “Probably just playing in open gym, getting layups.”

Dunham agreed, saying that he also had never played in a game like the one on Saturday at Hinkle.

“Not even close,” he said. “I would say the closest thing would maybe be like an AAU game when you’re up a great amount and it starts to get a little sloppy.”

The first school record to fall was for most points in a half, when Dunham led the team to 71 points before halftime to break the previous mark of 63. However, that record would hold for less than two hours, as Butler would go for 73 points in the second half to set the new mark.

With 144 points, Butler shattered the school records for both points scored in regulation (previously 115) and points in any game (previously 128 in a double overtime loss to Evansville).

The 73-point margin of victory broke a record that has stood since the 1921-22 season, when Butler defeated Indiana Law School by 68 points. Finally, the team broke a long-standing record for most field goals made in a game with 56, surpassing the 53 made against DePauw in 1965.

Holtmann said that while he was impressed by the way his team played, they know that things will be much tougher moving forward.

“I think our guys played with good purpose,” he said. “I think they understand that this game was unique. And that we have a long way to go and a lot to improve on.”

Butler now looks ahead to Missouri State, a team that they will take on in San Juan, Puerto Rico on Thursday in the first round of the Puerto Rico Tip Off.