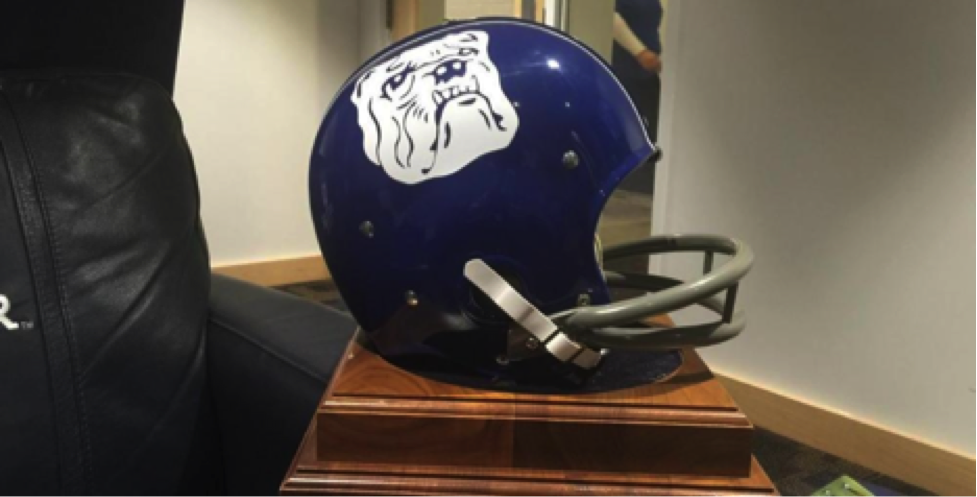 The Butler football team defeated Valparaiso 42-21 at the Butler Bowl on Saturday. The win returns the Hoosier Helmet Trophy to the Bulldogs. Butler improves to 5-4 overall and 3-3 in the Pioneer Football League. Valparaiso drops to 1-7 overall (1-5 PFL).

Senior quarterback Matt Shiltz had a total of four touchdowns on the day, two passing and two rushing along with 187 passing yards to seal the Butler victory. Marquese Martin-Hayes had a team-high five catches for 58 yards. The Butler defense held Valparaiso to only 63 rushing yards on the day.

A 12-yard rushing touchdown by Shiltz began the scoring midway through he first quarter. Pace Temple also caught a 13-yard pass that gave Butler the 14-0 advantage. Valparaiso scored a touchdown as the first quarter drew to a close. The two teams each chipped in a touchdown during the second quarter to make the score 21-14 at the half.

Valparaiso would not score again in the game as the second half was dominated by Butler on both the offensive and defensive sides. On Butler’s first drive of the second half, Shiltz threw a 5-yard touchdown pass to Zack Wolfe to give Butler the 28-14 lead. The final two scores of the game would come from interceptions returned for touchdowns by Isaak Newhouse and Jordan Massey.

And Jordan Massey picks off the pass and runs it into the endzone for another Butler pick-6. #GoDawgs

“All day long our special teams and defense put us in great positions,” head coach Jeff Voris said to ButlerSports.com. “All season for us has come down to getting seven versus three, and we took advantage of the short field.”

The Bulldogs return to action on Nov. 14 at the Butler Bowl against Drake for a Senior Day matchup. Kick-off will be at 1 p.m.