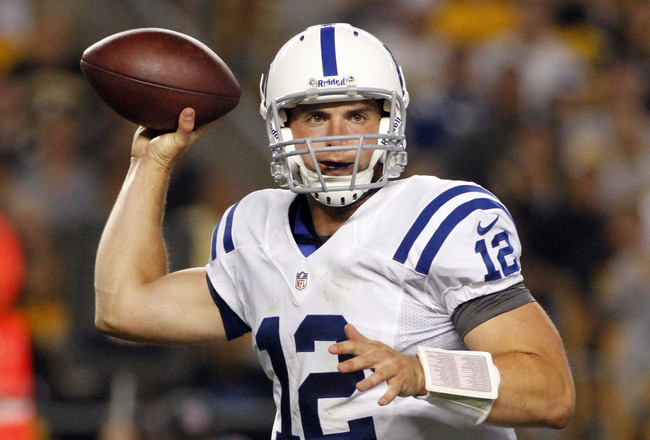 A sloppy last minute overtime loss to the Carolina Panthers on Monday Night Football pretty much summed up the Indianapolis Colts season thus far. A large deficit, followed by a rally that came up just short.

The team entered the season with lofty expectations after an AFC Championship Game appearance last year. However, they have posted just a 3-5 record to this point, leading to the firing of offensive coordinator Pep Hamilton this week.

While there are many reasons for the rocky start, star quarterback Andrew Luck’s sub-par performance stands out. Turnovers have been the team’s biggest problem, and their franchise player has led the way. Through eight games, Luck has thrown nearly as many interceptions (12) as touchdowns (13).

The former No. 1 pick has suffered some injuries, which could be the cause of at least some of his struggles. He missed two games last month with a reported shoulder injury.

However, the problem goes deeper than this injury. Fox NFL Insider Jay Glazer has reported that Andrew Luck had been playing with broken ribs. The injury was never reported by the Colts organization, and failing to report a major injury (such as broken ribs) is a violation of NFL rules. This rule is enforced to prevent any team from having a competitive advantage by keeping an injury a secret.

If the Colts are found to have violated this rule, they wouldn’t be the first team to do so. Similar situations have occurred in the past with other teams, and they are usually fined a large amount, with a forfeited draft pick being the most extreme punishment.

Last season, the Dallas Cowboys never announced a rib injury that had occurred to quarterback Tony Romo. After the league looked into the situation, they concluded that none of Romo’s ribs were actually fractured, so it wasn’t deemed a serious injury and the team was not disciplined.

In order for the Colts to get off free, they will have to prove that Luck’s injury, which reportedly included multiple ribs being broken, was not major. Their best option is to convince league officials that Luck missed the two games because of his shoulder injury, and that the rib injury didn’t play a role.  They also could try to convince the NFL that they never knew about the injury because Luck didn’t tell anyone. This process will unfold over the next few weeks.

In my opinion, the Colts will be and deserve to be fined a decent amount for this violation. In today’s NFL, injuries are a crucial part of the game. Team’s official injury reports allow the media to know about injuries. This news is then reported through a variety of different media outlets. This information is extremely valuable not only to opposing teams, but also off the field thanks to the rise of fantasy football.

It can be assumed that Luck would at least notify a trainer about pain in his ribs. After the team doctors determined that they were broken, the Colts, knowing the league rules, should have put his shoulder and fractured rib injury on their official report.

Ultimately, this comes off as hypocritical after the team questioned the New England Patriots about their integrity in Deflategate. If an NFL team is going to call out another for cheating, they better be sure not to break the rules themselves.

Despite this all, the Colts are still tied for first place in the AFC South Division and control their own destiny. Avoiding controversy and conflict with the league will certainly make things easier as the team continues to fight for a playoff berth.