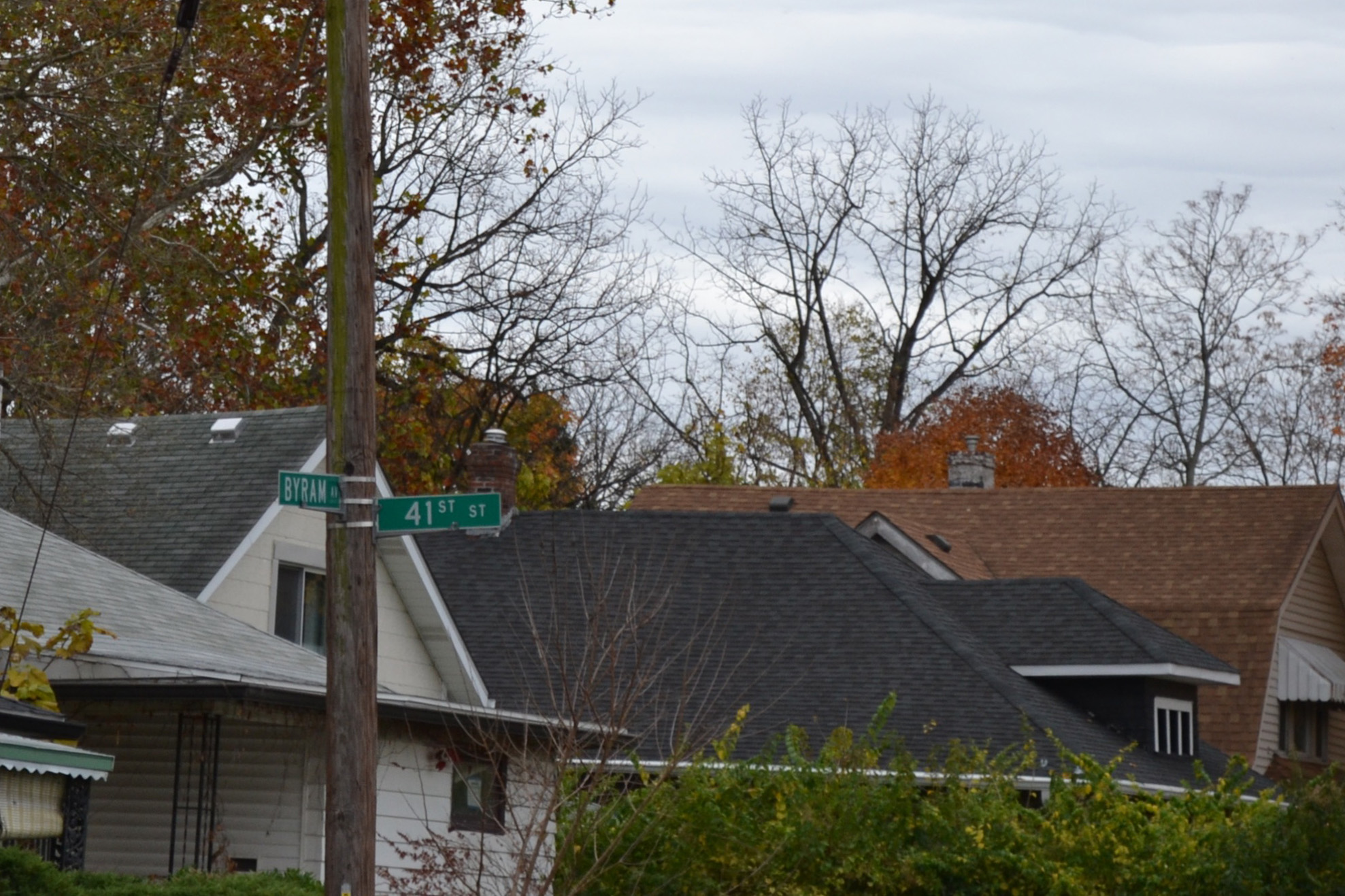 Vanessa Staublin, a senior strategic communications major, has night class most days. She walks to her home in the Butler-Tarkington neighborhood, Mace dangling on her keychain and using the flashlight app on her phone. Staublin felt safe when she first came to Butler University, but that feeling dissipated.

In less than two months, there have been four homicides in the Butler-Tarkington area, home to many Butler University seniors. All four cases are ongoing, with the youngest victim 10 years old. The most recent case was the shooting of 19-year-old Malik Perry on Oct. 13 on the 4100 block of Byram Avenue, just blocks away from Butler students who have houses in the Butler-Tarkington area.

Staublin did not know about the Oct. 13 homicide until she saw a Facebook post the next morning. The event took place about a half mile from her house, roughly the distance between Schwitzer Hall and Hinkle Fieldhouse.

“I was like, ‘What?’ I didn’t get a Dawg Alert or anything like that, so I clicked on it,” she said. “It was this whole story about how someone got shot. I kept reading, and it said something about like eight gunshots, and that really freaked me out.”

“Throughout the day, more and more people were posting about it and I still hadn’t heard anything from BUPD which I thought was really alarming,” she said.

Where are the Dawg Alerts?

“It has nothing to do with how close it has to be to campus, although that is one factor you look at,” Conley said.  “The Dawg Alert is sent out if the incident is active, ongoing and poses a potential threat to the campus itself. It could be one block south of campus, or it could be on the entire east side of Indianapolis at county line.”

Anne Leighty, a senior pharmacy major and Butler-Tarkington resident, said she learned about the recent homicides and crimes through social media as opposed to Dawg Alert.

“I think they have done a pretty poor job because a lot of times when information goes out, it doesn’t really clarify really much of what’s going on,” Leighty said.

Despite homicides happening within walking distance from her house, she said there have been instances where she has not received anything from Dawg Alert. She said she and other college students depend on the alerts for information such as crimes, because many students do not watch the news or even have TVs. She found out about the last shooting via Facebook, like Staublin.

Holly Aviles, a senior biology major, also lives in the Butler-Tarkington area. Similarly, her main source for information has been the Indianapolis Star. She said she has not heard anything from Butler.

“The seniors don’t stop right on that 45th Street,” Aviles said. “We live several blocks back, and I think that’s the scariest part is that the majority of seniors are living off campus and in those houses. We aren’t being made aware from our university that the dangers of what’s happening right in our alleys or right next door to us.

Staublin said she would have considered a Dawg Alert about the recent homicide the most important one students had ever received.

“It still kind of freaks me out. I don’t know what else BUPD or Dawg Alert (isn’t) telling me (or) if there have been other cases that have gone untouched,” she said. “So it makes me wonder what other precautions I should take.”

Staublin said she is considering signing up for alerts from other media.

“To have my parents that live a half an hour away telling me what’s going on in my backyard is a little upsetting, as well,” Leighty said.

Is Butler-Tarkington a safe place for Butler students?

“Some Butler students can feel very unsafe, but then I have also talked to a lot of other Butler students that understand,” Conley said. “They know what causes some of that to happen, and they don’t feel unsafe because they’re not wandering through that area. They’re not engaged in that sort of activity, so it’s not a factor for them.”

However, Conley said it is a matter of Butler students feeling comfortable, not how safe the neighborhood actually is.

“Whether or not you actually are unsafe is irrelevant,” he said. “It’s what a person feels and believes inside that’s important.”

Travis Freytag, a first-year actuarial-science major, said he has never felt unsafe at Butler, but he has not been far off-campus unless in a car.

“I’ve seen that there have been some shootings and some homicides,” he said. “I know it’s a pretty rough area, but that’s about all I know.”

Staublin said there is a stark contrast in the atmosphere of several neighborhoods in close proximity to Butler.

She said she thinks Butler-Tarkington is an OK place for students to be because she is surrounded by other Butler students, but she said she might change her mind if danger persists.

“It’s convenient to live that close but if it keeps getting worse, I would maybe suggest to future students looking elsewhere,” Staublin said.  “Maybe closer to the Hinkle area for houses.”

Conley gave some tips for students to stay safe.

“Be aware of their surroundings no matter where they’re at in the city itself (or) on campus,” he said. “It just comes back to common-sense thinking, especially when you’re out hours at night. It’s always good to be with somebody, let somebody know when you’re leaving and where you’re going, stay in contact with your friends, try to remain in lighted areas if at all possible.”

Michael Maxwell is the community resource liaison officer for the Indianapolis Metropolitan Police Department. He said if a student is driving and walking to his or her car, have keys ready, do not fumble for them. Additionally, he said students should keep their cell phones in their pockets until they are in their cars.

Staublin said she feels fine walking to classes during the day, but many of her strategic communications classes are at night.

“A lot of times I have to be walking home at like 9:30 at night by myself in the alley ways behind campus that doesn’t have any street lights or anything like that,” Staublin said.

Aviles said she gets concerned when she walks back to her home from Butler’s main campus  at night. She always tries to walk where there is the most light and stay on the main sidewalks.

Conley said if there is a situation where students feel unsafe and they need an escort, BUPD would send a car to escort them.

“We can’t afford to become a taxi service and pick everyone up at home and take them wherever they want to go, but particular situations, if there’s a need,” Conley said.

Maxwell said the recent surge in homicides is due to gang violence, but he is unsure why a war has erupted.

There are two groups, one in the Butler-Tarkington area and one in the 67th and Michigan Road area.  He said it is a back-and-forth rivalry; when one group kills a member of another group, then the other group retaliates and kills one of their members. He said there may be a truce in the works, but that shootings are not just random acts. Rather, he said, they are planned.

He said students should be relatively safe walking to class but should still exercise safety measures.

IMPD has increased police presence significantly in the area through the use of overtime duty officers, bicycle officers and officers in everyday clothing.
What should Butler students do?

Maxwell said people often hear crimes but do not call 911.

“We have started conversations with SGA leadership and through student initiatives board, we hope to come up with some ideas,” he said. “I’m sure within that, we’re going to be asking students what areas on campus they feel less safe in, may have to ask the city where are hotspots within Indy.”

“Definitely be aware and realize that we aren’t just in our little Butler bubble,” Aviles said. “We are part of the entire Indianapolis community and it affects all of us. Even if it doesn’t affect us directly, it’s affecting our community, and it’s definitely something that needs to be improved upon. Our safety is really important.”