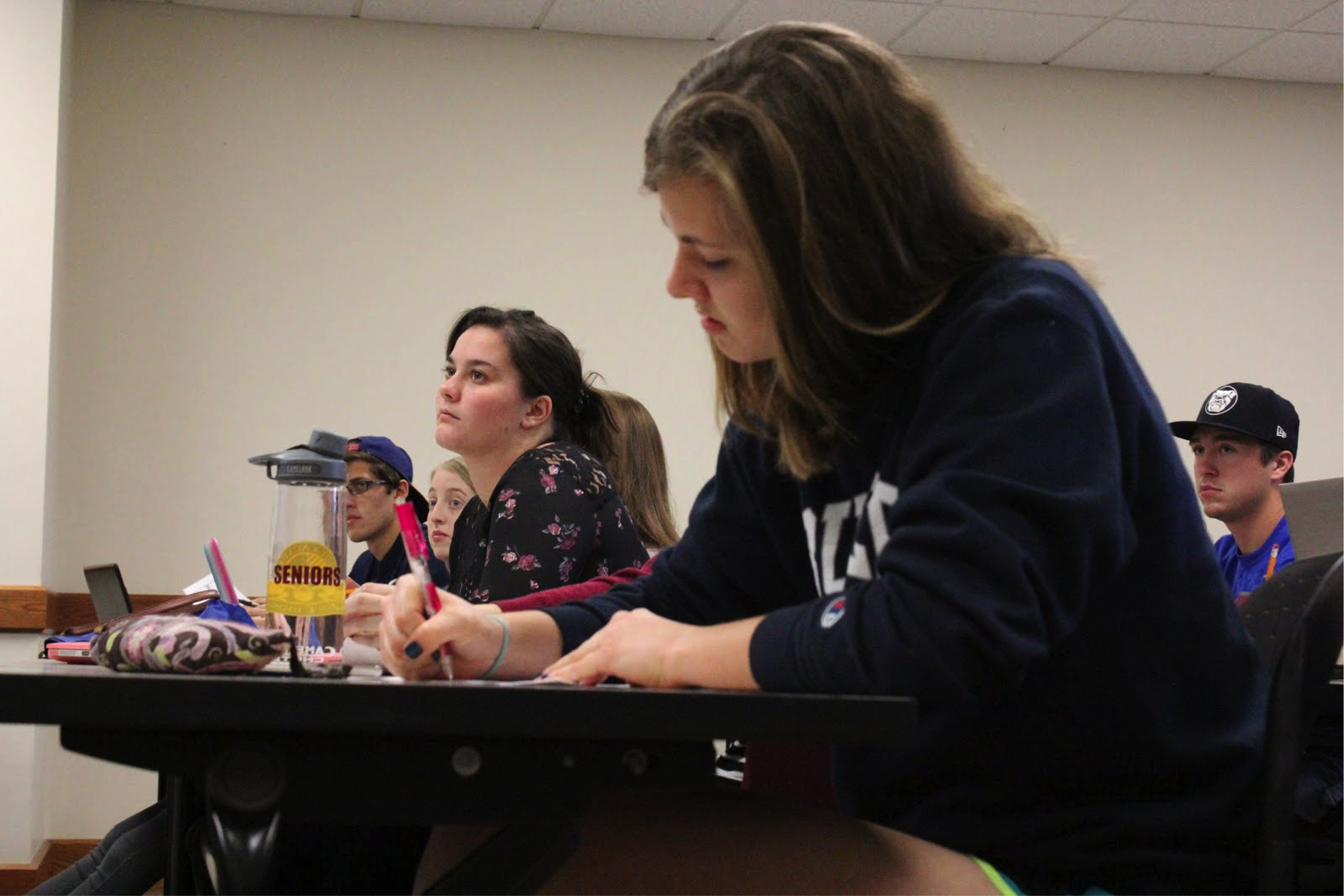 Rainie Grant, a sophomore political science and French double major, said she is looking forward to her spring advising meeting.

“I really love academic advising,” Grant said. “That’s probably one of the things I look forward to the most during the semester, because there are a lot of courses that I have the flexibility to choose whatever courses I want, which is beautiful. I love that flexibility. And my advisor is really helpful.”

Grant said her advisor, Terri Jett, gives her free reign to pick her classes and has faith in her.

Jenn Mann, student development specialist and academic advisor, references the screen during the Oct. 13 workshop “Getting Ready for Your First Advising Appointment.” Photo by Erin Marsh

Abraham Diop, a first-year international business and marketing major, said he has set up his appointment but is not prepared for it.

“I don’t know any of the classes I’m supposed to take,” Diop said. “I haven’t looked into it yet or anything like that, so I’m not prepared at all.”

Diop said he procrastinates but does plan to look at his classes before he goes into his meeting. He said his first advising appointment for his fall classes went well.

“She was really sweet,” he said. “I loved it. She worked with me, gave me a bunch of advice, which probably helped me in the long run, because I probably would have taken some classes that I didn’t need to. And so I thought the whole process went really well.”

Jennifer Griggs, director of the Learning Resource Center, said Butler’s academic advising demonstrates Butler’s faculty’s commitment to student success. Griggs said faculty advisors are resources but they are not responsible for students making the progress they need to make.

“They are really responsible for understanding their curriculum,” Griggs said. “You’re adults, and it’s your education. You’ve made the decisions about what your academic programs of study are going to be and what your goals are. It’s important for students, particularly even freshmen or first-year students, to take time in advance of that advising appointment to do their homework.”

Griggs said the Student Center tab in students’ My.butler accounts is underutilized by students. She said students can use “academic requirements,” which has each individual student’s program or programs of study applied to it and helps students know what classes they have taken and what classes they still need to take.

Additionally, she said there is a “what if” report which students can run. This plays out scenarios for students if they want to see what their schedule would look like if they wanted to change a major, add a minor or something of that nature. If students utilize these tools beforehand, Griggs said some advising time can be about doing four-year planning and not just next semester’s classes.

A student takes notes during the Oct. 13 workshop “Getting Ready for Your First Advising Appointment.” Photo by Erin Marsh

Grant said she always prepares before her meeting.

“I definitely look through all the courses and pick, of course, my first choice,” Grant said. “Sometimes I’ll even go and pick a second choice just in case those don’t work out what I go to enroll. Definitely look into what classes you want to take ahead of time. I know some people just go in and they kind of want to be spoon-fed, so to speak.”

Butler uses priority registration for enrollment, which means that the closer students are to graduation, the earlier they can enroll. This can result in first-year students and sophomores not always getting their first choice because they are the last students to enroll in classes. While this may seem unfair to younger students, Griggs said this helps upperclassmen ensure that they are enrolled in the classes needed to graduate on time.

“I don’t think that we’re in the business of messing up people’s graduation dates – quite the opposite,” Griggs said. “We really want to make sure that we are very thoughtful about what people need and are making sure that they’re on track and offering them what they want.”

She said it is important for first-year students to know that they will have plenty of time in the future to take classes they may not be able to take exactly when they want to take them.