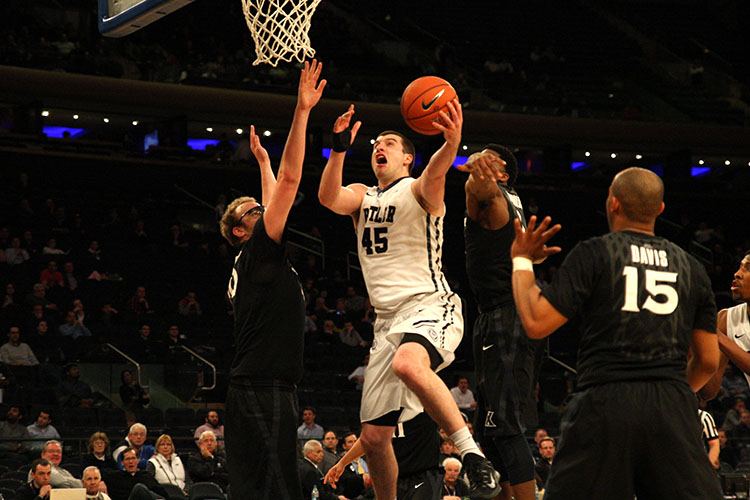 On Tuesday, the Butler men’s basketball team took the court together at Hinkle Fieldhouse. That is nothing special, right?

Many of the players spent their summer at Hinkle, doing drills and lifting weights. Since school began in August, all of them have been there, getting individual instruction from coaches and going through group workouts.

However, Tuesday was special – it was the first day of official team practice.

The season has begun.

Redshirt senior Roosevelt Jones said he has been looking forward to the start of practice since the team’s season-ending loss to Notre Dame in March.

“Definitely excited,” he said. “I’ve been waiting all year to get back. (We) had the tournament loss, I was itching to get back on the court and I’m glad to be back out here with my teammates.”

Jones is far from the only player that is excited to be back on the floor. Head Coach Chris Holtmann said that he can sense his entire team’s excitement.

“What you hope is that that excitement translates into a good, everyday approach that our guys need to have,” Holtmann said. “A good, consistent approach. It’s easy to be excited now. We want them to be excited three weeks into practice too.”

It should not be a problem for the excitement to continue for the Bulldogs. Their first exhibition game is just around the corner – an Oct. 31 matchup with Taylor University. They will have a second preseason game on Nov. 7 against St. Joseph’s College before tipping-off the regular season on Nov. 14 against The Citadel.

For now, Holtmann said the team still has plenty of work to do before the season begins. Each practice, he starts by having the players work on defense. Jones said that it helps emphasize that the team must have a defensive-minded approach.

“Butler’s always been known for their tough defense, so we want to keep that in our system,” Jones said. “So everyday at the start of practice we first work on the defensive details, and then we go through that the whole practice.”

The team has just two freshman this season – Sean McDermott and Nate Fowler. McDermott said that for him, the start of practice marks a major milestone.

“With the official practice starting, we’re a part of this now,” he said. “It’s college basketball. We’re in it now. We’re stating to feel it, we’re starting to get adjusted to things and we’re moving forward each day.”