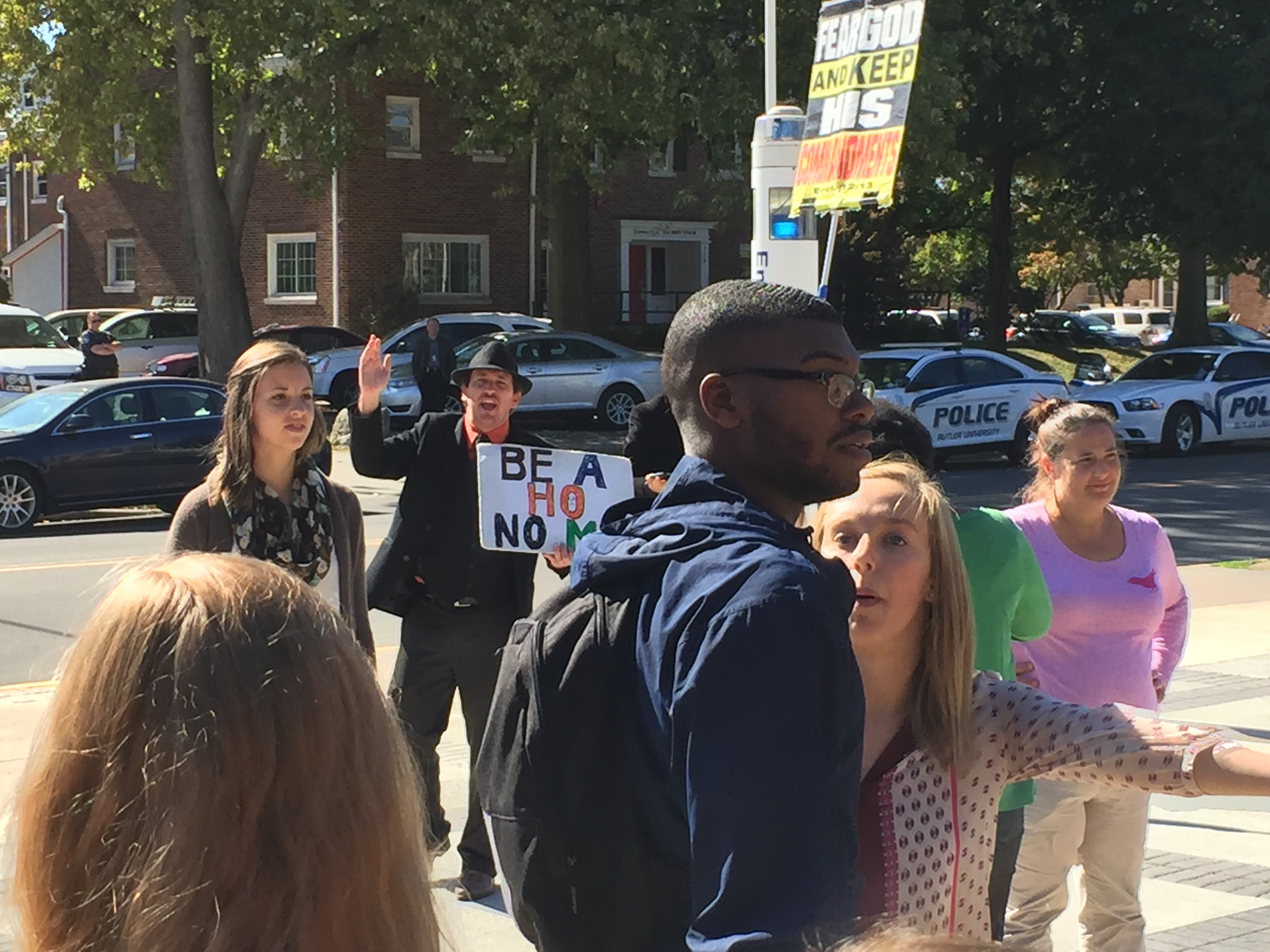 Butler University students encountered members of the Campus Ministry USA group this afternoon in front of Atherton Union and gathered together to voice their desire for equality and love.

The Campus Ministry USA members held signs saying “Be a Ho No Mo,” “Repent or Perish,” “You Deserve Hell,” and “Fear God and keep His commandments.”

Meanwhile, Butler students waived rainbow colored flags in support of the LGBT community and held signs supporting equality and freedom, such as one that said “I Love Sex, I Love Love.”

Across the street, the Phi Delta Theta fraternity house played music which drowned out the protestors.

Junior Vic Overdorf, who offered free condoms to students passing by, said she thinks the group came to campus because of Butler’s recent announcement that the university is introducing gender-inclusive restrooms.

“To be honest, a lot of what they’re saying is what I think the student body thinks,” she said. “Why I’m out here is that I don’t want people at Butler to think this is the narrative. I want them to know there are people that aren’t going to slut-shame them or be homophobic.”

Freshman Justin Woodcock passed by Atherton Union and saw groups of people gathered. Once he heard what was going on, he was disappointed with the message being spread.

“The fact that they’re here and spreading all that hate is terrible,” he said. “It goes against every message like equality, diversity. It’s hateful and mean. There is no place for it here.”

“That’s OK, people can disagree about things,” he said. “That’s why we come out here to talk with people and dialogue, present a different point of view. We’re not just here to hold signs, we want to dialogue with people.”

“College students are the future of America,” he said. “They’re the future presidents, the future lawyers, future congressmen. I’m concerned about our future.”

John Conley, assistant chief for the Butler University Police department, said the department and administration had been monitoring where the group had been visiting in order to “determine a plan, what do we do when they get here.”

“We didn’t know they would be here today,” he said. “We knew they would be here sooner or later, and it ended up being sooner. But we knew what our mission would have to be, and as law enforcement officers we know what they can and can’t do legally. We tried to keep that peace between the two groups.”

Conley said the activity on Butler’s campus was calmer than what he had heard of at other campuses, due in large part to student involvement.

“Anthony did an excellent job organizing the students here,” Conley said. “Anthony is one of the best leaders I’ve seen step up last minute on campus to do what he could to help.”

Murdock said he wants to see Butler students come together and show love for one another.

“Butler students shouldn’t be distracted by hateful language,” he said.

Sally Click, dean of student affairs, said she first heard of the group when her daughter, a student at DePauw University, said they had come to Greencastle, Indiana.

She said comments can be “hurtful to targeted groups.”

“We don’t tolerate harassment and bigotry,” she said.

Katelyn Sussli, president of Butler’s Student Government Association, said she was proud of the students’ reaction.

“I’m very proud to be a Butler Bulldog right now,” she said. “We have all come together and celebrated what makes us such a great community here.”