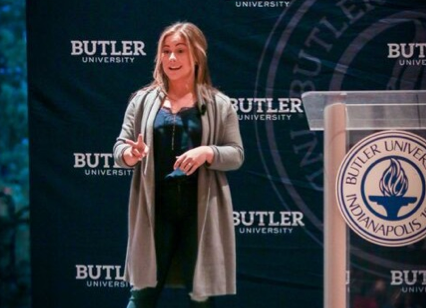 Johnson gained fame after competing in the Beijing 2008 Olympics in artistic gymnastics. There, she won four medals, three of which were silver and one gold.

However, the journey to the Olympic podium was not easy.

Her presentation revolved around three life-changing events that helped to shape her as a person.

She began with how she made friends when she was young. As a child, Johnson faced many social hardships and often felt like she did not fit in with her peers outside of gymnastics.

“I’ve continued with that pattern my entire life,” she said. “Which I love, because going into gymnastics and now this part of my life, it’s worked out better.”

She began gymnastics when she was about 2, and started training for the Olympics at 8 years old.

As she entered the Olympics at 16, Johnson had been undefeated for years. The world had placed high expectations on her to win a sweep of gold medals.

The moment in which she knew that she could not win gold in the all-around, her best event, was devastating at first. She even considered not performing her floor routine, which was her strongest suit. However, she had an epiphany as she stepped onto the mat.

“I remember thinking to myself, right before I stepped out to go, ‘If you can’t win the gold medal, at least show the world you deserved it,’” she said.

Typically, floor routines left Johnson exhausted. However, she said the next minute and 30 seconds were the most exhilarating she had ever experienced.

“For some reason, I remember, in this routine, feeling weightless, feeling like I could have done 12 routines following it,” she said with a laugh.

Johnson explained that the silver medal in the all-around was her favorite part of the Olympics.

“I always tell people that whether you’re coming in at 150th or first, if you can face yourself at the end of the night in the mirror and say, ‘I gave everything I had,’ then you succeeded. And if you’re wearing a gold medal and you look in the mirror and say ‘I didn’t really try that hard’, then that’s not a success to you.”

However, she found that the media did not share her enthusiasm. After the first day of the Games were over and she carried her silver medal, she went through a line of reporters, who all asked her one question: “How does it feel to lose?”

“Nobody, except my parents and my coach, were going to tell me congratulations,” she said. “I had to find it in my heart to say, ‘OK, they’re telling you and asking you, ‘Did you give enough? What could you have done better? Could you have done anything better?’”

She said she knew she gave everything, which was enough.

The next day, Johnson won gold in beam, but it still did not mean as much to her as winning the silver medal in the all-around event.

“I gave everything I possibly could,” she said. “I have zero regrets. It’s interesting how it makes you grow, because there’s no gold medal that I could get now, and no congratulations that would be better than a silver medal and having to find that out for yourself. It definitely tested my strength as a person.”

In January 2010, Johnson went skiing and tore her left ACL. After reconstructive knee surgery, she felt determined to compete in the 2012 Olympics.

However, a month before the games were set to begin, Johnson retired. She said she felt she simply did not have the passion for the sport anymore, and was completely exhausted after treating her knee injury.

Weighing in these factors, she did not want to take opportunities away from girls that had been training for the event. Understandably, her parents and coach objected, but they eventually trusted her judgment.

Johnson explained that the decision to retire was the hardest she had ever made, but she has no regrets. From the experience, she learned an important life lesson.

“Going against what people tell you is the right thing for you to do is hard, but it ended up setting me up for the life I wanted and needed,” she said.

Since the Olympics, Johnson has done many exciting things with her life, including competing on two seasons of Dancing with the Stars and participating in the Celebrity Apprentice.

“She’s a great role model,” sophomore Lauren Wiley said.  “She talked a lot about being yourself and not giving up what you believe because of what other people think you should do”

There is something to be said about the fact that Johnson, as an Olympic athlete and public figure, can make her story so relatable to such a wide audience.

Her successes and failures can apply to school, work and many other aspects of life. Her most important lesson, however, is simple.

“You always have to follow your heart, no matter what.”