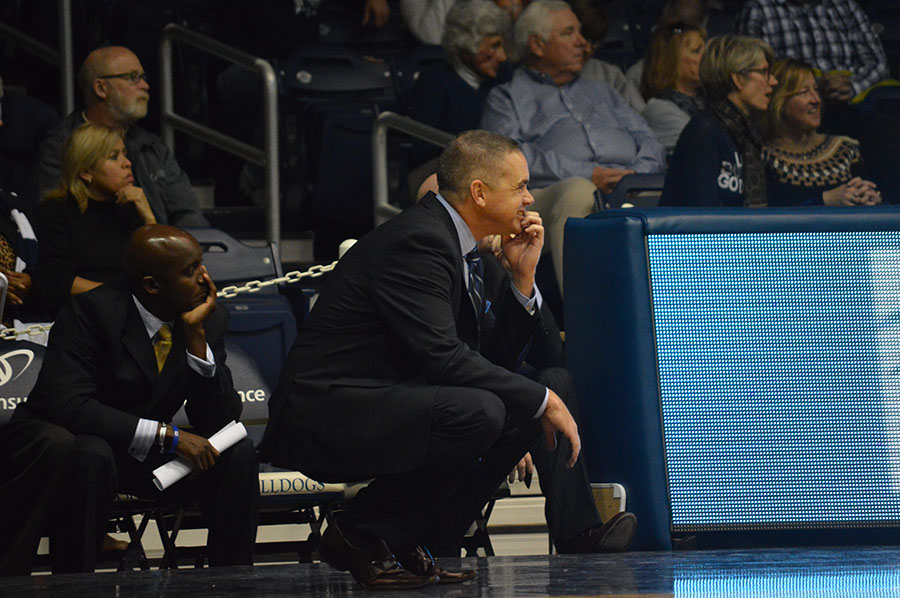 There’s no 30 second shot clock or buzzer to beat in the three or four hours before game time. For Butler men’s basketball coach Chris Holtmann, time is filled by a pre-game meal and occasional workout. And then, said the coach, pacing the minutes until tip-off.

“I can be found somewhere wearing out the carpet, pacing the floor of my office or home…I’m joking,” Holtmann said.

He added that he was only partly joking.

“I’m not as paranoid about a ritual as some coaches, but you tend to fall into the same pattern,” Holtmann said.

For now, the season’s first tip-off lies over a month away, and Holtmann’s daily pattern focuses mostly on recruiting. During the off-season, the coach can spend four to five hours on the road, flying if necessary. While recruiting is the foreground of the coach’s routine now, preparations continue for the approaching season.

Already, the coach has cycled through one set of individual meetings with each of his players. These meetings continue throughout the season. Behind the doors of his office, players share whatever is on their mind both basketball and non-basketball related.

“I feel like we have great kids, so I want to spend time with them, get to know them, and build a relationship with them,” he said.

The coach hopes to develop bonds and make an impact on young lives similar to the effect NAIA Hall of Fame Coach Paul Patterson had on Holtmann’s while at Taylor University. With his office located beside the locker room, players see Coach Holtmann every day as they roll into practice. All 14 players address him as Coach. But at home, Holtmann is a husband and father.

Basketball season at Butler brings a change of pace to campus, and calls a national spotlight on the school. It can also create long days for its coach. Mornings are spent at staff meetings or preparing for practice. Last year, practices didn’t start until the late afternoon or evening. After wrapping up, film was studied before leaving Hinkle around 9 p.m.

Speaking to the long hours and stress of coaching at a high-level, Holtmann noted that most coaches know what they are signing up for. The challenge is managing pressure the right way.

“It’s something that I’m evolving into doing an increasingly better job the older I get,” Holtmann said. “I’ve made some bad mistakes when I was newly married. I think you learn as you go through this that you’re a team and you’re in this together. Your wife and your family feels it as deeply as you do.”

For Holtmann, his identity as a coach is not something that shuts off as he leaves Hinkle Fieldhouse.

“There’s not a morning that I wake up, or there’s not a night that my head hits the pillow that I don’t think and feel the responsibility of leading this program to the very best that I’m capable of  because of the tremendous heritage and tradition at Butler,” Holtmann said.