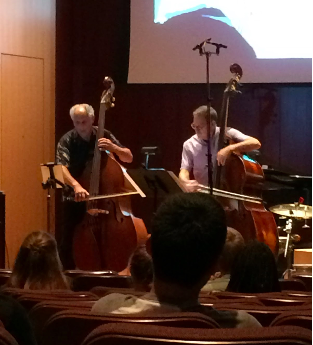 Music and spoken word combined to tell the story of a musical protégé on Wednesday night.

“Anna’s Way,” a story written by Alan Scofield, was performed at Eidson-Duckwall Recital Hall to a small audience of Butler students and members of the Indianapolis community.

The story follows the ups and downs of 15-year-old Anna, a talented but doubtful bassist.  Her grandfather also played the bass and enlisted his old teacher, Master Chen, to come out of retirement to show Anna her true capabilities.

Master Chen shows Anna how to bring happiness and fun into her playing.  By the end of the story, Anna knows she can not give up her passion of music.

“All of creation unfolds like music,” Murray said, portraying the stoic Master Chen.

He was accompanied by Catherine Bringerud on the piano, Jon Crabiel on percussion, and composer and guest bassist Barry Green on the bass.

“As musicians, we are proud to be sharing our gifts with the world,” Green said.

The performance also included pictures and video to go along with the story, and incorporated  West African, Argentinian, and Baroque styles of music.

Old friends Murray and Green opened the show with a bass duet by Tony Osbourne.  The duet consisted of three parts: a jazzy Intrada, a soft Romanza, and a dueling Scherzo.  Green said the Romanza was “one of the most beautiful and romantic pieces I’ve ever played.”

The unusual combination of narration and music made the performance refreshing and captivating to see.

“It was a very interesting show because the music melted in the story instead of just being the story,” audience member Sarah Grant said.