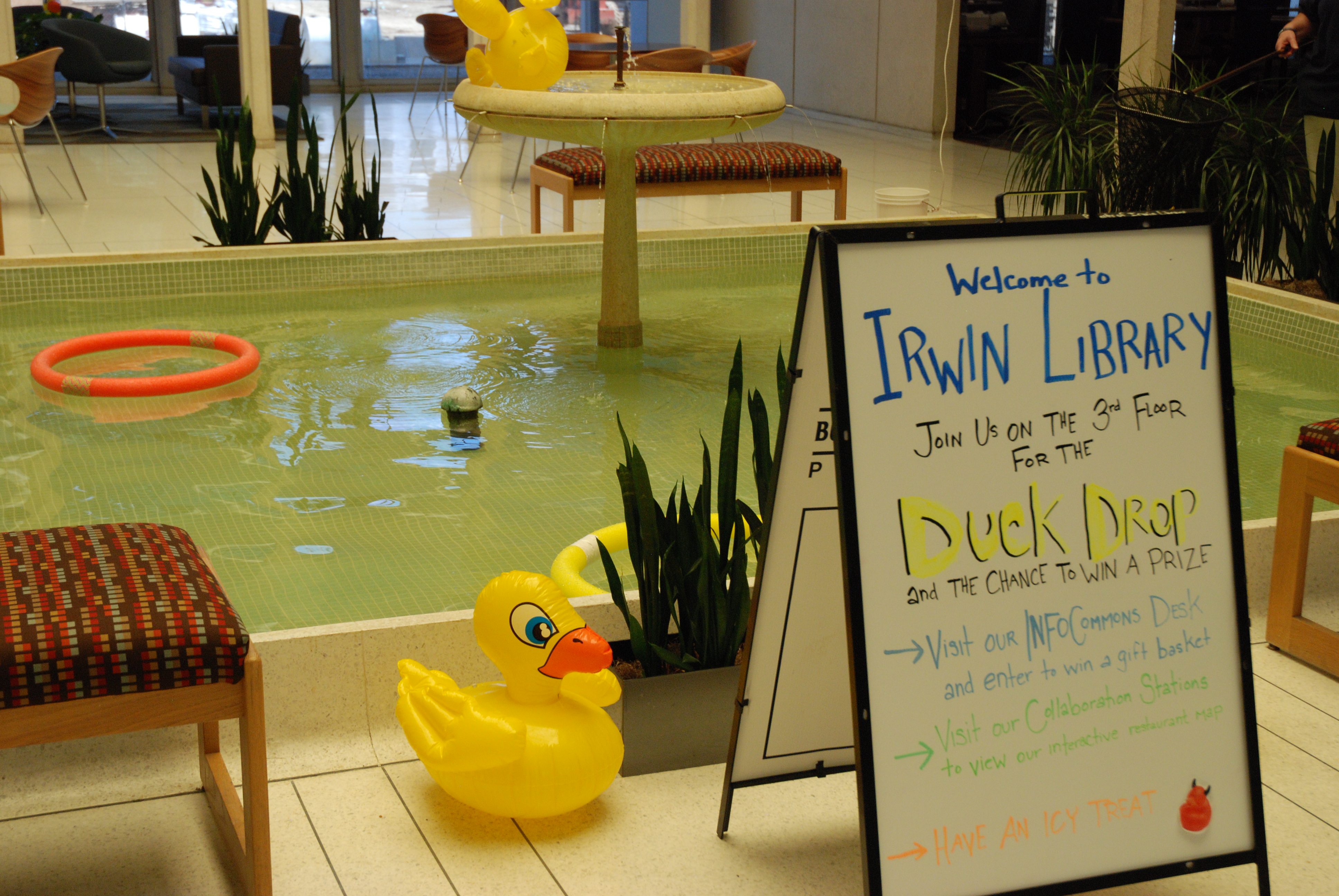 For the first week of classes, the Butler University libraries remain quiet and subdued. Students trickle in to explore and to rummage, and then they likewise flaunter out to enjoy the last few hours of freedom. However, on Saturday, Irwin Library experienced a flourish of visitors as the incoming freshmen class participated in the annual Duck Drop.

The Duck Drop began, unconventionally, at a Christmas party in 2000. Sally Childs-Helton instigated the drop. As the special collections, rare books and university archives librarian, she found herself in charge of organizing entertainment for the library staff’s holiday festivities.

Her first decision was one she had considered even before she truly began working for Butler.

“When I interviewed here, I looked over the edge and thought, ‘If I get this job, we are throwing ducks,'” she said.

To her, the third floor balcony loaned itself as the perfect location – and, with a usually relaxing fountain straight below, dropping toys into it just seemed obvious.

“What else do you do when you have three stories and a pond?,” she asked.

Childs-Helton bought a small collection of rubber ducks and constructed rings out of pool noodles and duct tape, which the library still uses today. The Duck Drop became a party tradition, a chance for the staff to enjoy the merits of the multi-storied building.

“It tends to come down to sudden death playoff,” she said. The rules change every year, she said, and it usually grows very competitive.

About four years ago, Childs-Helton said, the Duck Drop moved from a staff event to a part of the freshmen orientation activities.

“We were looking for something more interactive,” she said. “And you can’t really do a mini scavenger hunt or something like that. So we ordered a bunch more ducks.”

Occurring the day freshmen move into the dorms, the Duck Drop encouraged new students to visit the library and explore its amenities. They could explore the information commons desk and climb up to the third floor.

“I was really bad at it,” freshman exploratory major Ashlyn Edwards said. “But it was fun.” While Edwards did not score, she and her fellow participants entered their names into a raffle for a Butler-themed gift basket.

The goal, Childs-Helton said, was “to get people in the door, to get them used to coming in the building and to make this a familiar place.”

At the event each student received three ducks. If one landed in one of the floating rings on the first floor, the student earned a complimentary thumbs-up. However, if two landed accurately, the freshman was allowed to keep the duck. If all three scored, the student kept the duck and got his picture posted on the library’s Facebook page. Family members were allowed to play without receiving prizes. Instead, Childs-Helton said, they won infinite bragging rights.

Overall, Childs-Helton said this year featured the largest amount of students visiting the library on their first day. She credits much of the success to the ducks and supporting staff.

“It takes a lot setup and cleanup afterwards,” she said. “A lot of wet towels.”