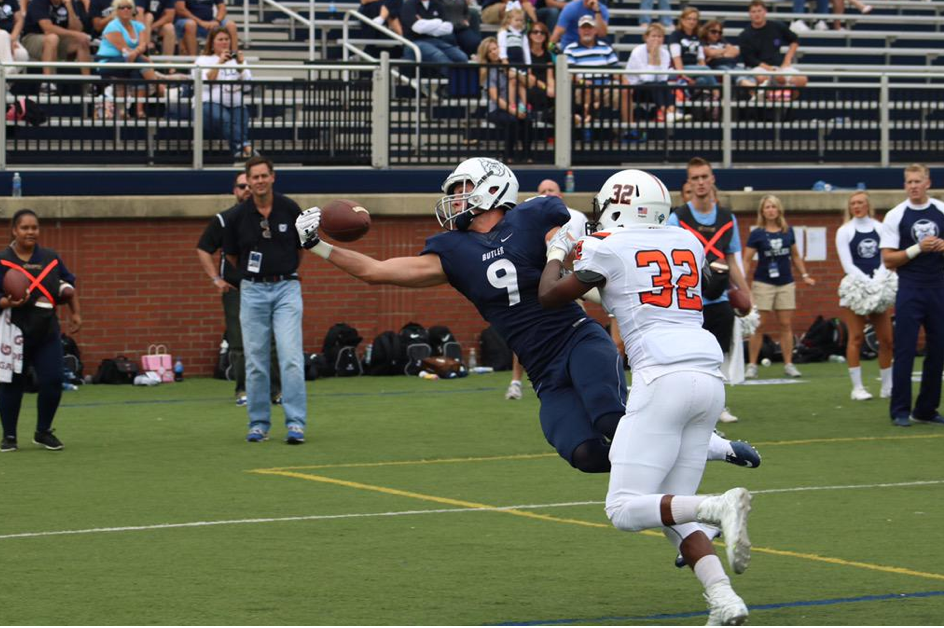 Unexpected fourth quarter action completely turned the Homecoming game around for the Butler Bulldogs (3-1, 1-0 PFL) as they beat the visiting Campbell Camels (2-2, 0-1 PFL) 25-24 Saturday at the Butler Bowl.

The large, and very loud crowd that had gathered stayed through the scoreless second and third quarters, after Campbell took the lead 14-10 at the end of the first quarter.

“It’s unbelievable, the crowd that we’re getting this year is nothing I’ve ever seen before,” Butler wide receiver Brandon Collins said. “As a senior, my four years here, this is the best that I’ve seen. The whole atmosphere kept us up and going and I think it probably was the straw for Campbell, they had to play us at home and the crowd kept us into it and kept the energy going the whole time.”

Collins was the one to bring in the game-winning one-handed touchdown catch from Matt Shiltz with 37 seconds to go in the game.

The Bulldogs were down 24-18, but, on the fourth down at Butler’s 29 yard line, Shiltz threw a 42 yard pass down the right sideline to Collins. With 54 seconds left, the Bulldogs reached another fourth down. Shiltz threw an incomplete pass but a pass interference was called on Campbell. This nail biter ending eventually ended with the one-handed catch and extra point from Jonathan Treloar, the Bulldogs moved ahead 25-24, after being down the entire game.

“All day we were moving the ball, but we were stopping ourselves,” coach Jeff Voris said. “We weren’t real disciplined in critical situations. We finally started being more efficient with our plays and guys started making plays too. It was a good fourth quarter after a little bit of a struggle through the middle part of the game.”

Shiltz led the Bulldogs with 234 passing yards and tacked on 83 rushing yards. He had two touchdown passes, a 7-yard pass to Freshman Pace Temple in the first quarter, and the game winner to Collins.

“It was electric out there,” Shiltz said. “Our defense gave us a chance, and we have to commend them, they played a great game. They kept us in the game when we were struggling early on, and we knew we had to execute.

Campbell held a slight edge in total yards, 376-371, and time of possession, 31:57-28:03. Quarterback Kameron Bryant threw 213 yards and had one touchdown in the first quarter. Running back DeShawn Jones ran 133 yards, his one touchdown a 72 yard quick break away.

Next week is a bye week before Butler takes on Morehead State on Saturday Oct. 10. in Morehead, Kentucky.

“We view every opponent one week at a time, it’s a one week season every week, and that includes the bye-week,” Shiltz said. “We need to be able to do the little things right now with preparation and really focusing on those detail oriented things. We’re not really preparing for an opponent this week, we’ll get a little headstart, but we really need to crack down on those key fundamentals.