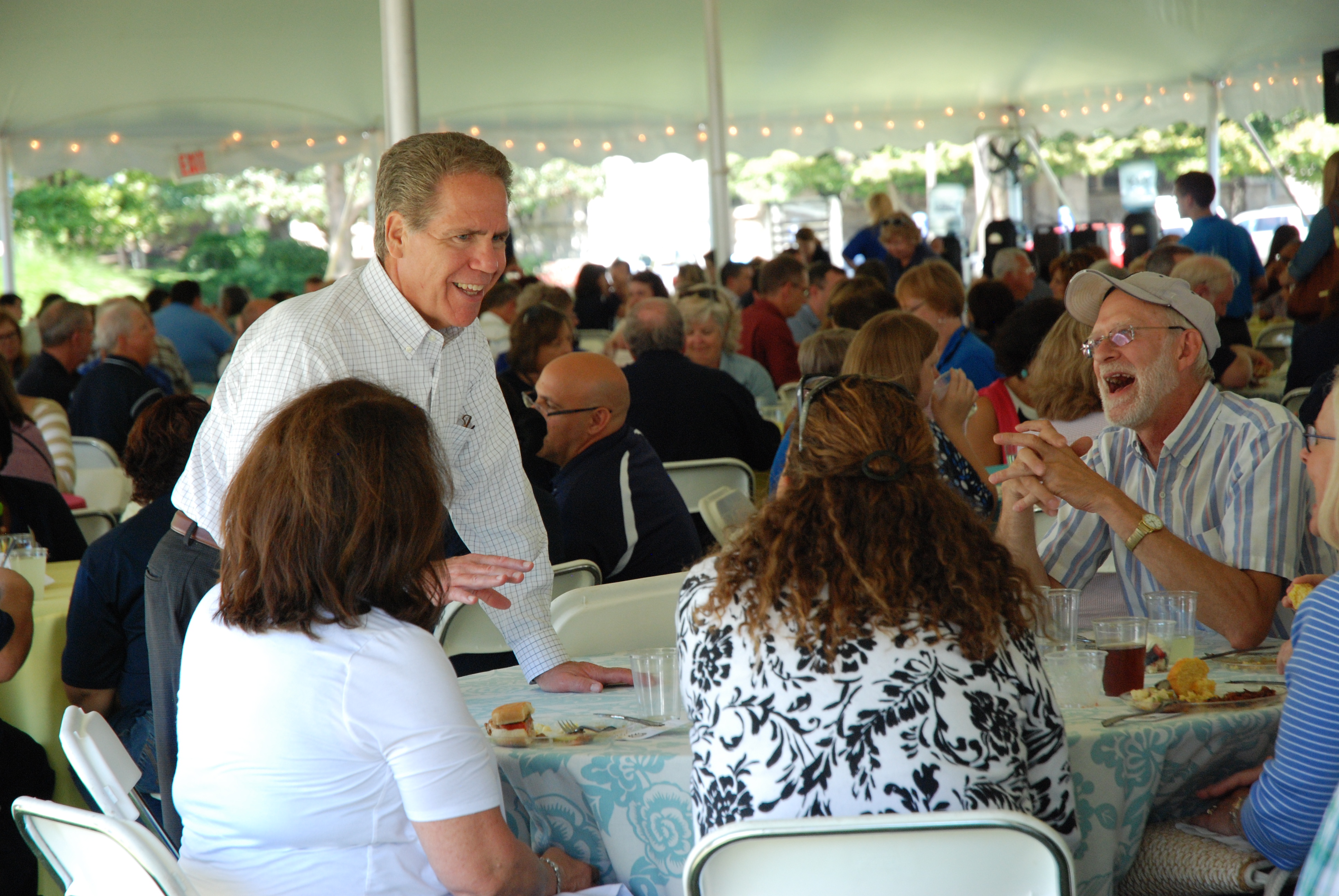 Butler University President James Danko’s five-year contract extension gives him the opportunity to see the Butler 2020 Vision through to completion.

“The Butler 2020 plan is a pretty long-term, comprehensive plan,” Danko said. “There’s a lot of a things that are going to be happening here on this campus in the next five years. I absolutely want to be here to see them through fruition.”

The extension was announced Friday at the Academic Year Welcome. Board of Trustees Chair Keith Burks announced the unanimous decision by the 28 members of the board to faculty and staff to extend Danko’s presidency to 2020.

“Jim has a great vision, excellent strategy and, moreover, he empowers people on campus,” Burks said.

Danko began his presidency at Butler in 2011. Most of the changes and progress made during Danko’s term have been through Butler 2020 Vision.

“We wanted to get Jim locked in to guide us through 2020,” Burks said. “There’s a sense of relief that he will lead us through the foreseeable future.”

Butler 2020 Vision is a strategic plan, created in 2012, that hopes to make progress on four key areas by the year 2020: campus environment, academics, health and safety, and leadership.

Campus environment changes are clearly visible. Since Danko’s arrival, the Streetscape Project has been completed, the parking garage is near completion and the new student housing is well under way. Danko launched an  innovation fund in 2012 to provide students and faculty grants to invest in ideas that will “help put our university on the map.” So far, Butler has invested in 28 projects, according to the Butler website. These include a student run sports media outlet, a journal for undergraduate research and a gaming lab.

Danko took clear stands on political and social issues in addition to Butler 2020 implementations. The Desmond Tutu Center opened in the 2013-14 academic year. The center’s focus is social justice and leadership development, according to the Butler website.

President Danko specking about his extension

He was the first president of an Indiana college to speak on the Religious Freedom and Restoration Act in 2015. Danko also made strides to address the issue of sexual assault on campus through the creation of the Presidential Commission on Sexual Assault.

Danko experienced the first year of Butler’s participation in the Big East conference in 2013. Danko said in an interview with The Butler Collegian last year that “[the transition to the Big East] was a challenge athletically, but [Butler] remained competitive academically.”

Danko expressed interest in addressing several other issues on campus which have yet to come to fruition. In a 2012 interview with The Butler Collegian, Danko said one of his goals was to see enrollment increase.

“We’ve asked each of the colleges to think about a creative opportunity in their areas to help us grow,” Danko told The Collegian. “It could even be a non-degree program.”

However, Danko told the faculty and staff in an email message dated August 12 that enrollment projections are down for the second consecutive year, which will make budget revisions necessary.

“Leaders across campus, including Vice Presidents, Deans, and Directors, have been engaged over several weeks in a budget revision process, driven primarily by a second consecutive year of enrollment projection shortfalls for new and returning students,” he said in the email message.

As of April 2012, 87 percent of the university was funded by tuition. At the time, Danko said he was surprised by the lack of endowment.

“The reality once you’re here is more stark than I expected,” Danko said. “Our low endowment puts us at a real disadvantage relative to the types of schools that people expect us to be like.”

At a town hall meeting in February 2012, Danko and Bruce Arick, assistant treasurer and vice president of finance, said they wanted to see endowment grow to $175 million by 2014. According to “Low endowment, less financial aid,” a Collegian article from April 3, Butler’s endowment stands at $180 million.

Danko also told the Collegian in October 2012 that he wants to see the university’s endowment grow to $750 million by 2025.

Danko placed a high emphasis on fundraising efforts in his inaugural address.

“We must enhance our fundraising efforts, we must also consider ways to grow our revenues through new educational initiatives,” he said.

Fundraising continues to be a high point of emphasis for Butler’s president.

“I am confident that we will achieve long-term success through continued fiscal discipline, investment in strategy and innovation, and enhanced revenue growth from fundraising and new, mission-aligned programs,” he told faculty and staff in his August email message.

In “Money Madness,” a Collegian article published March 25, Danko said this year’s scholarship and grant budget will increase by 6.3 percent. This will be confirmed in the release of the revised budget in September.

In his email message to faculty and staff, Danko emphasized that the university is on solid financial ground.

“While budget revisions are certainly necessary, I do want to stress that Butler is fortunate to be on solid financial footing, having achieved strong financial results the past few years,” he said. “Our continued strength in academic quality, increasing national recognition, and robust student enrollment position us well to further our educational mission and realize the Butler 2020 Vision.

In addition to financial concerns, Danko will continue to address campus issues like sexual assault.

The Presidential Commission on Sexual Assault was announced April 2014. Since then, subcommittees formed to discuss recommendations, which were projected to reach Danko’s desk by the end of the 2014-2015 school year. Any progress has not been made public.

Danko will address the university’s financial situation at the annual State of the University address, which will take place September 25.

The Collegian attempted to reach the president for comment Tuesday night, but he had not responded by press deadline.