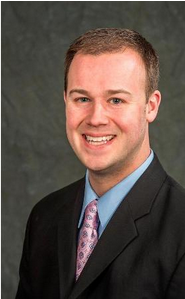 John Dedman ’03  is the school’s new associate athletic director for communication, according to a press release from the athletic department. Dedman will assume the responsibilities formerly held by Jim McGrath, who retired after working as Butler’s sports information director since 1981.

Read about McGrath and his career

“This is a tremendous opportunity to return to a place that means so much to me,” Dedman said in the release. “Butler has incredible momentum right now and I am honored to be part of the team that will continue this success.”

Dedman worked at Indiana Sports Corp since 2006, working as the vice president of communications for the last five years.

After graduating from Butler in 2003 with a degree in public and corporate communication, Dedman worked under McGrath as an assistant sports information director until 2006. He covered women’s basketball, volleyball, women’s soccer, softball, men’s and women’s swimming, men’s lacrosse and men’s and women’s tennis. He also provided oversight for the athletic department’s website and webcasting initiative, according to the press release.

Dedman will begin working in the athletic department June 29.