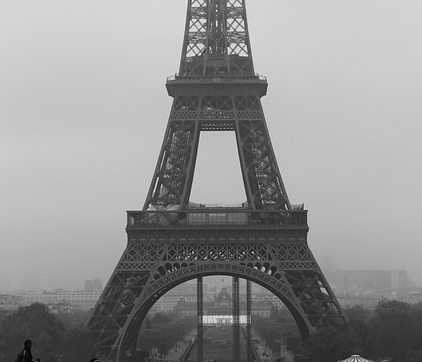 “No man is a catch if he does not love you madly.”

Cleage is known for writing on topics such as racism and sexism, and this production was no exception.

With an entirely African-American cast dominated by females, this play is meant to reverse the norm of how most plays are written.

“What I Learned in Paris” is a fairly new play, and therefore atypical of the standard IRT productions.

Once seen, however, one cannot question this play’s value.

The setting is an apartment room in Atlanta, Georgia, in 1973, when the first black mayor of a southern city was elected.

The play centers around four individuals who worked on the campaign trail and one independent divorcee.

With lots of twists and excitement all taking place within one room of an apartment, this climactic and intimate script allows for those electric human nuances we go to the theatre to see.

The caliber of the production value is as intricately lovely as one comes to expect of any IRT performance.

Period-appropriate music launched the audience into the world of the play from the first five seconds.

Careful detail was taken in the dressing of the stage, which is a very difficult feat when one is designing for a thrust stage.

Costumes were enticing, for the most part.

During a particular cocktail scene, however, all three women wore slightly varying shades of the same color.

Aside from this glaring issue, the costumes felt generally consistent for each character and for the 1970s.

All around, the play brought and maintained high energy that gripped audience members.

While I felt she occasionally got stuck in a similar rhythm of speech, she also touched my heart at several points in the production.

Cedric Mays played a two-dimensional character. While he delivered all that was required, it would have been more interesting to see him bring that third dimension to John Nelson.

LaKeisha Randle was by far the weakest link of the production. Her habit of overacting, looking like a cartoon amongst humans, was annoying. Yet even this fault was not enough to take me out of the flow of the play.

However, a great rumbling did interrupt the flow of the show the night I went to see it.

First, I felt it in my seat. After looking to my immediate neighbors in horror, I looked upward and saw the heavy lights tremble. A couple seconds of stillness, and then still more violent tremors permeated the performance space, shaking the beams overhead. We all started to get concerned for our safety, but the actors continued performing, as if nothing were going on. True professionalism.

During the act break, an IRT staff member informed us that we had simply arrived on prom night.

“This is prom season,” she explained with a shrug. “They meant to warn us about it beforehand.”

Although a simple mistake, the shaking of the building continued to startle me and distract me during the second act.

If you decide to see this delightful, feel-good production, be sure to ask for a night when there is no prom booming above you like the apocalypse.