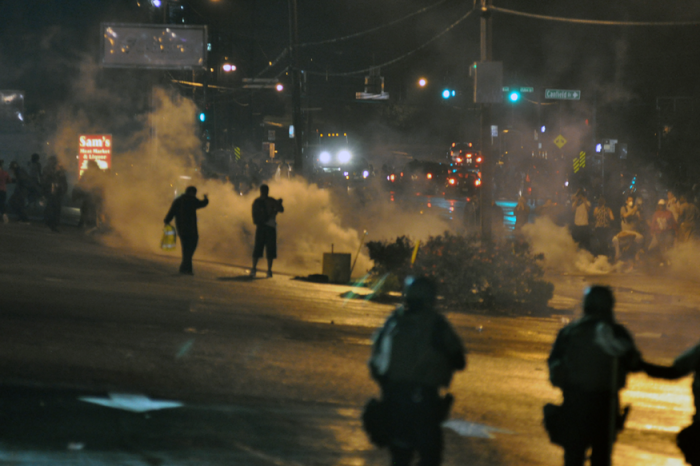 Human and civil injustice have been – and still are – some of the longest ongoing problems facing the human race.

However, problems such as the 1964 shooting of Medgar Evers, a civil rights activist and NAACP field secretary, can mistakenly seem like issues that belong to a different time.

She employed the musical talents of singer, songwriter and pianist Nina Simone to discuss the past and present nature of these monumental issues.

Carter applies Simone’s frustrated and accusing tone to the issues of today, such as that in Ferguson, the killings of Eric Garner and 12-year-old Tamir Rice, and a man who was shot five times in the back in North Charleston.

During her presentation Carter showed a video clip from 1965 of Simone performing the song.

The professor pointed out that Simone stares directly at the predominately white audience for most of her performance.

“It’s uncomfortable at times,” Carter said. “There’s a palpable anger and, I would argue, an implicit accusation here, one that I think is more important to see and feel than to read.”

Simone had to be careful, though, to avoid fitting the “mad black woman” stereotype through her explicit lyrics and obvious anger.

“She may have been unpredictable and often difficult, but, quite frankly, I have a hard time of thinking of musicians who aren’t,” Carter said. “And yet plenty of them skate by without being labeled as ‘mean,’ ‘insulting,’ ‘arrogant,’ ‘hostile,’ ‘unstable,’ ‘hysterical,’ ‘beset by inner fires’ or—seriously—‘a witch.’”

Carter also made note of the gender specificity of Simone’s label as a “witch,” and that there were many other significant male artists and figures who did not become labeled as a result of their music.

“I think we have to acknowledge that, in all likelihood, it has less to do with her actual behavior and much more to do with the fact that this was a lyricist who was angry while also happening to be both black and a woman,” she said.

Carter said “Mississippi Goddam” was not a disguised criticism of the social issues of the time, but a direct call for reckoning for specific instances of unacceptable injustice.

The lyrics of the song say, “Alabama’s gotten me so upset / Tennessee made me lose my rest / And everybody knows about Mississippi Goddam,” and “Lord have mercy on this land of mine / we’re all gonna get it in due time.”