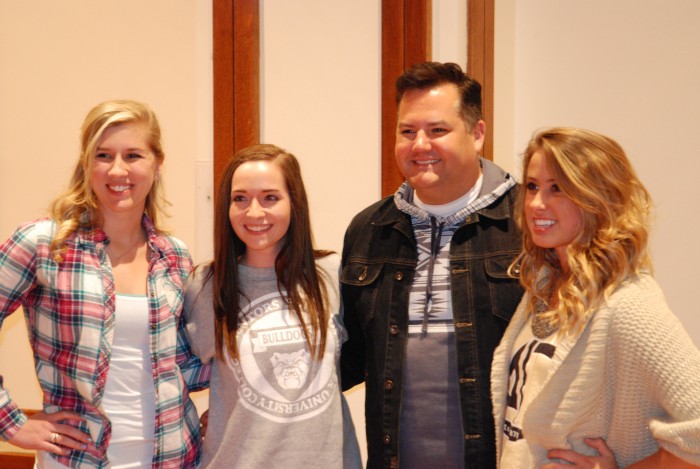 A Ford Focus pulls into a parking spot in Butler’s A-Lot. Waving with a friendly smile and introducing himself, students would not realize that this was not a member of the Butler community, but rather someone they had seen on television shows including Ru Paul’s Drag Race, The Tonight Show with Jay Leno, and Chelsea Lately.

On March 27, Ross Matthews entertained students of Butler University through an event presented by SGA’S Program Expressions Board.

Matthews was first introduced as the intern on The Tonight Show with Jay Leno and has become an entertainment personality. He has appeared on Chelsea Lately, and as a judge on Ru Paul’s Drag Race. He also had his own talk show, Hello Ross. Matthews also has a book, “Man Up!: Tales of My Delusional Self Confidence.”

Junior Nolan Mikowski, co-chair of Podium Expressions for SGA’s Program Board, was in charge of putting the event on, from early planning stages to the actual night of the event.

“I was the head man for everything Butler wise, I was the one who contacted his team, the one who worked with them with all details logistically for getting him here, working on the contract, making sure everything runs smoothly from his side to our side,” Mikowski said. “When it comes to contacting people, whether its Ross’ team, his agent, the PR department of his group, the catering company, IT, that was all me. I am the one who made that happen.”

Matthews performance included speaking to students about topics from dining halls to loving and celebrating one’s self.

The talk was very audience driven, as Matthews made time in his presentation to take questions from the audience. Matthews encouraged the crowd to ask whatever they wanted to know, as no question was off limits. He shared experiences from working with celebrities, famous friendships, a Christmas Eve at the Kardashian household, his work on Ru Paul’s Drag Race and personal stories from his career in entertainment. Matthews also played a pseudo dating game with members of the crowd.

The audience consisted of about 200 Butler students.

“I really liked how friendly he was and how much he engaged the audience. It made it feel more like he cared about who we were as people, rather than just a group of people he had to talk to,” sophomore Anya Gouloff said.

Mikowski also felt the television personality was personable, making Matthews a great celebrity to work with.

“I was blown away by how personable he was. Out of everyone I’ve met, he is right up there with the most down to earth people,” Mikowski said. “Everything worked with him, it was great. I have no regrets choosing him and it went very well.”

The audience appeared to receive this as well, as there was laughter and positivity that carried throughout his talk.

According to Mikowski, Podium Expressions has been and plans to continue working to bring more high profile celebrities to campus, including Josh Radnor, and even Laverne Cox last semester.