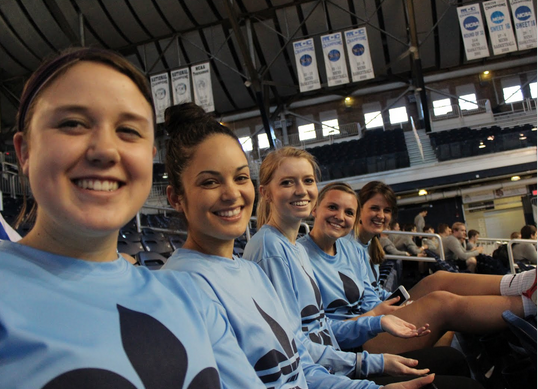 Butler students competed for a cause this past weekend during the annual Spring Sports Spectacular. Spring Sports is an event created to raise money for the Special Olympics. Every sorority and fraternity is represented, as well as an independent team for those who are not members of a Greek organization. The theme this year was outerspace.

Before the various sporting events and competitions began, Butler students paired up with Special Olympians and played a game of kickball to kick off the night. Each house had a cheering section to support the Special Olympians.

Those that chose to participate signed up for events ranging from Jenga and karaoke to soccer and basketball. The events began at 7:30 p.m. Friday night and the last event ended at 6:30 a.m. Saturday morning.

Megan McCaw, freshman psychology and criminology double major, got the opportunity to play on Hinkle Fieldhouse’s main court during the basketball championship game.

“Being up for 10 hours was interesting, but it was cool to play on the Hinkle court,” McCaw said. “I have been playing basketball since I was four. And Hoosiers is one of my favorite movies, so it was awesome to play a sport I love on a historic court.”

Sarah Crawford, sophomore exploratory business and spanish double major, said her favorite part was seeing the way all the houses supported one another even in the midst of competition.

“It was super fun and cool to see people stay up for 12 hours and be really supportive of one another, even if they weren’t on the same team,” Crawford said.

Students even had the opportunity to compete before the events actually started. The week prior to Spring Sports, Insomnia Cookies and Chipotle participated in a giveback for those who came in on a particular day. Houses could earn points for their team by saving their receipt as proof of participating in the giveback. Insomnia donated 5 percent of its profit from last Monday and Chipotle donated 50 percent of its profit from 5 to 9 p.m. Thursday to Special Olympics.

The proceeds from Penny Wars was also donated to Special Olympics. There was a table set up outside of Starbucks with a bucket for each team participating in Spring Sports to donate any change they had. Teams got points for contributing to their buckets.

“It is great because not only is it a lot of fun to go out and compete against other houses, but it’s for a great cause,” Mannell said. “It is just a great way to get everyone involved and helping our community of Special Olympians.”

Results of the winner of spring sports have yet to be released.