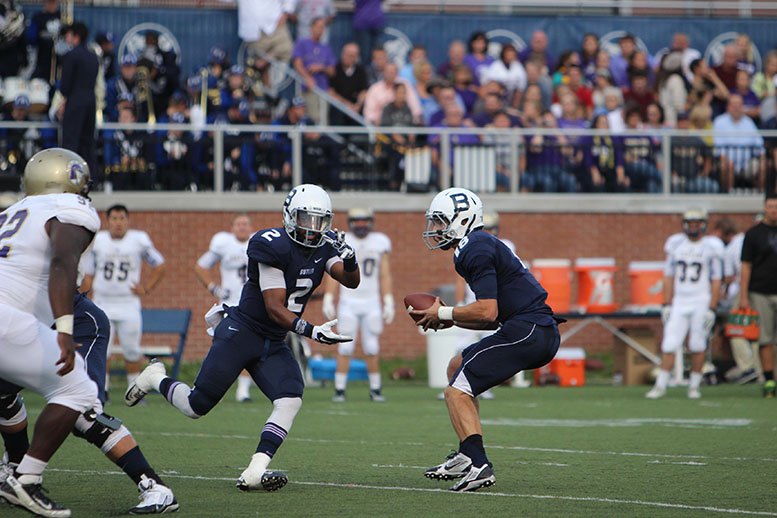 Fall football is right around the corner for the Butler University football team after it competed in the annual spring game last week.

Although the spring season is ending, the level of competition for the players has not. There are still many competitions for starting jobs on the team, including a battle for the starting quarterback position.

Juniors Malcolm Weaver and Matt Shiltz split time last fall between playing time after Shiltz went down with a hand injury that left him out for final five games of the season.

Shiltz beat out Weaver for the starting job after summer camps.

“Whenever someone comes back from an injury, that is always the mindset you are trying to have,” Shiltz said. “Having the hand injury last year allowed me to further improve by giving me extra time in the film room, as well as helping out the team by being an extra set of eyes on the field and helping the younger guys during the season.”

Shiltz completed 14 of 20 passes for 102 yards in his action on the field Saturday.

Weaver on the other hand went 10 for 17 passing for 116 yards and threw two touchdowns.

Weaver and Shiltz play different styles at quarterback as Weaver is a read-option type player, while Shiltz has been a threat passing and on the ground.

Before Shiltz got hurt last season, he ranked top-10 in FCS Football in total offense.

No matter the decision of the starting quarterback, the redshirt-junior Shiltz said he knows the coaching staff will make the right team decision.

“I know all the quarterbacks are working on improving our individual skills in terms of footwork, accuracy, and overall knowledge of the game, as well as our chemistry with the rest of the offense,” Shiltz said. “When the first game rolls around I know the coaching staff will start whoever they think will give the team the best chance to win.”

Schrader played 10 games and finished with 604 yards and nine touchdowns in 2014. In the spring game, he rushed for 94 yards and scored a touchdown.

After five weeks of spring practice, Butler still has the summer and fall training camp in the fall to see who will take the starting roles in 2015.

No matter who starts, the Bulldogs will be on the Butler Bowl for the first time against Franklin College Sept. 12.

The season opener is Sept. 5 at Indiana State University. The Bulldogs last played the Sycamores in 2011, a 48-34 Butler loss.

Full schedule can be found here