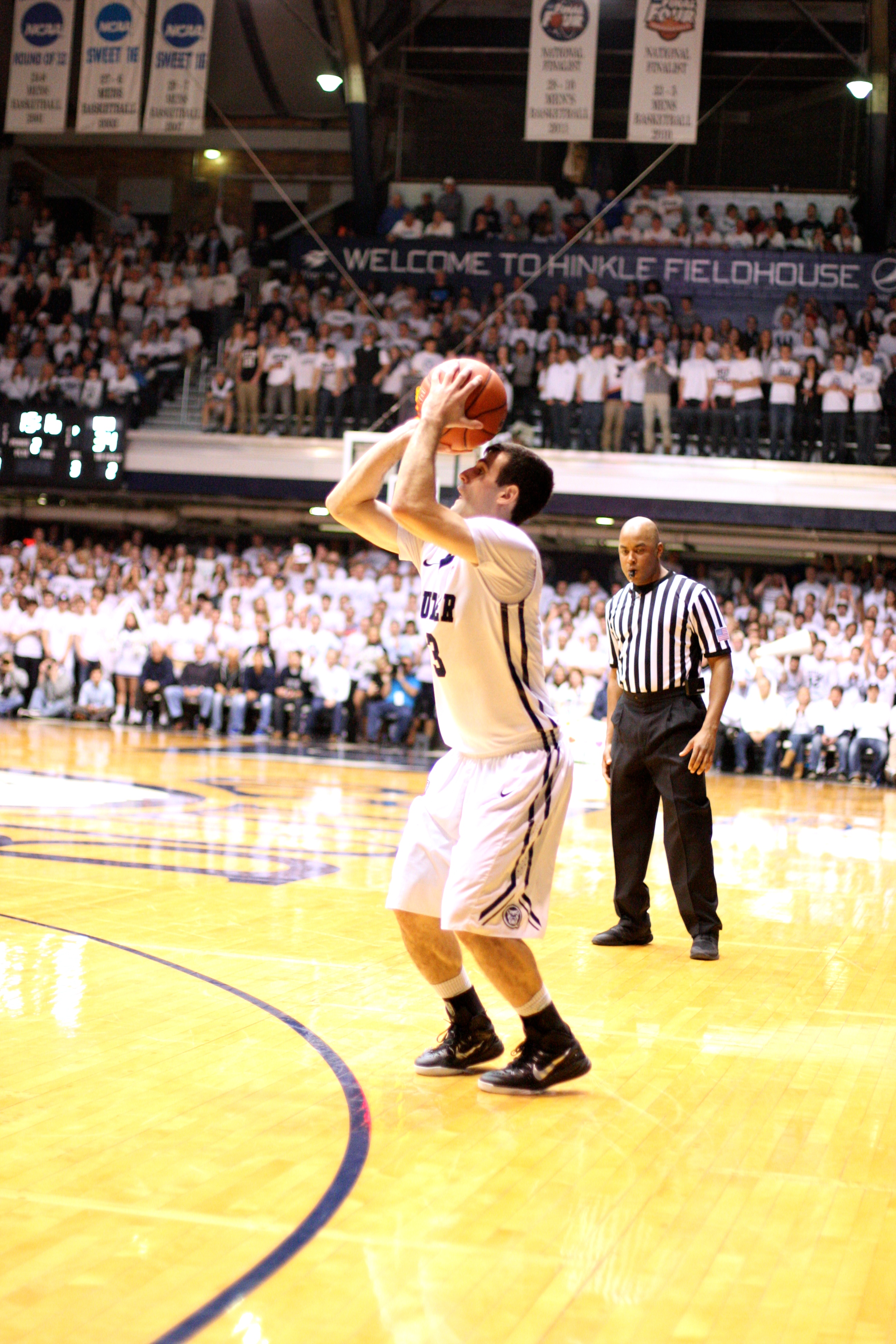 Alex Barlow chases down basketballs scattered across the Hinkle Fieldhouse floor and puts them back up on a rack. He pauses and waits for his signal, and he again starts a barrage of three-point attempts.

Barlow has been doing this all week in preparation for tomorrow’s State Farm Slam Dunk and 3-Point Championships, which will be held at Hinkle Fieldhouse as a part of the Final Four festivities.

Barlow, who will be graduating next month, said he is excited for one last opportunity to play in front of a Hinkle crowd.

“I didn’t expect when I played against Georgetown to be able to play in front of some fans again here,” he said. “I think it will be a fun environment. It’s always fun to get out on the court and compete, regardless of if you are playing five-on-five, doing a dunk contest or a three-point contest.”

Barlow isn’t the only Butler University senior who gets one last chance to play this weekend, though. Kameron Woods was selected to play in the Reese’s All-Star Game at Lucas Oil Stadium Friday.

National Association of Basketball Coaches selected 20 seniors to play in the game, which is the final event of Reese’s Final Four Friday. The game will tip off at 4:30 p.m. following open practices and press conferences by the four semifinalists.

“I am extremely thankful to be able to play down at Lucas Oil,” Woods said. “It will be a cool experience to get to play with a lot of guys that we competed against this year and last year.”

Woods said he will practice with the team Wednesday and Thursday, as well as participate in other team events.

Butler junior Kellen Dunham said it is a unique opportunity and a big honor for two players to get one last chance to play, especially this close to home.

“I think those two guys are definitely rewarded for great careers here, and I wish we could do even more for them,” Dunham said. “I think it’s a very good representation of Butler University in these postseason activities.”

Dunham said Barlow has the perfect shot for a three-point contest.

“It is very compact, he doesn’t jump too high and wear himself out,” he said. “He’s got a nice little loft to it. I think he’s got a good shot at winning it.”

Woods is on the East Team’s roster in the all-star game, coached by Tim Miles of Nebraska. The East roster features six Big East players.

Butler head coach Chris Holtmann said they got a call last week about Woods being in the all-star game, and they jumped all over it.

“It is a great honor for those guys, a lot of fun,” he said. “They are going to enjoy the weekend.”

And for good measure, here is a “Top-10” list of the best dunks in contest history. The top dunk took place at Hinkle Fieldhouse in 2006, the last time the event was held there.