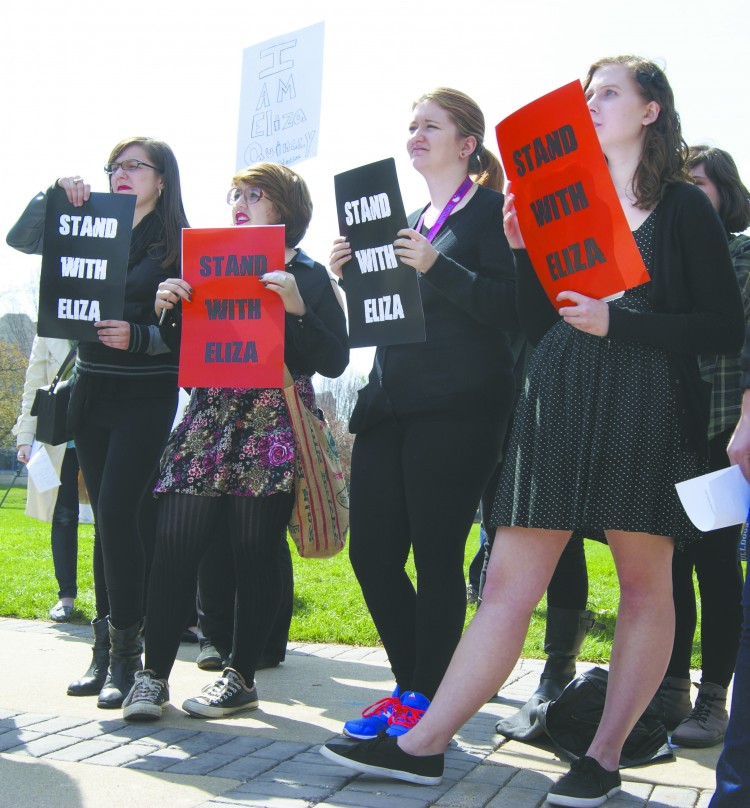 A Butler University student with the pseudonym “Eliza Quincey” posted a blog on April 11, 2014, titled “Since Everyone Thinks I’m Being ‘Too Emotional’ About My Rape, Here Are Just The Facts Of How My University Swept It Under The Rug,” detailing allegations of missteps in Butler’s handling of her Title IX investigation, as well as questions surrounding the criminal investigation process. Text in italics are the words of “Eliza” from her blog post. “Eliza” claimed she was raped Dec. 7, 2013. The Collegian asked Student Affairs leaders to confirm their knowledge of the blog post, the time frames “Eliza” mentions, and the status of “Eliza” and the perpetrator as students at Butler. Sally Click, dean of student services, said in an email she “cannot confirm or deny any aspect of any case due to federal privacy laws.”

When a student goes to the hospital after being raped, medical professionals collect a rape kit. This includes a collection of blood, urine, hair and semen. Injuries showing signs of force, such as bruises, are also documented.

I was driven to the hospital, clothes stripped off of me, one by one. Naked, under blacklight. Shivering. Cold. The SANE nurse, pried and poked at my body, taking swabs, pictures, writing notes. I put on the oversized sweatpants and underwear and walked out of the room. Six hours post rape.

You read correctly, there is no record of my case at the [sic] Prosecutor’ office. Yes, I was told that my case was presented and that there was not enough evidence to press charges. Probably because my rape kit is MIA.

According to “Eliza,” the rape kit from her medical examination went missing. While The Collegian cannot confirm the missing kit, the absence of a rape kit could mean there is no evidence to conclusively prove it was a rape.

Butler Detective Bruce Allee said it sometimes comes down to the statements of those involved.

When the accused is criminally charged, a no-contact order is issued to protect both parties. BUPD keeps in touch with the victim throughout the process to ensure his or her well-being.

Allee said one of the biggest challenges for victims is waiting through the process. He said cases can move exceptionally slowly. Sometimes, a theft case can take up to 14 months.

“The time frame can be tough,” he said. “Things don’t move quickly through court. Understandably, a person would like to have quicker closure. But with the court system, that’s just not going to be the case most times.”

However, he said the slow process is intentional.

“The slow process also tends to work as a safeguard in some ways,” he said. “A lot of times, good work is not done quickly. That goes for the prosecution side at times, as well as the other side.”

Detective Diane Sweeney said the process can sometimes seem like it is slanted in favor of the accused.

“For some victims, it seems like the process is designed to protect the defendant, and they take offense to that,” she said. “In a certain sense, it is, because it’s the state’s obligation to prove the case. But there are safeguards in there to protect both.”

Allee said the number of victims who press charges is low. He wishes that would change.

“I think people have to be held accountable for their actions,” he said. “Even with the Student Affairs and Title IX side here, there are some crimes where the people who are responsible need to be held responsible in the public courts.”

It is very unlikely for the accused to be charged in court. It must be proved in court that the accused is guilty beyond a reasonable doubt, according to Indiana state law. In the Title IX process, the victim’s story is assumed to be “more likely to have happened than not.” If the evidence supports the victim, the accused will be found responsible.

“Even when the court process might not bring the hoped-for outcome, the accused are held accountable and their behavior is made known,” he said in an email. “It doesn’t necessarily bring full closure for the survivor, but I have witnessed its positive effect on the healing process.”

Until the implementation of Butler’s new grievance policy, a Butler student wishing to file a complaint concerning a matter of sexual assault would go through the student conduct board in the same way any other matter of student conduct would.

However, this process changed after the issue of sexual assault came under a microscope on campuses across the nation. There were several incidents that caused the change in the process, including a letter from the U.S. Department of Education explaining the requirements of Title IX pertaining to sexual violence.

Click said procedures for how to handle issues of sexual assault were handled on a case-by-case basis as the issue gained traction across the nation. Butler’s civil rights equity grievance policy went into effect in January 2014.

“We’ve been in flux,” she said. “At this juncture for us, the university decided it behooves us to have one policy and one process that we’re all held to — common definitions and equity across the board.”

The policy was updated in November 2014, and approved by the board of trustees in January to further clarify definitions and policies. Click said the policy is fluid.

“It will continue to evolve as more decisions happen, as state laws change and best practices evolve,” she said.

After a Title IX report is brought to Stacie Colston Patterson, Title IX deputy coordinator for students, the accused is notified and the process begins. Both the accused and the victim are assigned advisers, whose role is to help the individuals through the process.

After remedies are put in place to protect both parties, the investigation process begins. The goal is for the investigation to be completed within 60 business days. Both parties are asked to submit names of potential witnesses. Butler’s Title IX investigator Martha Dziwlik meets with these witnesses as well.

Dziwlik conducts a second interview with both parties to confirm information. She attempts to conduct follow-up interviews with witnesses.

Dziwlik sends a report to the Title IX deputy coordinator for students with a recommendation as to whether the investigation showed the accused violated the Title IX policy.

If the investigator determines there is enough evidence to move forward, both parties are notified. Both the victim and the accused are given redacted reports — with information or evidence that is protected or classified removed. They are also told who the three members of the equity grievance panel will be and which witnesses will be called.

109 days later. Title IX hearing number one was to take place. The alleged perpetrator was not available to be present. They cancelled it.

There are numerous ways the accused and victim can participate in the hearing. They have the option of not being present or submitting a written statement that is read before the panel members. It is also possible for the hearing to take place with the parties in different rooms through phone calls or teleconferencing.

Each student makes a statement, and the members of the panel can then ask questions. Parties may also ask questions of each other or of witnesses.

After the hearing is complete, panel members meet privately to come to a decision concerning whether the accused is responsible and what proper sanctions should be. The coordinator informs both parties of this decision within seven business days.

A decision can be appealed for two reasons — additional evidence which would influence the outcome of the hearing, or evidence of a procedural error in the hearing.

120 days later. I am told that the hearing found him responsible and in violation of the University’s policy and that he was recommended to be dismissed. I guess I could consider this justice. But does it matter? No, no it does not because there was a procedural error so of course the entire hearing had to be f—ing redone … I questioned why the hearing had to be redone, and what procedural error was made. I was given vague answers. “He was not given an advisor in time.”

A third hearing was scheduled for five days later.

125 days later. It is Friday, April 11th 2014 … Needless to say, I am writing this after being denied the right to even read my speech and protest my own hearing. I was dismissed so that my rapist could be attended to according to procedure.

I am done. I am done with this politically semantic waste of what this University calls a judicial process.

However, Butler is not done dealing with the issue of sexual assault. Since “Eliza’s” blog post, Butler President James Danko announced the creation of a sexual assault commission on April 16, 2014, and members of the Butler community supported “Eliza” through a protest the next day.

The Student Government Association released a video titled “It’s On Us” Feb. 25, showing statistics about sexual assault and calling Butler students to action.

The university has hosted numerous events during the month of April, which is sexual assault awareness month.

The Butler community has yet to hear new policies and practices that have come from the sexual assault commission.

UPDATE: Danko sent an email to members of the Butler community on April 16 asking them to participate in a Butler University Community Attitudes Toward and Experiences with Sexual Assault survey.

“It is critical that we hear from as many members of our campus community as possible in order to further our understanding of the attitudes and experiences of our students, staff, and faculty,” he said in the email. “Only with the results of this confidential survey will we be able to assess the current status of our campus climate, formulate and implement our next steps, and identify changes in our climate across time.  I believe the results of this survey are an integral part of our ability to uphold Butler University’s founding principles of diversity, inclusivity, stewardship, and equality.”

A link to the survey can be found here.