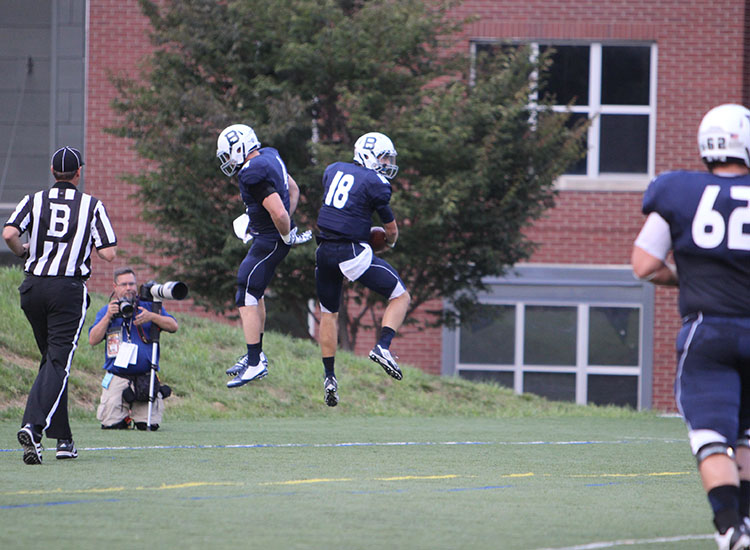 But for the Butler University football team, they are hard at work this spring preparing for the blue versus white spring game this Saturday.

In this game, the team will split into two and play each other to battle for open starting positions for the fall.

Position battles are a big part of any sport. For Butler, they have a big decision to make at the quarterback position.

Junior quarterback Matt Shiltz came into 2014 as the starting quarterback for the Bulldogs after beating out sophomore Malcom Weaver.

Shiltz played in just six games for Butler before breaking his wrist and missing the remainder of the season.

He completed 62 percent of his passes for a total of 1,324 yards last season. Shiltz racked up 10 passing touchdowns  and three rushing touchdowns.

Shiltz has had an interesting road at Butler as he first started as a quarterback in 2012, then briefly switched to defensive back in 2013.

He then wound up quarterback again when former starter Matt Lancaster graduated.

Weaver is once again competing with Shiltz for the starting job. The Evanston, Illinois native has also had a position change during his time at Butler. He started his career as a wide receiver but has had experience at quarterback as well.

Weaver filled in for Shiltz as the starter when he was injured last season. Weaver finished his 2014 campaign with 11 games played (five starts), a 47 percent completion rate for five touchdowns and 1,010 yards.

Weaver said the decision of this year’s starting position will come down to which player is the most prepared at the end of the day.

“It all comes down to who is making the right decisions in the right times,” Weaver said.

“Obviously leadership is a huge part of being a quarterback, but who can be a leader in the tough times as well ultimately will take control of our offense.”

Butler only lost seven players to graduation from their roster after the 2014 season. So on the field this Saturday, the players will have no shortage of familiar faces to tackle and compete against.

In any exhibition inter-squad game teammates put aside their friendships to compete for the number one goal — the starting job.

The spring game is going to be the only game-like action the Bulldogs will see for quite a while, which adds importance to the game.

“The spring game is obviously a real game situation which you have to make plays physically in the pocket as well as mentally,” Weaver said.

The Bulldogs last put their game jerseys on during their last home game of 2014 against the University of Dayton on November 15. Since then, Butler has had more than five months to get back in shape and in game form to be prepared for Friday. Weaver thinks that players who have made the correct decisions will be the favorites to win starting roles.

“There has been a resume that we have all put out for ourselves throughout spring camp,” Weaver said. “Overall that is what will be the deciding factor of who made the correct decisions and who puts the team in the best position to win.”