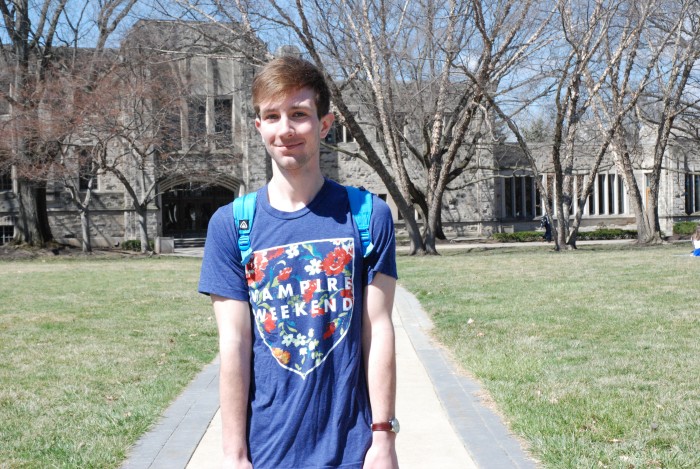 Freshman Tyler Wagner is headed to an academic advising appointment.

He is currently an English-creative writing major and Spanish minor.

Earlier this year, however, he pursued an education degree for “like, two days,” during a small existential crisis.

“I realized that I was just freaking out because I’m an English major and didn’t know where that was going to get me,” he joked.

Eventually, he ended up trusting his initial instinct and went back to creative writing.

“I want to write in some capacity,” he said. “I don’t know if I want to make it a profession just because I don’t want to prostitute myself in any way.”

In the meantime, however, he is enjoying an independent study poetry class taught by Butler University professor Alessandra Lynch.

He signed up for the class during his few days as an education major, but decided to keep it anyway after changing back to creative writing.

“It’s pretty rad,” he said. “I write two poems every week, and I send them via email to Professor Lynch. We basically do a two-person workshop, just her and I.”

Often, he said, their conversations go off onto several different tangents.

“Usually I’m late for the next thing I’m supposed to do,” he said.

Throughout his class, however, Wagner has learned some valuable pieces of writing advice from Lynch.

“I’m trying to think of something universal that will make her sound very wise,” he joked. “Personally, she has given me a lot of structural and technical advice. I have a lot of problems with pronouns.”

Apparently, Lynch has opened Wagner’s eyes to the fact that he often addresses people in his writing through pronouns rather than giving names or concrete information.

“She gets somewhat pissed about that,” he said. “Over time, it’s built up.”

Last week, she gave him a difficult assignment: Wagner was told to psychoanalyze his poetry to understand the cause of his proper-noun issues, he said.

“I know this sounds intimidating, but you have to do it,” she told him. “You have to get to the bottom of why you’re doing this because it needs to stop. You need to psychoanalyze your poetry in a two-page response.”

At this point, Wagner is still looking for answers.

“I know it is probably going to lead to some Freudian mom-dad issues or something. Something scary,” he joked. “I hope that’s not where it leads. Maybe it’s just lack of care or precision. So that’s not really advice, but she tells me that.”