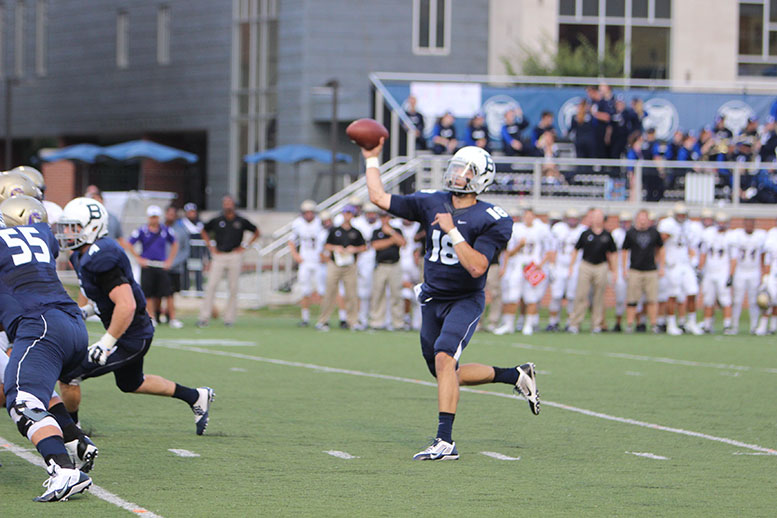 Perhaps one of the most entertaining competitions in sports is the position battle for starting quarterback on a football team.

Sports fans have seen great quarterback battles in the past few years, such as in the San Francisco 49ers between Alex Smith and Colin Kaepernick, and the one coming up this summer at Ohio State University between Braxton Miller, J.T. Barrett and Cardale Jones.

The Butler University football team is joining the list of teams with a quarterback competition as the spring season has come to an end. For the Bulldogs, it is between Matt Shiltz and Malcolm Weaver.

Both quarterbacks are returning after splitting action at the starting position last year during the Bulldogs’ 4-7 season.

Weaver started the final five games after Shiltz went down with a broken wrist in a loss to Campbell University. Even though Shiltz has not played a real game since the fall, he is the right man for the job for head coach Jeff Voris.

The six-foot-two Shiltz saw his first full-time action as quarterback last season for Butler. He came back under center after playing 11 games as a defensive back for the Bulldogs in 2013.

Shiltz had no problem being put into a high pressure situation last year while playing six games as quarterback, totaling 1,324 yards and 10 touchdowns.

For Butler to succeed in the very physical Pioneer Football League, the teams themselves need to be physical.

Butler is facing talented competition every game which makes it even more necessary to have a dual-threat quarterback who can change the complexity of the game at any moment.

Senior quarterback Matt Lancaster was this type of player for Butler in 2013 when he led them to the Pioneer League Championship and the league’s first ever appearance in the Football Championship Subdivision playoffs.

Shiltz is able to combine read-option plays and a very powerful arm. In a game against Taylor University last September, Shiltz completed 80 percent of his passes for 347 yards and rushed for 86 yards.

How does this compare to Weaver? Weaver is a very similar quarterback. He can be a threat from on the ground and in the air. But the one thing that puts Shiltz over the top is his size and strength.

Weaver is able to use his strength as well, but he started his college career as a wide receiver and has done well in Butler’s system in that position. Shiltz has three inches and 15 pounds on, but remains just as big of a dual-threat, if not bigger.

If Shiltz is the starter, Weaver will be able to stay in the starting lineup as wide-receiver. If this happens, Voris will be able to run trick plays, whereas Shiltz could hand the ball to Weaver on a reverse play, and Weaver could throw the ball to another wide receiver.

No matter who starts for Butler, the Bulldogs will have reliability on the bench for a backup in case another injury happens. Weaver will be able to walk right in and hold the reigns like he did last year. Then the Bulldogs also have sophomore Will Marty, who will likely be third string in the fall. Marty is six-foot-four and from Wyoming, Ohio.

The PFL is full of athletes who are equally capable of taking Butler to the limit. Butler’s biggest success comes when they have a quarterback who can be a threat from both ways of offense.

If Shiltz can run for 50 yards a game on the ground, and throw a few touchdown passes alongside that, Butler can expect to be in very good position next year to contend for another championship.