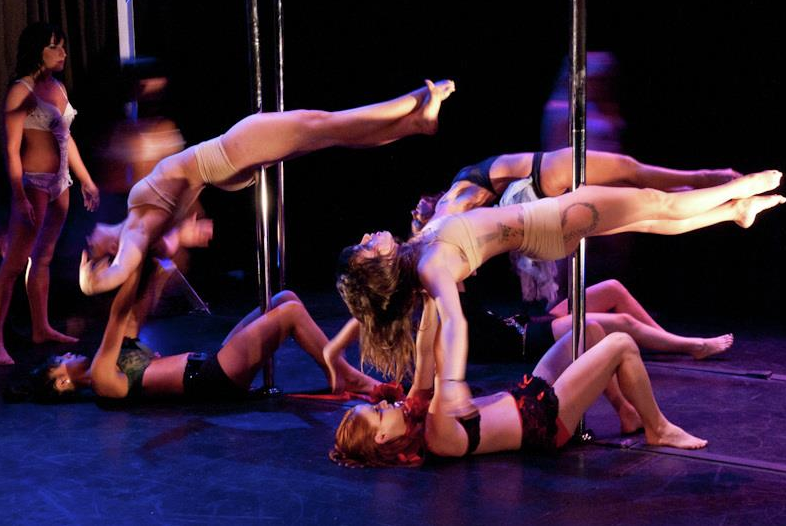 The lights came up to reveal a nearly empty stage, with the exception of a large metal structure and three poles.  Performers in Jagged showcased a captivating performance that combined modern lyrical and pole dance and shifted the initial sentiment of the audience.

Students and members of the community witnessed Jagged, a dance company out to redefine the way the dancing world perceives pole dancing.  Jagged is a modern dance company working to change the negative stigma associated with pole dancing to one of positivity.

Jagged focuses on educating people about the beauty of pole dancing as an artistic expression. Through dedicated rehearsals and breathtaking performances, Jagged creates storylines, costumes and performances involving floor and aerial work by the dancers.

This is the focus of the documentary “Off the Floor” by co-directors Matthew and Katherine Celia.

“Off The Floor” was screened prior to Jagged’s live performance as part of Butler’s ArtsFest.

Performer Jessica Anderson-Gwin is determined to make the dancing world aware of her message. She said she believes pole dancing should be seen for its artistic and expressive form, far from the stigma society has placed on pole dancing: one of strip clubs and distasteful movements.

Viewers saw each high and low of the dance company and followed its mission.

The live performance following the screening of the documentary displayed Jagged’s unique combination of pole and modern dance styles. The six dancers wowed the audience with their incredible pole stunts. It was an incredible performance, speaking to both Anderson-Gwin’s and Jagged’s message as well as what a human body can be capable of. As dancers contorted their bodies around the poles, at times with five dancers on one pole, the audience marveled, often bursting into applause during more challenging moves.

“I was impressed by their dedication to what they like doing,” sophomore Riley Hill-Kartel said. “They want to change the stigma.”

The performance engaged the audience with a question-and-answer session after the show. During this time, the co-directors and dancers of “Off The Floor” were present, providing their insight.

As stated during the question-and-answer session, the full length documentary is available on www.offthefloormovie.com.

Butler’s ArtsFest will continue to present opportunities to be exposed to such art forms throughout its 2015 season. Through performances such as Jagged’s, students and community members are pushed to explore art forms they would not typically experience or be exposed to.  For more information, visit http://butlerartsfest.com.