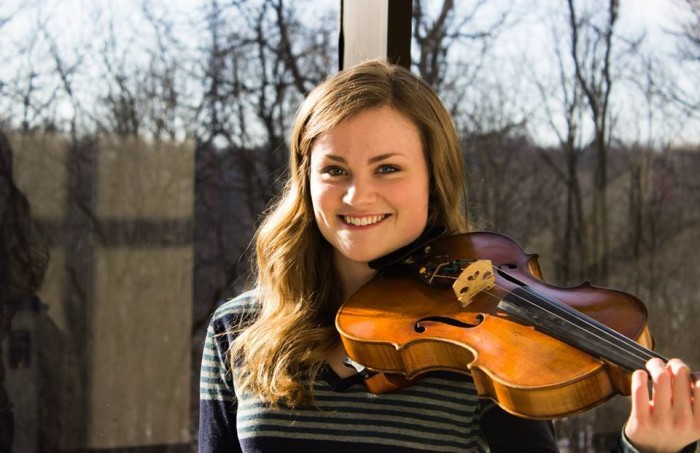 One of the first things to notice about sophomore Addie Funderburg is her Tennessee accent.

The second is that she is just about the sweetest person you will ever meet.

But behind the girl-next-door personality is a passionate musician.

Funderburg began playing the violin when she was just 5 years old.

A few years later, she realized she really loved the deep and darker tones of the viola.

She was talented enough to spend her summers at the prestigious Interlochen Arts Camp in Michigan.

Funderburg came to Butler University as a music education major.

Soon, she realized she enjoyed practicing and playing enough that she wanted to change her major to viola performance.

Funderburg said she took note of the struggles of being a performance major early on.

“I was always second-guessing myself,” Funderburg said. “In other majors, you need to get the grades and you can make it. In music, you can be a great player and still not make it.”

Funderburg finds herself in the Lilly Hall practice rooms on a daily basis.

Ideally, she said she wants to be in a chamber music group and orchestra.

“My dream is to be in a chamber group and travel,” Funderburg said. “Or be in a fun band like Mumford and Sons.”

Funderburg has recently been preparing for her first solo recital.

Because of this, she prepares differently from how she has in the past.

“I focused on looking at the bigger picture,” Funderburg said. “Usually, I look at one page at a time.”

Funderburg believes that the contrast in the music will keep listeners engaged.

“The Brahms is more romantic and serious, the Vaughan Williams is happier and more fun,” Funderburg said.

Funderburg’s program will consist of Bach’s Suite No. 3, Vaughan Williams’ “Suite for Viola and Orchestra” and the Brahms Sonata in F minor for viola.