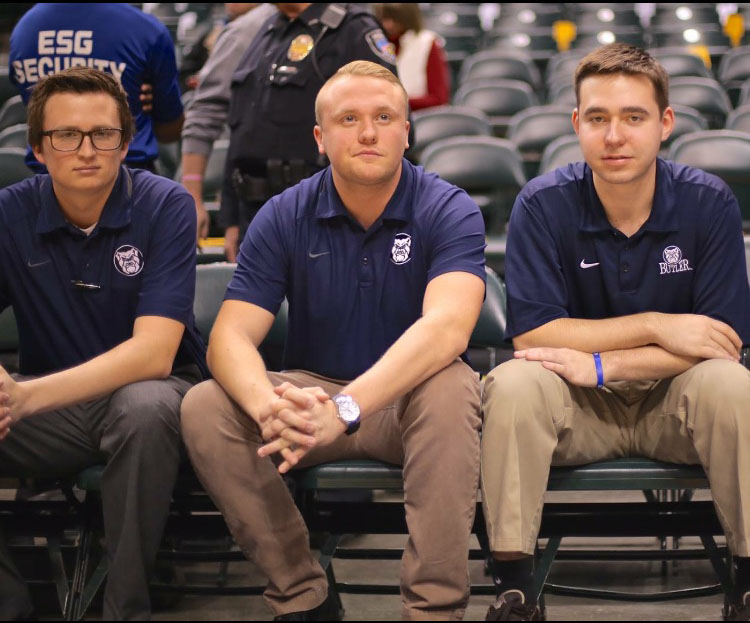 The Butler men’s basketball team surprised many when it played its way into the NCAA Tournament this season. Names such as Barlow and Dunham became commonplace in the heads and the hearts of all Butler fans.

Behind the scenes, along with the players and coaches, are the managers of the basketball team. There are 10 of them, and each one plays a role in how Butler basketball is perceived by the Butler community and beyond.

Junior Kellen Dunham said although they may not get the attention surrounding the team, they are still appreciated by the team.

“I feel like they do not get a lot of attention, but every person on our staff appreciates their help, immensely,” Dunham said.

Junior Christian Murphy has been a manager since his freshman year at Butler. Murphy said that even at practice the managers have certain responsibilities they are in charge of.

“We make sure all the equipment is set up for practice like the clock, balls, towels, water and Gatorade,” Murphy said. “We also film the majority of our practices of the coaches.”

Other duties include running the clock during drills, rebounding for the team and making sure the players and coaches always have what they need for practice to run as smoothly as possible.

Dunham said he likes the enthusiasm the managers bring each practice.

“They are a huge impact on our team,” he said. “They have great attitudes and they are always excited for practice.”

Sophomore Matthew Qualters has been a basketball manager for the past year and a half. He said the managers’ game day starts long before the opening tip-off.

“A typical game day, we are there two to two-and-a-half hours before the game starts,” Qualters said. “When we get there, we have to help set up any chairs, we get the stools out for timeouts, and anything else that needs to be done.”

On top of all the setup that has to take place, Qualters said the managers do what they can to make sure the visiting team is comfortable heading into the game.

“Just checking in with the other teams is one of the biggest things, and making sure there is nothing that they need done,” Qualters said. “And making sure that while they are at Butler they’re being taken care of as best as they can be.”

Qualters said he and the managers were with the team during Selection Sunday and also helped the team prepare for the Texas game.

“As soon as they announced who we were playing, we started breaking down film for all the coaches,” he said.

Even though the season ended in Pittsburgh with a 67-64 loss in overtime to Notre Dame in the Round of 32, the managers still have commitments to the team.

Murphy said during the offseason the managers continue to aid the players and coaches when they can.

“We still work during the offseason,” Murphy said. “Players have individual workouts with coaches, so we rebound. We just make sure we do anything we can to make things easier for the players and coaches and are available to help whenever we can.”

Dunham said that he has enjoyed his time around the managers.

(Photo by Mike Andrews) Junior Kelen Dunham led the Bulldogs with 16.5 points per game this season.

“I love the managers, and I try to enjoy every moment I possibly can with them,” Dunham said. “They make my life so much easier and I appreciate the memories they have created in my mind.”

Murphy said he has benefitted a lot from being a manager.

“It has been a superb experience and given me many opportunities,” he said. “I have learned so much from being a manager, and from the coaches and players.”

Qualters also said being a basketball manager has been worth all of the time and effort.

“It’s a lot of work, it’s a lot of time,” Qualters said. “But it’s extremely worth it at the end of the day. There’s nothing better than it. I really enjoy it.”