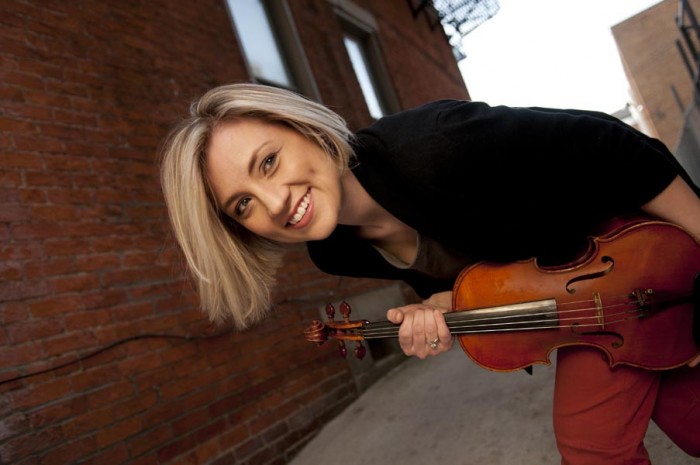 Graduate student Meghan Lyons King grew up in a family of music.

Her aunt, uncle, grandmother and cousins all studied the violin. King’s aunt and uncle even studied with the same teacher as Joshua Bell.

King’s mother, a flutist, led her to choose a musical path.

“It was my mom’s dream and passion to do music,” King said. “So it carried on to me.”

However, King did not realize that music was also her dream until she was in seventh grade.

When King was 11 , she decided that she was going to pursue music. She realized at this point that it was what made her happy.

King’s brother also played cello. This was when King then realized her love for teaching and helping others grow musically. She would help her brother practice the cello, and from then on she knew she wanted to be a teacher.

She started her own violin studio called Appassionato Strings, where her students perform semi-annual concerts.

As a teacher, King writes lyrics to her students’ songs to better help them memorize the music.

She even puts up instructional videos on YouTube to help her students learn from home.

King requires her students to attend concerts to encourage them to work hard and achieve their dreams.

Her studio is meticulously organized, down to every last bag of holiday stickers given out to students.

King’s love for music is reflected not only through her teaching, but also her playing.

Kim Busic is in the same studio as King and has seen her perform in studio and master classes each semester.

“When I hear Meghan play, I can’t help but smile,” Busic said. “You can tell she loves to play and give life to the music.”

King said she has always aimed to give a heartfelt performance when she is on stage.

“I’ve always had the emphasis on the musical, the romantic,” she said. “I focus on tone and expression. I think part of my music making is showing expression through my body movement or my face.”

King said she attempted to perfect her musicality through outward expression.

Part of that is channeling her emotions and putting them toward the music.

“My biggest life event while getting my music degrees was getting married after my junior year,” King said. “My biggest struggle was balancing the married life with my practicing.”

King is now in her second year as a master’s student at Butler University.

“There is an interesting expectation for the way the world is moving for musicians  or artists to find their niche,” King said. “We must make something of ourselves and identify ourselves. We must find a group to associate with, and that sometimes limits what the musician really wants to do.”

Before coming to Butler, King said, she had a difficult time finding her own niche.

“I found my close friends here,” she said.

King’s master’s recital program will consist of the Bach E-major Partita (which she likes to think of as a “fiddle tune”), the Mozart B-flat Sonata, the second and third movements of the Sibelius Violin Concerto, and finally the Wieniawski Polonaise.

“I’m excited that I get to put on a recital program and that I have that opportunity to share with other people this gift of music,” King said. “I want to instill love and appreciation for music that shows in all areas of life. I’m an advocate for music in general.”

King will give her recital April 24 at 8 p.m. in Eidson-Duckwall Recital Hall.