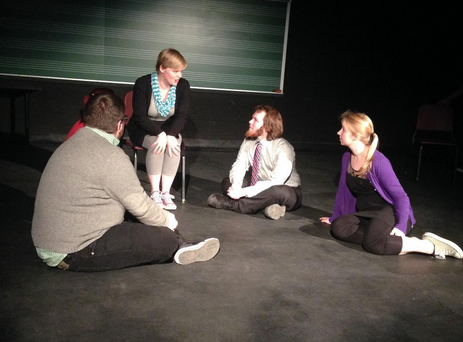 She used the production not only to entertain audiences, but also to make several commentaries about life at Butler University.

“It has been a collaborative effort,” Hosack said. “We started with a huge brainstorm and developed ideas over time.”

Hosack said seeing her ideas come to life onstage has been exciting.

She began the tour by singing about how Butler is the happiest place on Earth.

One of the prospective students asked for food recommendations.

In response, the tour guide suggested Atherton and Campus Club.

“I said, are there any good places to eat around here?” the prospective student joked.

“Hashtag Improv Hashtag Comedy” gave insight to Hosack’s views about Butler and her sense of humor.

Freshman actress Lexy Weixel said it was interesting getting to know Hosack through her comedic style and her writing.

“It made the whole thing more relevant to us personally,” she said.

Each of these names were meant to be plays on current popular culture names.

“My favorite role is playing a frat bro,” Hunt said. “It really comments on Butler life and gives perspective.”

After the scripted half of the show, the actors played improvisation games based on audience suggestions.

In a game called “foursquare,” four actors rotated scenes that the audience suggested.

In another called “ding,” the actors had to rephrase a statement each time they heard a ding from a piano.

The audience members were not the only ones who enjoyed the improv games.

“Improv is just honest reactions to what people say,” said sophomore Nick Gehrich. “It makes the show new and different every night.”

The audience played an active role in the production, suggesting topics for improvised scenes and feeding the actors’ energy with their reactions.

The actors and actresses drew countless laughs out of the audience, and the show spoke volumes toward the quality of student-driven production at Butler.