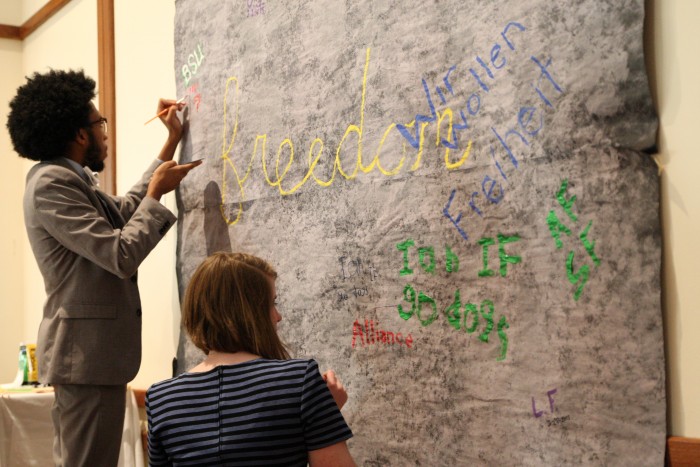 The International Club commemorated the fall of the Berlin Wall Saturday with its Fall of the Wall Ball.

“We thought, since it is our 25th annual dinner and the 25th anniversary of the fall, it would be a perfect theme,” said Alexandria Johnson, president of the International Club.

“It was very nice,” student Andrea Muñoz said.  “The food was very delicious, I loved the chocolate cake!”

After dinner, two guest speakers described their connections to the Berlin Wall.

The first speaker was business professor Bob Bennett, who studied abroad in East Germany in college.

He started his speech with background information on post-war Germany and the wall.

“Germany really grew up and formed two different cultures because of the wall,” Bennett said.

He then told stories about his time spent in East Germany between 1976 through 1977.

“It was drastically different from the West.  Bleak, drab and shabby,” he remembered.  “We saw an awful lot of humorless people with machine guns.”

At the end of his speech, he introduced the next speaker, Karl Stelzner.

Stelzner is an exchange student from the University of Dortmund, Germany.  He shared his thoughts about living in a post-wall Germany.

“It was a victory of common sense against the madness,” Stelzner said.

The dinner also included an interactive “Berlin Wall” where guests wrote messages and posed for pictures.

Johnson said she wants to thank the International Club’s executive board for its hard work putting the event together.

“We had great food, a great turnout and great speakers,” she said.  “Knowing we put the event together successfully was definitely rewarding.”