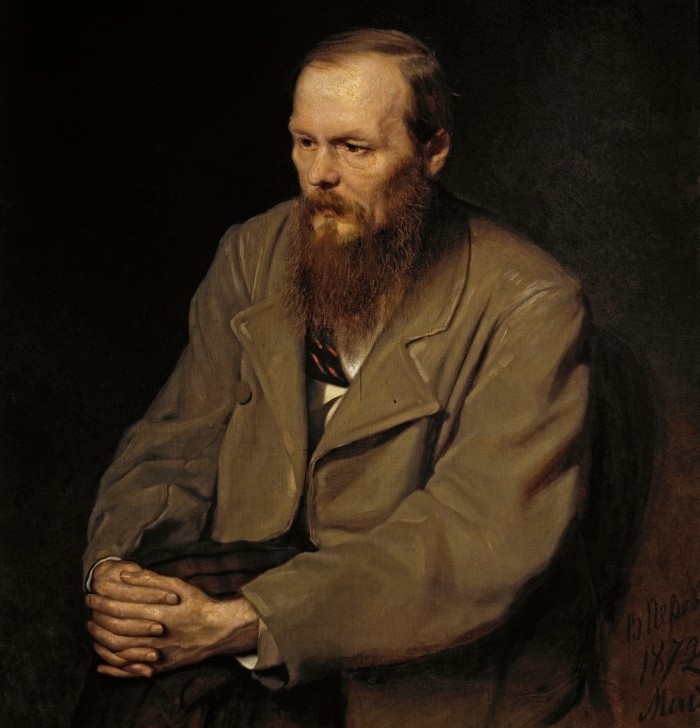 As one enters the dimly lit blackbox theatre, one finds a stage floored with wooden planks sandwiched between two areas for seating. On the far end of the stage is a staircase that leads to nowhere and two chairs hung on the wall beside it, as if floating.

One can already see the impressionistic quality of the upcoming production.

In case there were any doubts, Elaina Artemiev’s play “Crime and Punishment” begins with a dream sequence retelling the beginning aspects of the story that could not be included within a 90-minute theatrical compression.

Sergey Sergiev’s choreography certainly captured the specific mood right away, but those who had not previously been in contact with the novel may be a little fuzzy on details going in.

Just be open, all of the pieces come together. Generally.

Aside from a song played for two seconds before the production began, and aside from the fact that the transitions of lights were occasionally delayed, and aside from rose petals that clearly missed the center spotlight they were aiming at, all technical aspects came together with ease.

Everything was largely impressionistic, from mostly accurate costumes that flowed more than usual, to the aforementioned set, to dreamy and flowing lights that adequately conveyed what was imaginary and what was legitimate as we navigated through Raskolnikov’s conscience.

But let us backtrack a moment. What was this thing about, anyway?

In a word, morality.

Raskolnikov, played by Taylor Galloway, writes an article alluding to the theory that the truly extraordinary may have a need to occasionally step over moral and legal limitations.

To test this theory, he decides to kill an old pawnbroker, and ends up killing her sister as well.

Wading through various relationships, a somewhat foppish detective and his own guilt, Raskolnikov must come to some conclusion about his theory, about his experiment and about himself.

Overall, I understood the story even without the plot summary in the program and without having read the novel prior.

This production even stirred several emotions in me.

One subplot, the love between Raskolnikov’s sister and his friend (portrayed by real-life couple Tamara Bodnar and Zach Heider), almost brought a tear when displayed through Sergiev’s dance.

The way Jeff Bird portrayed the somewhat outlandish-but-deceptively-astute-and-powerful detective Porfiry made me lean in closer to the stage.

In all, the actors were incredibly engaging and enticing for the first half of the production.

The problem of believability is two-fold.

On the one hand, I did not feel the rise in emotional stake that is necessary for me to believe that any of this story matters to these characters.

Most everyone was static, which made me wonder why on Earth anyone would befriend Raskolnikov in the first place.

True, the character was always meant to be an anti-hero. However, this almost constantly brooding rendition, broken only by bursts of emotions so sudden that one might point the man to a psychiatric ward, did not lend me to believe anyone but a spineless pushover would offer to help him in any way, much less offer to help serve penalties for a crime she did not commit.

The second problem is more clearly a matter of priorities in the director.

Several of the actors were caught on one bad habit or another when they were on stage.

Heider was by far the most vibrant and dynamic character onstage. His disappearance from the story coincidentally (or not) brought about the ill-turn of the production.

However, he had not been instructed to keep his eyes from flashing to the audience, even though he was clearly supposed to be speaking to a fellow actor on stage.

Galloway had three habits that needed only be pointed out for a much more believable performance.

Firstly, his resting position was crossed arms with a slouch, bent knees, a jutted chin and a pout.

This brought to mind more a caricature of a rebellious, modern American teenager than of a fully dimensional man whom people love and respect.

Secondly, Galloway often did a sort of do-se-do with himself during outbursts, taking a step forward, two steps back and then three steps forward again.

Likewise, Bird often had trouble planting his feet, although this manifested more in pacing that seemed inspired by nothing but theatricality.

The third one often happened at the same time of the first, and was something that old Danish prince had warned us about years and years ago: “Do not saw the air too much with your hand.”

Again, to make it clear, I do not blame actors for these unbroken habits.

The director’s job is precisely to point out these easily fixed mistakes and address them before an audience sees them.

I realize my criticisms may seem nitpicky, but the attention of all these details can make me believe main characters or the action of the plot.

When a man who has another in the palm of his hand and toys with him suddenly dispels “You are the murderer!” with a whimper in his tone, one is taken aback.

When a devoutly and well-established soft soul hears the confession of murder and does not appear to process surprise, it leads to other questions. Did she already suspect? Why does she care about him so much? What are Raskolnikov’s good qualities that these other characters see?

True, compressing it all within a narrow timeframe would be difficult for anyone, but the beginning half of the play brilliantly established everything and had me on the edge of my chair.

The latter half continually confused me as portrayals felt either inconsistent or static.

I began to suspect that the stronger actors were perhaps placed in supporting roles and in subplots never quite revisited.

Peyton Lustig, for example, played a character by the name of Katerina, who early on gives a lengthy soliloquy to the audience detailing her life and situation.

In this rendering of the play, the only connection this vaguely has to anything is the fact that she is Sonya’s (Evie Davis) friend and related to the murdered woman.

However, her history never returns to affect the plot.

Her entire character does not seem to contribute to anything in this cutting of the story.

So why is she there and why is her somewhat rushed emotional purging necessary when I still do not quite understand the motivations of characters more directly linked to the plot?

We return to this character only through a dance with a chair. While beautiful and painful, I do not understand the emotional arch or the story.

Similarly, I mentioned previously a dance detailing a romantic subplot, yet I did not catch how that story truly wraps up.

This version of the story leaves loose ends and leaves doubts in the main plot as well.

Despite its many problems, I do recommend seeing this production. It is my favorite of the Butler season.

Intellectual and moral questions explored through vivid yet still relatable characters, all tied into a world that is visibly appealing.

Even though the details that could be improved, at the heart, you have the essence of one of the greatest novels.

On Friday’s performance, the Collegian’s Tyler Springer will be live-tweeting an alternate view of the production. Follow him at @tspring22 and keep your eye on your Twitter feed April 17.