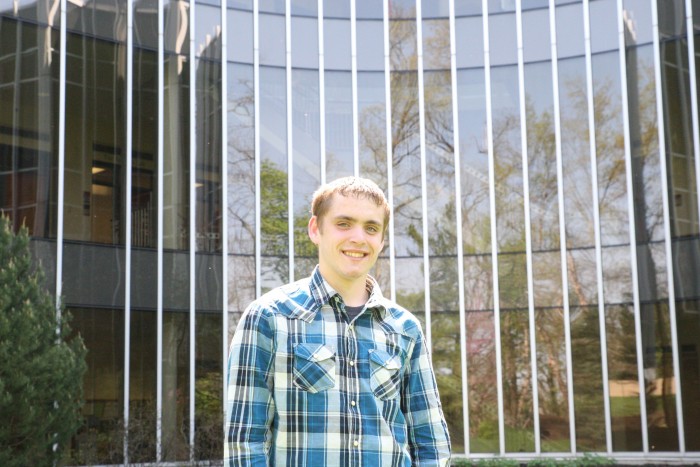 The Butler Collegian’s next leader brings two years of Collegian editing experience, a passion for investigative journalism and a clear vision for the next episode of college news media.

Matthew VanTryon, who served as the newspaper’s managing editor this semester, was chosen April 17 as the Collegian’s next editor-in-chief by a selection committee.

VanTryon, a sophomore journalism major, said he is excited to lead a staff of student reporters, editors and visual artists as they hone their journalism skills.

“It’s really kind of surreal. I’ve been on staff for the past four semesters and if you had told me when I started that I’d been in this position today, I would have said that you were crazy,” he said. “But being on The Collegian has been by far the best experience I have had in college, and I am very honored to be selected.”

VanTryon has won numerous awards for The Collegian in regional and statewide contests this academic year, including awards for his sports reporting on the controversy surrounding former women’s basketball coach Beth Couture.

Furthermore, the personal accolades give him the foundation to continue his recent string of investigative reporting. He wrote a number of stories about sexual assault initiatives this semester, an issue that continues to affect Butler University.

“It’s one thing to write a story about a basketball game,” he said. “It’s another to write about something so in-depth. When you cover issues like sexual assault, and I also think about the story I did about the Religious Freedom Restoration Act, you have to go in prepared, so I look at those as signs that I am ready for this position.”

VanTryon said he wants to expand The Collegian’s area of coverage, including more reporting on campus clubs, Jordan College of the Arts programs and professor and student profiles.

VanTryon said The Collegian’s use of social media, the website and videos can be revamped and improved for the fall 2015 semester.

This semester, the newspaper averaged a total of 4,500 page views each week on the Collegian’s website, according to Google Analytics, with a peak of 6,135 page views during the week of Feb. 26 to Mar. 4. There are approximately 4,126 students at Butler University.

That week, news broke that Katelyn Sussli would be elected as the next Student Government Association president, and VanTryon wrote a story that highlighted issues related to grade inflation on college campuses.

On March 4, the newspaper also had the first of three front pages dedicated to the issue of sexual assault, with the feature story “Butler battles sexual assault” as well as “Research shows flaws with ‘one in five’ sexual assault statistic.”

But the content that saw the most views at that time was one of The Collegian’s parody videos titled “Butler syndrome.” The video, with footage shot by staff reporter Tyler Springer, highlighted common traits the student body share, including “the struggles to climb the steps of Jordan Hall,” “binge-watching Netflix” and “registering for classes.”

VanTryon said he wants to see growth in the use of videos to support major news, sports and culture stories.

Sophomore Cameron Alford, co-assistant culture editor, spent his first semester on The Collegian this spring and he said he wants to see more creative content from the newspaper, along with maintaining a diverse array of stories.

“The content of the stories were definitely stronger this year,” Alford said. “I think that speaks to the talent of the folks on The Collegian.

“With the YouTube videos, we really set ourselves apart from other news publications, but we also put ourselves in a position to develop something more. Now that we’re moving towards that marketing aspect of making sure people actually read the stories, it gave people a chance to see what was going on at Butler.”

Junior Moe Simmons, a first-year news reporter, also said he enjoyed The Collegian’s videos this year. He said that the news stories had a wider range of topics.

Simmons wrote three front-page articles, one about campus construction, the second about the SGA presidential election and another about Founder’s Week.

“I loved the section I worked in,” Simmons said. “I feel like we did a lot of controversial pieces but we also did a lot of fun pieces.”

In addition to his work with the news staff early in the semester, Simmons contributed to the growing video department that focused on reaching out to the student body while also entertaining other members of the Butler community including faculty, staff and the administration.

“I remember Sally Click [dean of student services], came up to me one day and said, ‘You did a great job with the video for The Collegian,’ and she’s an administrator,” Simmons said. “So, yes, we can report on the serious things like the money and the budget and the layoffs, but we also have a good entertainment side, because together, all of this is better.”

As for areas of improvement, VanTryon agrees with Alford and Simmons that communication among staff members can be increased. With more collaboration, stories can become more in-depth, investigative and impactful.

“The main thing I am looking for is growth,” he said. “That sounds simple, but I think that if we grow each week as a staff and as individuals, we are doing our jobs.

“I’m really excited about this,” VanTryon said. “We have a very important job on campus and I want to do things at a high quality while also reaching as many people as possible.”