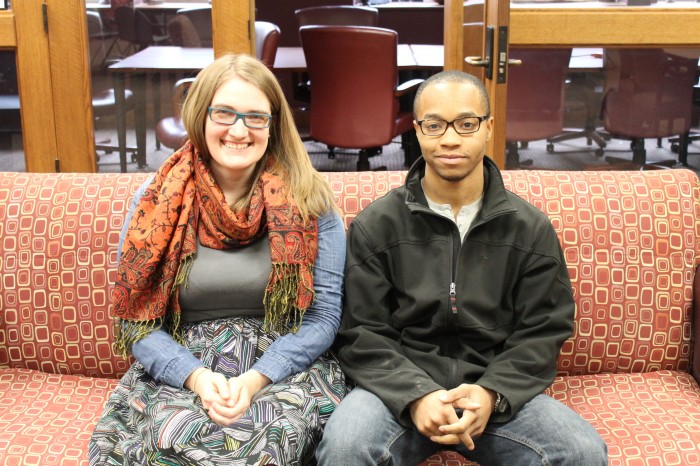 Beccah Rendall and Brandon Williams are two servant leaders who deserve to be recognized as champions of diversity, said Valerie Davidson, director of diversity programs at Butler University.

Rendall is a senior political science, religion, and peace and conflict studies major at Butler University.

She has been involved with many diversity organizations on campus such as the R.E.A.C.H. board and the Center for Faith and Vocation.

She served as co-chair on the R.E.A.C.H. board of the race and spirituality committee.

In that role she helped plan an interfaith prayer that brought people together and promoted peace in the midst of conflict.

Rendall said focusing on conflict management, as it relates to religion and spirituality, is something she holds close to her heart.

“There is something about religion and spirituality that brings people together in a way that otherwise would not happen,” she said.

Brandon Williams said he seeks to educate students about different elements of diversity.

Williams, a senior mechanical engineering and economics major, has also been involved with the R.E.A.C.H. board, and has served as vice president of diversity programming.

As vice president, he was a part of making R.E.A.C.H.’s monthly Taste of Diversity event a unique signature to the board’s identity.

However, before he joined the board in his junior year, he had no intention of applying.

At the time, a fellow student named UnoBlessed Coons encouraged him to apply.

During his application process, questions inquiring how he could promote diversity helped him establish his definition and the value he could bring to the R.E.A.C.H. board and Butler.

“I feel like we need to embrace what we already have in order to move forward,” he said.

Jen Agnew, associate director for Butler’s programs for leadership and service education, said both Rendall and Williams are great advocates for diversity.

Agnew also said they both work very hard to educate students about different ways to look at diversity.

Williams said when he hears the administration discuss the subject, it is strictly racial.

“I don’t think that is a very accurate depiction of what diversity is,” he said. “We have all of these diversity initiatives, but we have failed to define diversity as individuals.”

Instead, the two try to focus on finding similarities.

“There are so many things that divide us in this world, but to find something that unites us is truly amazing,” Rendall said.