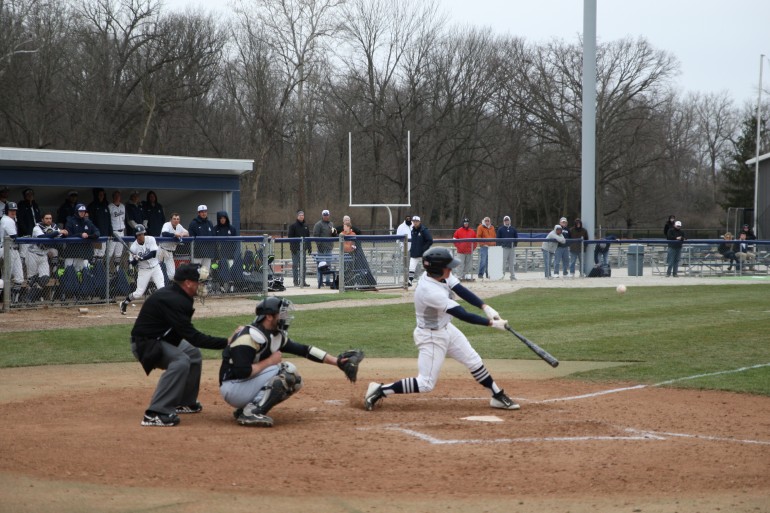 With no prior baseball history in his family, his dad a golfer and boogie boarder from California, and his mom a gymnast at the University of Arizona, Drew Small found his way into the starting lineup as the left fielder of the Butler University baseball team.

Small, a Zionsville, Indiana native, began playing baseball when he was 6 years old. His longtime love for the sport began when he started playing when his friends encouraged him.

He had the opportunity to play for numerous teams throughout his career and compete for championships. At Zionsville High School, Small led the Eagles to a 28-6 record and he was named all-conference his senior year. He said his favorite baseball moment came while he was playing for Zionsville.

“During high school, making the run that we did during my senior year was my favorite moment,” Small said. “The guys that I was with like Troy Kuhn who plays at Ohio State (University) now and the other guys on that team made us a pretty stacked team and we made it pretty far while beating some good teams.”

Sophomore Drew Small comes across the plate during a 7-5 loss against St. John’s University at Victory Field in downtown Indianapolis. (Photo by Mike Andrews)

Living so close to Butler has proved to be a sign for Small as to why he came to Butler. He visited Butler a few times as a kid and even attended a basketball camp when he was younger. He said during that time one of his sports careers ended and one was just beginning.

Small said that after the basketball camp he stopped playing basketball. This gave him more of an opportunity to play baseball.

Small first realized he had the potential to play college baseball when he was 13. He began playing for the Indiana Bulls, a travel baseball team in the state of Indiana. He said he made the team after being suggested to try out from a friend.

A lot of pieces to the puzzle needed to be figured out between when he was 13 and 18, however.

During his sophomore year of high school, he began to face injury problems. During this time he also had to make a position change based off of his injury.

“I was only a shortstop for my whole life,” Small said. “And I had shoulder surgery after my sophomore year of high school. I didn’t have the surgery until sometime in the late fall. Then high school baseball started up in March. It wasn’t really an option to get back to playing shortstop so they threw me in the outfield so I wouldn’t have to throw the ball a whole lot.”

After his shoulder healed, Small was ready to make the next step to the recruiting process.

Small has played in all 30 Butler games this season and is hitting at .298.

With his mom being a Division I athlete from Arizona, Small had a good idea of what it was going to be like. He said his mom gave him some advice he would never forget when he was picking a school.

Small said he first got the call from Butler and head coach Steve Farley when he was 17 years old. Butler’s academic side was really what drew him to playing for the Bulldogs.

“It is a great school, first off,” he said. “And on my visit I just felt a connection with the guys and the coaches.”

During Small’s freshman year, he had no problem transitioning to college baseball.

Senior Michael Fries said that he had an opportunity to form a special bond with Small.

“Being an older guy, you are always trying to help the new players out, whether it is with class or daily life here at Butler,” Fries said. “Drew was a pretty polished player coming out of high school. He came and hit the ground running. I’ve learned a lot from him and he has learned a lot from me.”

Small also made some adjustments to his game during his freshman year as well.

A big thing for any baseball player is to develop their own unique batting stance. Small has developed a batting stance where he keeps his feet far apart and holds his bat near his belt.

An advantage for a baseball player in this type of stance is to keep loose and get off quick swings. Small said his changed from the course of high school to college.

“I did something my freshman year here to change it,” he said. “I have stuck with it and it has worked for me. It helps me stay level and hit more line drives. In high school I kept my hands up high and had a narrow stance.”

Injuries became a problem for Small during his freshman and sophomore years. Fries said it was a big blow to the team not having Small in the lineup after a season-ending injury last year.

“He is a great teammate and great guy to have in the locker room. He keeps the guys loose as a jokester and likes to have a good time. It was a big loss to see him go down and have a season-ending injury like he did,” Fries said.

But Small has not given up. He has worked hard to get back into the position he is in now. A junior academically but a redshirt-sophomore athletically, Small is batting .298 with 19 runs-batted-in and eight stolen bases 30 games into the season.

Fries said it is a game-changer to have Small back into the lineup and healthy so far this season.

“He’s really a guy that gets us going offensively,” he said. “It has really helped our team having Drew. He is going to be in the lineup every day while he is here. He can help and impact the game in so many ways.”

Fries said that Small’s biggest baseball strength comes from his approach of the game of baseball. Fries said he makes things happen.

“He can hit for average and power, too, for being a little guy,” he said. “He has done a great job as being the table setter at the top of our lineup this year. He is the guy that sets the tone for the team, and that is his biggest strength”

Being from Zionsville, Small does not have a particular MLB baseball team to root for. So he said that he prefers to watch his favorite players, rather than just a team. Small’s favorite player is Yasiel Puig from the Los Angeles Dodgers.

“Puig’s enthusiasm is so fun to watch,” Small said. “He plays the game fast and hard so he is really fun to watch.”

Small and Puig share many different similarities. They both hit for a solid batting average and both can consistently steal bases. They also both play very quick and scrappy in the outfield.

Before every pitch, Small makes sure to shuffle his feet and keep moving playing left field in order to be ready for any ball that may come his way.

Small makes sure he is putting himself in the situation to play his best every day. Because of this, he is not holding back the thought of playing baseball after college.

Usually, players that miss significant time during their college career will doubt the fact that they can keep playing. For Small, it is motivation.

“I always want to play baseball after college. That will always be the focus I have when I put my work in,” Small said. “I don’t want to sell myself short and tell myself I can’t do something. So I will always expect that to happen and go from there.”

The Bulldogs play at the University of Dayton today.

They then continue their road trip with three games at West Virginia University, and one at Ball State University.

Butler resumes Big East play with a three-game stint at Seton Hall to wrap up the trip.

It then returns home again on April 21 for an eight-game home-stand that starts with a game against Northern Kentucky University.

Following that game, the Bulldogs have just two non-conference games left on the schedule. They are currently 0-3 in the Big East, sitting a game behind fourth place Georgetown. The top four teams qualify for the conference tournament May 21-24 at TD Ameritrade Park in Omaha, Nebraska.