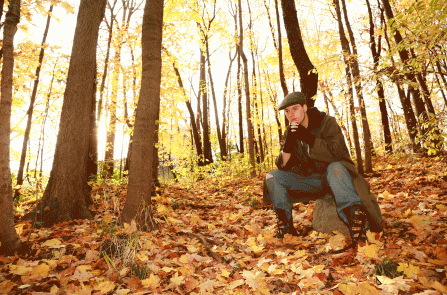 In the Black Box Theatre of Lilly Hall, a hush comes over the audience.

There is no curtain to be drawn for this stage, but all the same a show is about to begin.

Far from being a straight adaptation, this stage version incorporates dance and music into its dramatization of a story of guilt and redemption.

After a brisk hour and a half, the cast members comes out to take their bows as the audience applauds excitedly.

“Crime and Punishment” held its first public performance April 8, making it one of the inaugural events of the 2015 Butler ArtsFest.

Butler ArtFest lasts from April 9 through April 19 and includes more than 50 events put on by Butler students, faculty and professional artists.

On any given day of the festival, one can attend musical performances, art shows, lectures, ballets and theatrical productions.

This event, run by the Jordan College of the Arts, provides a showcase for the talents of the many art students here at Butler.

For the cast and crew of “Crime and Punishment,” the experience is a culmination of many weeks of hard work.

“It was sort of whirlwind,” said senior Tamara Bodnar. “We really only had three or four weeks of intense, focused rehearsal.”

Though the audience only sees an hour and a half of the finished product, it requires a lot of practice and dedication for all involved.

“Everyone knows how much work and time it takes to play basketball or football or whatever it is, but the amount of time and effort that goes into things like making a script, learning your character, and deciding how to present yourself onstage is just as time-consuming,” said sophomore Alexander Borrello.

“It’s important for other people to see that. That there are other outlets for people to express themselves.”

It is a common refrain among the students that ArtsFest brings exposure to a part of Butler’s community that is often overlooked.

“A lot of time in our society the arts get pushed to the backburner and a lot of people don’t pay attention to them unless you’re actually involved in them” said freshman Jeff Bird.

“I think it is nice that Butler is actually bringing arts to the forefront.”

Freshman Evie Davis said he agrees. “ArtsFest is really great because the arts that are on campus here at Butler get shared with the entire Butler community and with the Indianapolis community. I just think it’s important that we get a small spotlight”

ArtsFest is a recent addition to Butler.

It began under current dean of Jordan College of the Arts Ronald Caltabiano, who also serves as artistic director for the event.

The recent addition of the Howard L. Schrott Center for the Arts is what prompted its invention, and many ArtsFest events take advantage of Schrott’s space.

Among those is Carmina Burana, a performance of Butler University’s choirs that marks the culmination of ArtsFest.

Butler professor John Perkins will conduct around 160 singers and musicians in this cantata based on a collection of medieval poems.

“They are pretty raucous texts,” laughs Perkins. “It’s pretty anti-establishment: everything from political statements to the worship of the pagan gods.

This selection fits in well with ArtFest 2015’s theme of “Outlaws and Outsiders,” a topic embodied in many of the events.

Perkins is a bit of an outsider himself as a first-year professor at Butler, but he said he feels excited about the opportunity to bring the magic of music to a wider audience.

“For me, it gets into the issue of why I wanted to be an artist in the first place,” he said. “Which was to show human emotion, to show human activity in a way that can’t be just spoken with words.

“There’s such electricity in the room in a live performance. If the performers are doing it right, then everybody feels it.”

So far, people seem to be receptive.

“It really brings the community out. We’ve seen packed houses almost every night,” Perkins said. “Which is pretty great.”

ArtsFest runs until April 19. More information can be found on the Butler website.