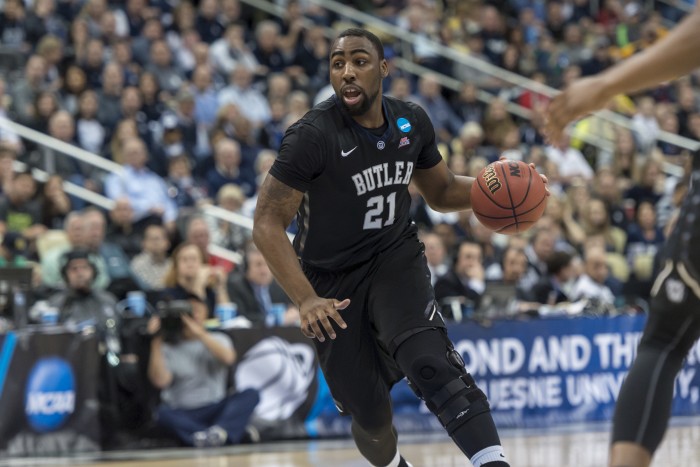 A close victory over highly ranked University of North Carolina during an in-season tournament. A split in home-and-home games with rival Xavier University. A 6-seed in the NCAA Tournament. A hard-fought victory in the first round, and a failed opportunity to win the game in the final possessions of a thrilling performance with a spot in the Sweet 16 on the line.

These statements all apply to the Butler men’s basketball team this season. But, strangely enough, they are all applicable to the 2012-13 Bulldogs as well.

Many fans remember the 2013 season as the year of the Rotnei Clarke buzzer-beater in the Maui Invitational and the Roosevelt Jones floater to beat Gonzaga University and send Hinkle Fieldhouse into the Hinkle Madhouse. But the similarities between that season and this season are uncanny, both statistically and generally.

Starting with the victories over North Carolina, in the 2012 Maui Invitational semifinals, Butler defeated then-No. 9 North Carolina 82-71 to advance. This year, the Bulldogs again met the Tar Heels and once again came away with a victory – this time in the Battle 4 Atlantis quarterfinals.

In 2013, the Bulldogs split a pair of games with rival Xavier, with each team winning on its home floor. The same was true this season, with Butler winning at Hinkle and Xavier winning at the Cintas Center.

An at-large berth and No. 6-seed in the NCAA Tournament was given to both teams, and both handled their first-round matchup for a victory.

In both instances, the Bulldogs had multiple opportunities with the ball to win their Round of 32 game during its final possessions, but came up short both times, falling in thrilling battles that featured excellent basketball and were decided by just a few plays down the stretch.

The similarities don’t end there, however.

Statistically, both teams featured a solid offense backed by a very good defense. The 2013 team averaged 69.3 points per game while this season’s team put up 69.0 per game. In 2013, the Bulldogs shot 45 percent from the floor and held opponents to just over 41.6 percent shooting, while the 2015 team finished at about 43.3 percent and 41.5 percent, respectively.

Both teams also struggled at the free-throw line at times, shooting 69.6 percent in 2013 and 68.6 percent this season.

From players who played on both teams, the similarities exist off the floor as well.

“I think something those teams had in common was a lot of grit and heart,” senior Alex Barlow said. “Both of those teams also took great pride in their defense, which is something that you don’t always see a lot of today.”

Both of those rosters also featured two seniors that played their final game in a Butler uniform in the Round of 32.

Looking deeper at those two games, the similarities stick out even more so. Both games saw the leading scorer for Butler held scoreless during the final minutes – Rotnei Clarke’s final points came with over 15 minutes left against Marquette University and Jones failed to score in the final 9:35 of regulation against Notre Dame.

Each game saw the opponent bury a game-changing three-pointer in the closing minutes – Vander Blue hit in 2013 to tie the game with just over a minute left and Steve Vasturia to make it a two possession game in overtime against Notre Dame.

And in both games, Butler had opportunities to go ahead late but failed to convert; Andrew Smith missed a game-winning attempt in 2013 and Kellen Dunham had his potential game-winner rejected before Kameron Woods missed on a lob play, sending the game to overtime.

“The thing about both of those games is that we didn’t feel like we gave them away, the other team was just a couple plays better,” Barlow added. “This late in the season having the ball late with an opportunity to win is really all you can ask for. We just didn’t convert.”

The thing that Butler will be looking to avoid in relation to the 2013 season, is the let-down season following. The Bulldogs finished under-.500 for the first time in nine years in 2013-14.

Butler will be hoping that a changed mindset can keep them heading in the right direction.

“This team understands where it is and did a good job of not letting the outside noise affect us this year,” Dunham said. “We definitely drew on some of the things people were saying about us as motivation early, but next year will be different.”

Those leaving the program via graduation don’t see another let-down season in the future, either.

“I think the biggest thing is that some of the underclassmen on this team got that taste of what it takes to win in the NCAA Tournament and compete in our conference,” Barlow said. “They saw how a successful team functions and have to build on that moving forward.”