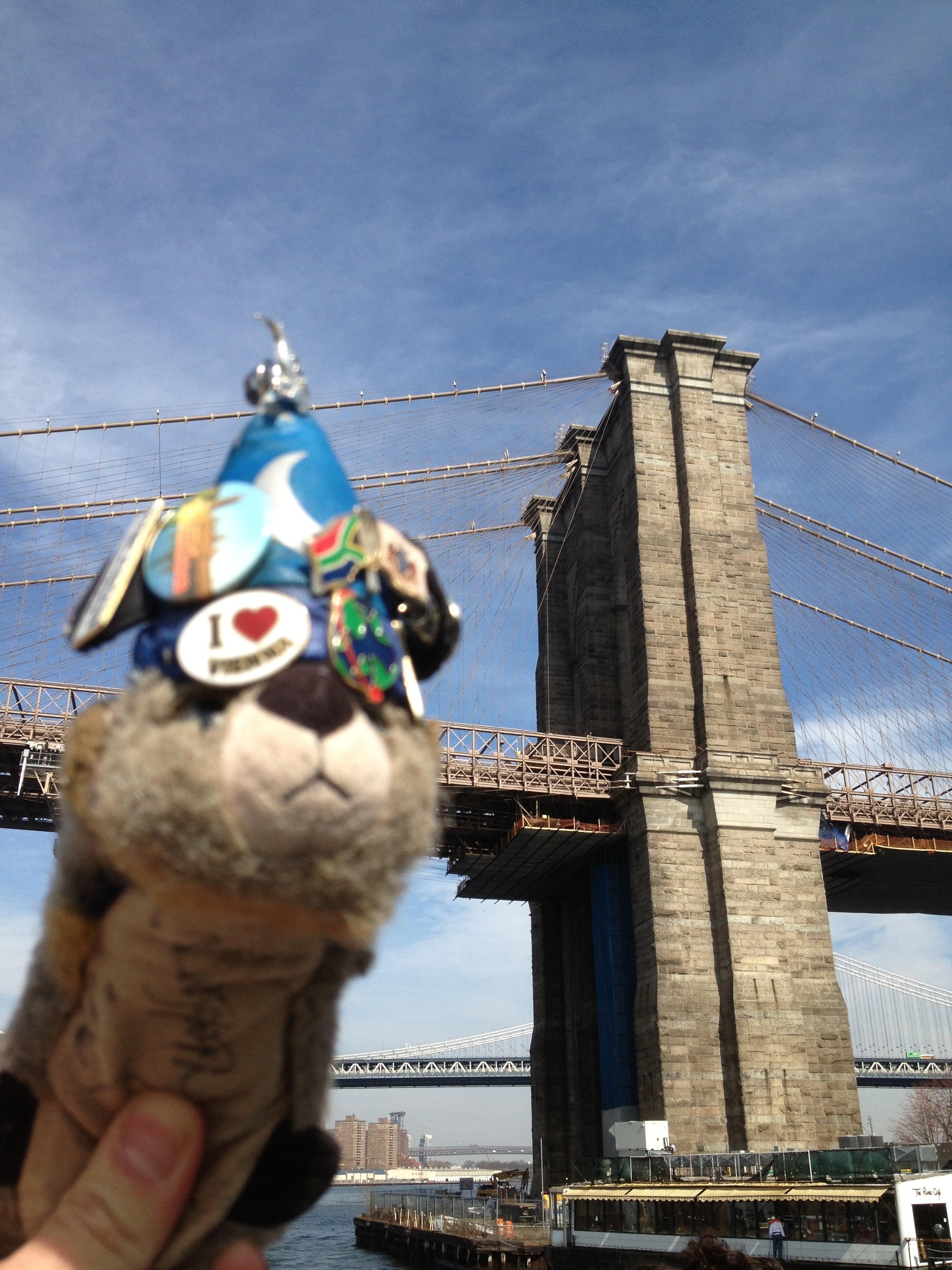 Manhattan skyline from a water taxi’s point of view.

Day three out here in New York City was a fun one, as I took a water taxi to Brooklyn’s DUMBO district. On the fairy I got a breathtaking view of Manhattan. And I also got my first glimpse of the Brooklyn Bridge and the Statue of Liberty.

But I didn’t do it alone. I came out here with a good friend of mine — the traveling beaver. Well, it’s actually more of a weasel, I think. Years and years ago my mom bought this little guy — a stuffed critter, whatever he is, that used to make goofy noises, and she began sending him with friends and family on trips all over the world. The beaver has been to every continent but Antarctica. He’s covered much of the United States. He dons a wizard’s hat from Disney world and several pins from various places — Hawaii, Vienna, and New Zealand just to name a few.

The Beery family’s “traveling beaver” has been all over the world and is ready for the Big East Tournament this week.

Today the beaver once again explored New York, and our day of exploration was great. I think I ate the best pizza

I’ve ever had — even topping Carmine’s from my first night here — at Grimaldi’s Coal Brick Oven Pizzeria. It was amazing, and I topped it off with a concrete from the Shake Shack.

We headed back to Times Square where we found ourselves on the giant video screen. I helped him pose in front of the large buildings, but my favorite photo he took today was with Woody and Buzz and other characters.

I planned on getting a quick dinner by the subway, but as I was heading up to see Central Park for the first time, I got distracted and checked

out Ellen’s Stardust Diner. I just had a salad and a cup of coffee, but I had a blast taking in the famous singing waitstaff, made up of aspiring Broadway actors. I definitely recommend this place.

But perhaps my favorite part of my night was when I arrived at Penn Station under Madison Square Garden. Upon stepping off the train I saw a Villanova fan. I then walked out onto the street where I saw a sea of royal blue; Creighton fans and Seton Hall Cheerleaders and band members made their way towards the arena. And to top it all off, a group of Marquette fans came chanting and dancing down Seventh Avenue.

And that’s when it finally hit me. This is the Big East Tournament. As if it wasn’t true before today, I officially can’t wait to get back over to Manhattan Thursday and start

covering this tournament. While I briefly attended an event at the Butler fan headquarters at American Whiskey, seeing some familiar faces and meeting some new Butler alums, it will be great to see some more Bulldogs fans tomorrow, and it will certainly be great to see some basketball.

As a reminder, be on the lookout for my preview of the Butler-Xavier game, which tips around 9:30 p.m. on FOX Sports 1, following the Georgetown-Creighton game that starts