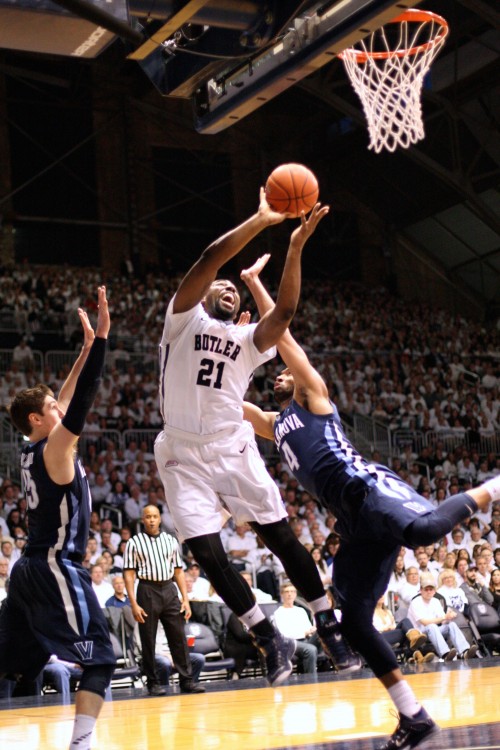 Indiana basketball was showcased when the spotlight was brightest on Saturday night. Butler faced Notre Dame in the Round of 32 with a trip to the Sweet 16 on the line. It took an extra period, but the Irish outlasted Butler for a 67-64 overtime win that ended Butler’s season.

After holding Notre Dame (31-5) in check from behind the 3-point arc during most of regulation, Butler gave up two key 3-point baskets in overtime. Steve Vasturia hit the second one to give the Irish a 65-61 lead with 1:21 to play, a lead they would not relinquish. Vasturia scored a team-high 20 points.

Senior Alex Barlow fouled out of the game with 3:53 to go in overtime, leaving Butler without a key piece on the defensive end. Barlow had two points, five rebounds, three assists and two steals in his final game as a Bulldog.

Both teams had opportunities to win the game at the end of regulation. The Bulldogs had the ball with 20 seconds to play, and Jones drove in for a layup. He missed, and Notre Dame got the rebound. The Irish were called for a double-dribble with two seconds remaining, allowing Butler (23-11) to set up a last-second play.

Kellen Dunham had a 3-point attempt blocked, and the ball went out of bounds with 0.6 seconds to play. Jones inbounded the ball to Kameron Woods, who missed a tip-in attempt.

Dunham was held to eight points on 2-of-13 shooting.

Butler was 0-for-6 from the field over the last 2:57 of regulation, while Notre Dame was 0-for-2 with three turnovers.

The game was a back-and-forth affair throughout. Butler trailed by as many as 10 with 7:47 to play in the first half, but cut the deficit to two going into halftime. The Bulldogs went on an 11-0 run midway through the second half and led by six with 9:37 to play, but an 8-0 Notre Dame run gave the Irish a 2-point lead. After a Vasturia jumper gave Notre Dame a 3-point lead with 3:17 to play, Dunham tied the game with a deep 3-pointer to finish the scoring for either team in regulation.

Jones paced the Bulldogs on offense, scoring a game-high 23 points after spraining his knee in Thursday’s game against Texas. He also had five rebounds, three assists and two steals. Andrew Chrabascz added 20 points.

With the win, Notre Dame advances to the Sweet 16 for the first time in 12 years. The Irish await the winner of 7-seed Wichita State and 2-seed Kansas.